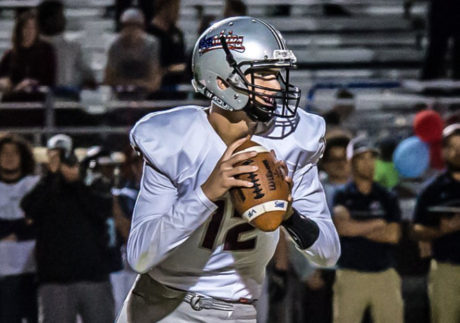 Orlando (FL) Dr. Phillips offensive tackle John Campbell was offered by Michigan. He’s a 6’5″, 284 lb. prospect with offers from Alabama, Auburn, Florida, Georgia, LSU, Miami, and a bunch of others. He’s a 3-star, the #28 offensive tackle, and #419 overall. Michigan has recruited Dr. Phillips a fair amount over the years – including Demetrius Hart, Ricardo Miller, and Robert Porcher IV – but without much success.

Chandler (AZ) Hamilton quarterback Tyler Shough was offered by Michigan. He’s a 6’4″, 187 lb. prospect with offers from Indiana, Missouri, and South Carolina, among others. He’s a 3-star, the #20 pro-style quarterback, and #551 overall. This may be in response to Las Vegas (NV) Bishop Gorman quarterback Dorian Thompson-Robinson rumored to be leaning toward UCLA, but Shough’s less impressive offer list may lead him toward Ann Arbor, though he has yet to even visit. As a junior in 2016, Shough was 142/230 (61%) for 2,089 yards, 27 touchdowns, and 9 interceptions.

END_OF_DOCUMENT_TOKEN_TO_BE_REPLACED

St. Louis (MO) Christian Brothers wide receiver Kamryn Babb was offered by Michigan. Babb is a 6’1″, 189-pounder with offers from Auburn, LSU, Miami, Missouri, Nebraska, Notre Dame, and Ohio State, among others. He’s a 4-star, the #13 wide receiver, and #86 overall. He has already been selected for the 2018 U.S. Army All-American Bowl. As a sophomore in 2015, he caught 39 passes for 832 yards and 8 touchdowns.

Brooklyn (NY) Erasmus Hall wide receiver Aron Cruickshank was offered by Michigan. He’s a 5’10”, 165-pounder with offers from Ohio State and Syracuse. Cruickshank is very slight and plays a lot of quarterback for his high school team, but his future is at receiver or maybe cornerback. Erasmus Hall is the school that produced Curtis Samuel.

Hit the jump for more on 2018 recruiting.