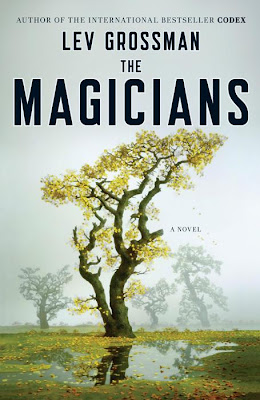 The Magicians by Lev Grossman
If Harry Potter had “relations” with Hermione Granger, met up with a Bret Easton Ellis character, found a Portkey to the Wood Between the Worlds, and then faced off with a ‘roid raging Lord Voldemort . . . that might begin to approximate the events in The Magicians.

A Brooklyn high school student named Quentin has an unhealthy level of interest in a magical place named Fillory, which is essentially C.S. Lewis’s Narnia. With few friends and not much of a relationship with his family, Quentin finds a Hogwarts-like school named Brakebills. He finds that he fits in well with the school and some of the other students, and being infatuated with magic, Quentin devotes himself to the tedium of learning magic. Unlike J.K. Rowling’s Potter, however, Quentin isn’t exactly a leader or “The Chosen One.” He’s just a regular wizard with a shortage of self-esteem.

Amid love triangles, drug usage, and heavy alcohol consumption, a fellow student named Penny finds a magic button (sounds familiar?) that transports its possessor to the Neitherlands, an endless city of fountains that are gates to other worlds. Penny convinces Quentin and a few of their friends to visit the Neitherlands in the hopes of finding Fillory. Once Quentin finds the enchanted land that he thought was only the figment of an author’s imagination, he’s tasked with a mission to save Fillory’s equivalents of Narnia’s Aslan – two rams named Ember and Umber.

Holding degrees in comparative literature from both Harvard and Yale, Grossman doesn’t attempt to hide the derivative nature of his novel. The appearances of some of his characters and, especially, locations are almost laughable at times. He might as well be Gregory Maguire elaborating on the story of Snow White. But I suppose Snow White having a sex drive and an addiction to painkillers might sully the children’s story. The story was so dependent on the series by Lewis that I stopped mid-novel to familiarize myself with The Chronicles of Narnia, the reading of which had somehow alluded me as a child.

One issue I had with The Magicians was the inconsistent pacing. At 402 pages, there are bound to be a few slow spots. The vast majority of the novel takes place in Brooklyn and Brakebills, with only the last sliver depicting the more exciting Fillory. Only the occasional exciting event occurs at Brakebills, and while developments happen with sufficient frequency, there is a bit of a lull in the middle. Fortunately, the last section of the novel flies by at a breakneck pace, concluding with one of the most terrifying fantasy scenes I’ve read. Lord Voldemort could learn a thing or two from Grossman’s villain.

Overall, The Magicians was a fantastic read. Not only did Grossman build an excellent amount of tension, but he also has an impressively deep vocabulary. I’m a fairly intelligent individual, but more than a handful of times, I found myself cracking open a dictionary to keep up with the language. The climax left me wanting more, which is the perfect time for an author to close up shop.