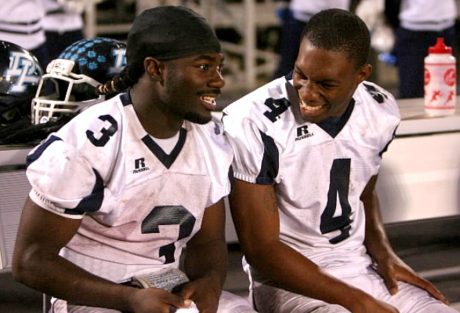 I have done my best to list as many relevant players for Michigan fans as possible using NFL.com’s Draft Tracker. Some of these players were offered by Michigan, so you may remember watching their high school highlights or hoping they would sign with Michigan three to five years ago. Some of them also attended Big Ten schools, so you may remember watching them frequently during the last three to five years.

All of them have accomplished a great feat, and special congratulations go to the guys highlighted in blue. Go Blue! 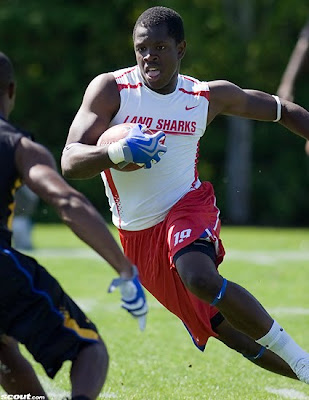 California safety/linebacker Woodson Greer
The 2011 Offer Board has been updated:

As I was keeping track of Michigan’s recruiting efforts throughout the 2010 cycle, I began to wonder where Michigan has the most success in recruiting. The obvious answers would be “in state” and “near home” and those answers held true, to no one’s surprise.

You can see in the above chart (click to enlarge) that Michigan got the best bang for its buck in contiguous states like Wisconsin and Ohio. Pennsylvania is #5 on the list.

Sitting there at #4, though, is Louisiana. Michigan got two of the six prospects who were offered, slot receiver Drew Dileo and safety Carvin Johnson. The other four were WR Trovon Reed (Auburn), QB Munchie Legaux (Cincinnati), DE Jordan Allen (LSU), and CB Ronnie Vinson (LSU). Of those four, only Legaux didn’t have an LSU offer. As I said in yesterday’s post, kids in the deep south tend to stay in the deep south if a decent local program offers. Reed spurned LSU for a school in neighboring Alabama, but Allen and Vinson jumped at the opportunity to play in the Bayou.

Moving on to Florida, that percentage might be a bit alarming. The Wolverines extended more offers to Florida than any other individual state by far – 46 offers in all, beating Ohio by 16 – but Michigan’s success rate in the Sunshine State was just below 7%. With all three commitments from Florida being 4-stars (Demar Dorsey, Marvin Robinson, Richard Ash), the kids Michigan has stolen have been elite talents. But this is something to watch in the coming years. If Rich Rodriguez continues to offer a high volume of kids from Florida, hopefully the commitments he gets remain elite players. I would hate to see the coaching staff spend such significant time and effort on Florida only to get middling recruits from the state. That being said, the coaches have done a good job there over the past couple years. They’ve established a pipeline from Pahokee (Martavious Odoms, Brandin Hawthorne, Vincent Smith, Richard Ash) and could be in the process of building a pipeline from Dr. Phillips High School in Orlando (Ricardo Miller transferred from Dr. Phillips to Ann Arbor Pioneer after committing, and 2011 prospects Demetrius Hart and Hasean Clinton-Dix have both been offered).

Rodriguez knows what side his bread is buttered on. He’ll continue to get a high volume of recruits from Michigan, Ohio, and Pennsylvania, and he’ll try to pluck a few elite talents out of Florida. Those efforts will be complemented by an occasional commitment from various other states.