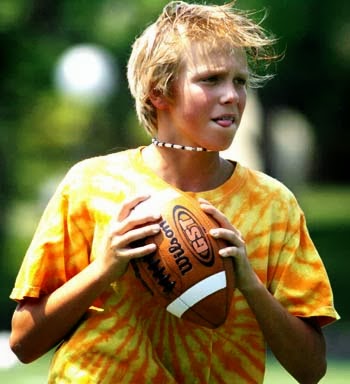 ADDED TO THE BOARD: 2015
Manassas (VA) Stonewall Jackson defensive tackle Tim Settle was offered by Michigan. He’s a 6’3″, 305 lb. prospect with offers from Alabama, Clemson, Florida, Miami, Nebraska, Notre Dame, Ohio State, USC, and Virginia, among many others. Settle is good friends with 2014 defensive end target Da’Shawn Hand, who spurned Michigan in favor of the Crimson Tide in mid-November. Settle visited Ann Arbor for the Notre Dame game in early September and came away raving about the visit, but things seem to be trending toward Alabama or Ohio State. Stonewall Jackson produced Ryan Williams in the class of 2008, who went on to play for Virginia Tech and become a second round pick of the Arizona Cardinals.

Elkton (MD) Eastern Christian Academy quarterback David Sills was offered by Michigan. I hinted at this back in September when Lane Kiffin was fired from USC, but Sills – who committed to the Trojans in seventh grade – could be on the free agent market. His “stock” has fallen considerably since that early commitment, and he is now a 247 Composite 3-star, the #22 pro-style QB in the country, and the #485 prospect overall. There have been hints that new USC coach Steve Sarkisian may want to go in a different direction. Meanwhile, Michigan has verbal commitments from 2014 wide receiver Freddy Canteen and cornerback Brandon Watson, both of whom are high school teammates of Sills. I will be posting a scouting report on Michigan’s 2015 quarterback targets soon, but my own view of Sills is that he’s a very polished prospect who lacks great athleticism and arm strength.

OFF THE BOARD
Warren (OH) Harding defensive tackle Hjalte Froholdt committed to Arkansas. Froholdt played his sophomore year at Harding, moved back to his homeland of Denmark, and plans to return for his senior year of high school in 2014 (location to be determined). It will be interesting to see if he moves closer to Arkansas for his senior year or if he re-opens his recruitment.

Gallaton (TN) Station Camp wide receiver Josh Malone committed to Tennessee. Malone never showed much interest in the Wolverines, and while he was long considered a lean to the Volunteers, Clemson was also making a push near the end. He’s the #2 receiver in the country, according to Rivals.

Kei Beckham – S – Trotwood (OH) Trotwood-Madison: Beckham is a 6’0″, 155 lb. prospect for the class of 2015. He has offers from Cincinnati, Illinois, Indiana, Kentucky, Minnesota, and some MAC schools. He’s a former teammate of freshman Michigan linebacker Mike McCray.

Hjalte Froholdt – DE – Warren (OH) Harding: Froholdt is a 6’4″, 282 lb. prospect for 2015 with offers from Alabama, Arkansas, Kentucky, Louisville, Michigan, Michigan State, Ohio State, and Penn State, among others. According to 247 Sports’ Composite rankings, he’s a 4-star, the #9 DT, and #44 player overall in his class. Froholdt attended Harding – which has sent guys like Prescott Burgess, Mario Manningham, Davion Rogers, and D.J. Williamson to Michigan in recent years – but is a native of Denmark, which is where he has been living this fall and playing in a Danish semi-pro league. He plans to return to the United States for his senior year.

Lavert Hill – CB – Detroit (MI) Cass Tech: Hill is a 5’9″, 150 lb. prospect for 2016 with no offers at this point. He’s the younger brother of freshman Michigan safety Delano Hill and has visited campus numerous times.

Joshua Jackson – QB – Saline (MI) Saline: Jackson is a 6’1″, 180 lb. prospect for 2016 with no offers at this time. He played quarterback for Ann Arbor (MI) Huron to begin the year but transferred schools mid-season and is now ineligible due to MHSAA rules. He is also the son of Michigan running backs coach Fred Jackson and the younger brother of wide receiver Jeremy Jackson.

Joshua Ross – LB – Orchard Lake (MI) St. Mary’s: Ross is a 6’2″, 190 lb. prospect for 2017 with offers from Michigan State and Oklahoma. He suffered an ankle injury that could very well cause him to miss the rest of the season, but regardless, he’s picking up some big-time offers as a youngster. He’s the younger brother of sophomore Michigan linebacker James Ross III and has visited campus for almost every Michigan home game.


Mike Weber – RB – Detroit (MI) Cass Tech: Weber is a 5’10”, 190 lb. prospect for 2015 with offers from Michigan, Michigan State, Nebraska, Ohio State, Tennessee, and Wisconsin, among others. According to 247 Sports’ Composite rankings, he’s a 4-star, the #21 running back, and the #268 player overall. As a sophomore in 2012, he had 1,700 yards and 21 touchdowns. He’s the former teammate of current Michigan players David Dawson, Delano Hill, Royce Jenkins-Stone, Jourdan Lewis, and Terry Richardson.

ADDED TO THE BOARD: 2015
St. Paul (MN) Cretin-Derham Hall defensive end Jashon Cornell was offered by Michigan.  Cornell is a 6’4″, 230 lb. prospect with offers from Florida, Notre Dame, Ohio State, USC, and Wisconsin, among others.  Notre Dame is thought to be the leader because of a couple relatively recent alumni heading to South Bend (WR Michael Floyd, WR James Onwualu), but it’s also the alma mater of OT Seantrel Henderson, who first committed to USC before ending up at Miami.  As a sophomore in 2012, he had 52 tackles, 26 tackles for loss, 14 sacks, and 3 forced fumbles.

Lakewood (OH) St. Edward cornerback Shaun Crawford was offered by Michigan.  He’s a 5’9″, 170 lb. prospect with offers from Arkansas, Florida State, Miami, Penn State, and Tennessee, among others.  As a sophomore in 2012, he had 66 tackles, 3 tackles for loss, 1 sack, 2 interceptions, 3 pass breakups, 2 forced fumbles, and 1 fumble recovery; he also had 24 catches for 438 yards and 5 touchdowns.

Warren (OH) Harding defensive end Hjalte Froholdt was offered by Michigan.  He’s a 6’5″, 265 lb. prospect with no other offers at this time.  Froholdt grew up in Denmark and played his first season of football in America (though he played the sport in Denmark, too) as a sophomore last season.  Harding is the alma mater of former Michigan wide receiver Mario Manningham, linebacker Prescott Burgess, and linebacker Carl Diggs, as well as a couple recent Michigan signees who flamed out (LB Davion Rogers, WR D.J. Williamson).

OFF THE BOARD
Upper Marlboro (MD) Wise safety Marcus Allen committed to Penn State.  In case you’re wondering, I can find no indication that he’s related to the  Marcus Allen . . . you know, the one who ran for over 2,300 yards in one season at USC, won the Heisman, and was the second best Los Angeles Raiders running back in Tecmo Bowl.  The younger, unrelated Allen never showed significant interest in Michigan.

MISCELLANEOUS
Here’s a list of the visitors from this past weekend.