A couple days ago, I reported that Holmes Onwukaife committed to Michigan. There was a Rivals post from one of the mods stating he was committing and confirmation from Tom VanHaaren, MGoBlog’s official recruiting resource.

We heard nothing official for a couple more days, and then there’s this Onwukaife quote from Josh Helmholdt this morning:

I apologize for the error in my reporting.

That being said, I did call the switch to inside linebacker, so I’ve got that going for me, I guess . . . 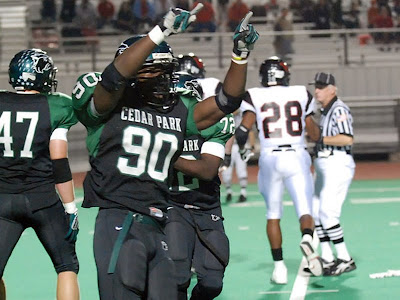 The commitment of Jordan Paskorz a couple weeks ago set off a Domino effect in Michigan’s recruiting. The OLB/DE from Pennsylvania preceded a commitment from OLB/DE Ken Wilkins (also from Pennsylvania), which preceded a pledge from the newest member of the 2010 class, Holmes Onwukaife. Onwukaife is another LB/DE, albeit from Cedar Park, Texas, not the Keystone State.

Onwukaife played defensive end in a 3-4 scheme as a junior, meaning he was lined up on the inside shoulder of the offensive tackle much of the time. According to his coaches, he will switch to OLB in the 3-4 scheme, meaning he’ll be playing more in open space and getting a clearer lane to the quarterback. Even as a DE last year, he racked up 50 tackles and 9 sacks. According to this Rivals article, Onwukaife is being recruited by Michigan to play OLB.

All those things being said, the Wolverines are beginning to run into the same issue at OLB (the “quick”) as they are at wide receiver on offense; there is such a glut of talent (unproven talent, but talent nonetheless) that some of these guys must be headed for a position change or a decommitment. Not only does Michigan have commitments from Paskorz, Wilkins, and Onwukaife, but incoming freshmen Craig Roh and Anthony Lalota have been told they’ll get a look at the Quick, and UM veterans Brandon Herron, Marell Evans, and Steve Watson are all currently vying for playing time at the position. That’s eight guys fighting for one spot in 2010.

I’m wondering if the coaches also see an opportunity for Onwukaife to play inside linebacker. He’s too small to play DE, so he’s some sort of linebacker all the way. In watching his video, I don’t really see a ton of potential as a rush linebacker. I think he would get consumed by good offensive tackles, and his first step isn’t quick enough to beat those guys to the outside consistently. Onwukaife does a good job of disengaging from blockers and not taking them head on. He also has some very raw athleticism; he has an ability to chase down players from sideline to sideline and a crafty ability to sidestep blockers.

On the flip side, Onwukaife does what too many superior high school players do – he tackles with his arms. Instead of running through the ballcarrier, he makes contact only with his arms and tries to twist the runner to the ground rather than bury him into the turf. This is a technique that can be taught, so it’s not a huge concern, but considering all of the failed arm tackles we saw at Michigan this past year, it’s something that needs to be corrected before he sees the field in college. As I said above, I also question the quickness of his first step. On top of those things, Onwukaife also seems to loaf at times. Judging from his body language, I don’t think it’s laziness – I think he’s a split second slow at diagnosing plays and since he was playing out of position, he seemed to be thinking too much, rather than reacting. But most of his faults seem to be technical, meaning that a couple years of learning should head him in the right direction.

All things considered, I believe Onwukaife could end up at inside linebacker. The lack of inside linebackers and the glut of outside linebackers make me think so. I don’t know how Onwukaife would react to playing in the middle and diagnosing plays from that position, but he has the athleticism and the body to play at the second level. He’s an intriguing prospect to me because he’s so raw – he could be great or he could never see the field. Here’s hoping it’s the former.