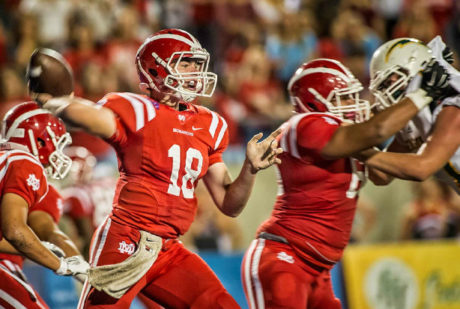 Cincinnati (OH) Walnut Hills defensive tackle Jowon Briggs was offered by Michigan. He’s a 6’2″, 275 lb. prospect with offers from Cincinnati, Kentucky, Ohio State, and Wisconsin, among others. Briggs is a bit sawed-off and looks like a pure nose tackle right now, but he’s only a sophomore and could add another inch or two to his height before he stops growing. He does a very nice job of using his hands, creating separation, and using leverage to beat offensive linemen.

Santa Ana (CA) Mater Dei wide receiver Horace “Bru” McCoy was offered by Michigan. He’s a 6’3″, 205 lb. prospect with offers from Alabama, Notre Dame, Oregon, USC, and Washington, among others. A teammate of Daniels, McCoy plays some wide receiver and linebacker, and he could end up at either of those two positions or at safety in college. You can see his highlights here (LINK).