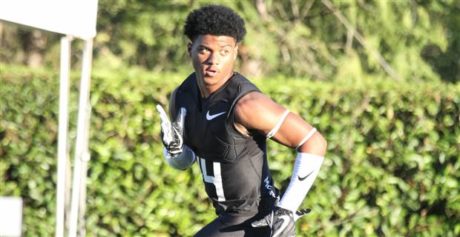 Indianapolis (IN) Lawrence Central linebacker Cameron McGrone committed to the Michigan Wolverines on Monday. He chose the Wolverines over offers from Indiana, Iowa, Nebraska, Notre Dame, and Purdue, among others.

Hit the jump for more on McGrone’s commitment.

END_OF_DOCUMENT_TOKEN_TO_BE_REPLACED

Kirkland visited Michigan numerous times throughout the recruiting process, including several times before he was offered. He was clearly hoping for an offer from the Wolverines, but the coaches took their time in evaluating him. At one point Kirkland’s father mentioned that if an offer didn’t come soon, Darrin the younger would have to look elsewhere, which was an indication that Michigan was at least one of his top couple schools, if not #1. In the meantime, offers rolled in from Penn State, Wisconsin, Tennessee, and Ole Miss. Then on April 4th, the offer from the Wolverines was extended. Shortly thereafter, Kirkland set a commitment day for May 30th, which was soon canceled after he picked up tenders from Oklahoma and Texas. He then said that he wanted to commit in August before his senior season began. On an unofficial visit to Ann Arbor this weekend, he unexpectedly committed, pulling head coach Brady Hoke out of church to do so.

Kirkland has the thickness of a prototypical middle linebacker. He’s a very stout player who won’t get pushed out of position and won’t get run over. He shows some good tackling ability and could be a menacing force as a thumping middle linebacker. While he doesn’t have great speed, he does show some solid short-area quickness and agility, which helps him avoid blockers and make some plays in confined spaces. He plays with good intensity and emotion, which is a plus for a defender.

I am not a fan of some of Kirkland’s habits, which may have more to do with his coaching. First of all, his stance is not consistent; he is not balanced and tips his blitzes. Also, I would like to see him taking a read step toward the line of scrimmage at the snap, but he mostly sits and waits until he reads the play. This concerns me because it may indicate some problems with play recognition. Kirkland does a poor job of engaging blockers, taking them on with his shoulder instead of his hands; at times he almost looks surprised when he gets blocked. As for athleticism, he lacks great speed and his feet are somewhat heavy, so he looks like a run-stopping specialist.

Overall, I think Kirkland has some positive qualities but does not look like a superstar in the making. He looks like an old-fashioned middle linebacker who can be effective against run-oriented Big Ten teams like Michigan State and Wisconsin. But he looks like a two-down linebacker who might find his lack of athleticism exposed against passing-oriented or spread teams. Ohio State ran all over Michigan last year with Carlos Hyde, so I see a need for players like Kirkland. The question is: how versatile can he be? I see him as a 3-4 inside linebacker, but he probably fits at MIKE for the Wolverines. The nearest approximation I can come up with from recent years is J.B. Fitzgerald, who made 58 tackles, 7 tackles for loss, and 1 sack from 2008-2011.

The Wolverines lose two senior inside linebackers after the 2014 season in the forms of Desmond Morgan and Jake Ryan. When Kirkland arrives in 2015, he will be competing with senior Joe Bolden, junior Ben Gedeon, redshirt sophomore Mike McCray, and potentially sophomores Michael Ferns and Noah Furbush, although we have seen that positions are fluid with Michigan moving from the 4-3 Under to the 4-3 Over this off-season. A redshirt seems like a 50/50 proposition.

Kirkland is Michigan’s seventh commitment in the class of 2015, a class that is currently scheduled to be roughly 13-strong. He’s the first commitment from Warren Central since mid-1990’s running back Ray Jackson. Before the commitment of Dan Samuelson in the 2013 class, it had been since 2008 (Kurt Wermers) that Michigan had gone without successfully recruited someone from the Hoosier State. With such a small class, this may spell the end of inside linebacker recruiting. The staff still wants a running back or two, a couple offensive linemen, at least one tight end, and at least one defensive end. However, the class’s numbers will inevitably grow by next February.

Highlights can be found on Hudl (LINK).