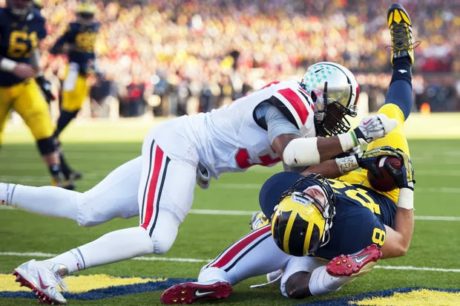 Jake Butt out indefinitely with a torn ACL

Sophomore tight end Jake Butt will miss an indefinite amount of time after suffering a torn ACL during offseason conditioning. Butt had 17 catches for 202 yards and 2 touchdowns in his inaugural season.

Butt will certainly miss spring practice, and it’s unclear how much of his 2014 season will be lost. Projected to be the starting tight end for the upcoming season, the job will now be left to junior A.J. Williams, fifth year senior Jordan Paskorz, redshirt freshman Khalid Hill, and freshman Ian Bunting. It may also affect hybrid receiver Devin Funchess, who was expected to stick at wideout this year but may be pressed into more duty as a tight end.

The Wolverines have suffered several ACL injuries in the last 12 months, including linebacker Jake Ryan, offensive guard Joey Burzynski, quarterback Russell Bellomy, and running back Drake Johnson. All four of those players were either #1 or #2 on the depth chart at their respective positions last season. 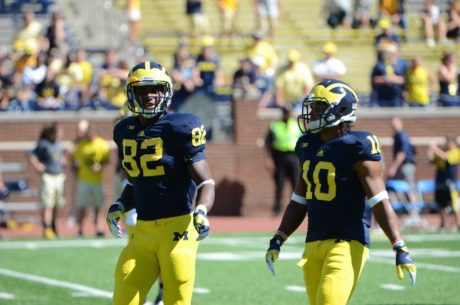 Amara Darboh out for the season

Sophomore wide receiver Amara Darboh will miss the 2013 season after injuring his foot last week, an injury that requires surgery. He was expected to be a starting wideout this fall, and various people were suggesting he would be an acrobatic Spider-man reeling in diving and one-handed catches. Not anymore, at least not until maybe a bowl game or the 2014 season.

Despite being pegged as a starter opposite Jeremy Gallon, I ranked Darboh as the 25th-most important player in the 2013 Season Countdown. I’m not quite on the bandwagon that thinks he’ll be a star wide receiver, although I think he’ll be a solid player. I’ve long suggested that redshirt freshman Jehu Chesson will be the better player in the long run, so this should give Chesson a few more opportunities to produce. The Wolverines also have a trio of seniors in the form of Drew Dileo, Jeremy Jackson, and Joe Reynolds, as well as a trio of true freshmen in the form of Jaron Dukes, Da’Mario Jones, and Csont’e York.

Teams always face injury issues, and this is just another example. Last year freshman defensive lineman Chris Wormley tore his ACL around this time, and sophomore Blake Countess tore his ACL in the first quarter of the opener. Darboh joins redshirt sophomore quarterback Russell Bellomy on the list of guys expected to miss the season, and redshirt junior linebacker Jake Ryan is out until late this fall with an ACL tear; would-be redshirt sophomore linebacker Antonio Poole took a medical hardship in the off-season after dealing with a chronic upper body injury.

Another year, another debilitating injury to a key player.  Last year it was Blake Countess and, to a lesser extent, Denard Robinson.  In 2010 it was Troy Woolfolk and J.T. Floyd.  This year it’s redshirt junior Jake Ryan, who had 88 tackles, 16.5 tackles for loss, and 4.5 sacks, along with 4 forced fumbles, 1 fumble recovery, and 3 pass breakups from the outside linebacker position last year.  He tore his ACL at practice on Tuesday morning, and with the season less than six months away, chances are slim to none that he will be fully recovered for the beginning of the year, and perhaps not for the entire season.

The effects of Ryan’s loss will be significant.  He was the starting SAM linebacker the past two seasons and in 2012, he led the team in tackles, tackles for loss, sacks, and forced fumbles.  On passing downs he often put his hand down as a defensive end and rushed the passer.  He’s a whirling dervish with a nose for the football and one of Michigan’s lone pass rushing threats; on top of that, he was an emotional leader and one of the guys who could be counted on to make a play or two a game to spark the defense.  Yours truly picked him as the most underrated recruit in the 2010 class, and that was certainly proving to be true prior to the injury.

The question is: What does Michigan do now?

Option #1: Fifth year senior Cameron Gordon would presumably move into the starting role.  When healthy, he’s been the backup to Ryan for the past couple seasons.  The 6’3″, 233-pounder made 17 tackles and 3 tackles for loss in 2012; as a safety and linebacker in 2010, he was a Second Team Freshman All-American with 77 tackles, 3.5 tackles for loss, 3 interceptions, 4 pass breakups, and 2 fumble recoveries.  He’s a capable player but without the star quality of Ryan.

Option #2: Move junior Brennen Beyer from weakside end back to SAM.  Beyer played outside linebacker as a true freshman in 2011, making 11 tackles as a backup.  He has recorded just 1/2 a tackle for loss in two seasons and forced just 1 fumble, so he’s not much of a playmaker.  But if he could shed a few pounds from his bulked-up, 6’3″, 254 lb. frame, he could be serviceable at his old position.  Meanwhile, Michigan has junior Frank Clark and sophomore Mario Ojemudia at weakside end, both of whom played last year and have flashed big-play ability at times.

Option #3: Move sophomore Joe Bolden from middle linebacker to SAM.  Bolden is a 6’3″, 222 lb. kid with some playmaking ability who has the height and length to hold his own at SAM, but he would need to add some weight in order to hold the edge.  He had 31 tackles, 4 tackles for loss, and 1 sack as a freshman in 2012.  In the meantime, Michigan has a decent selection of players to man the inside linebacker spots, including my presumed starters there (Desmond Morgan and James Ross), fifth year senior Mike Jones, redshirt sophomore Antonio Poole, or redshirt freshman Kaleb Ringer; a couple freshmen will arrive in the summer (Ben Gedeon and Mike McCray).

Option #5: Move sophomore Mario Ojemudia from weakside end to SAM.  Ojemudia is 6’3″, 244 lbs. and played a chunk of time in 2012, notching 11 tackles, 2.5 tackles for loss, 1 sack, 1 interception, 1 forced fumble, and 1 fumble recovery.  This would likely be contingent on keeping Beyer at weakside end, since Michigan can’t really afford to move two of their three experienced weakside ends to linebacker.

Option #6: Do something wild.  Lightly regarded redshirt junior Jordan Paskorz was an outside linebacker before moving to tight end last spring, but he has played in just one game so far.  Sophomore Royce Jenkins-Stone is just 6’2″ and 215 lbs., and he balked at the idea of playing SAM in the hopes of being a middle linebacker, but the coaches could force his hand.  Incoming freshman Wyatt Shallman was recruited as a running back, but he played defensive end in high school and could see a chance for playing time at SAM once he arrives on campus.

Option #7: Just say “F*** it” and run a nickel the whole time.  In Greg Robinson’s inaugural defense in 2009, he put converted safety Steve Brown at SAM, and Brown had a decent season despite being around 210 lbs.  Perhaps someone like Marvin Robinson could have success in a similar role.

Offensive lineman Christian Pace has received a medical scholarship and will no longer play for Michigan.  Pace was a member of the 2010 class and represented the entirety of the offensive linemen that committed to Michigan that year.  He suffered a shoulder injury in practice during the season that will prevent him from continuing his football career, at least in Ann Arbor.  This is disappointing, since it leaves the offensive line woefully thin and might make it more necessary for a freshman like Chris Bryant to see playing time in 2011.  It’s also disappointing because Pace looked like a solid player coming out of high school and could have developed into a quality college offensive lineman.

Once David Molk departs after the 2011 season, the depth at center will consist of redshirt senior Rocko Khoury, redshirt freshman Jack Miller, and any freshmen who can potentially contribute there (perhaps Caleb Stacey); redshirt seniors Ricky Barnum and Elliott Mealer would also be available to play center, if necessary.

Eighteen months after National Signing Day 2010, only 17 of the 27 signees remain with the program.

Various reports indicate that redshirt sophomore cornerback J.T. Floyd broke his ankle in practice.  If true, this would presumably eliminate him from competition for the remainder of the season.

This is why it would be a good idea to keep around guys like Justin Turner.  Or make sure that your star defensive back recruit (Demar Dorsey) has good enough grades to get into college.  Michigan now has only 32 healthy scholarship players on the defensive side of the ball, and that includes Mike Martin, whose bum ankles don’t exactly make him healthy.

UPDATE: Rivals is reporting that X-rays of Floyd’s ankle were negative, but is likely out for at least this weekend’s game against Illinois.