RUSH OFFENSE vs. IOWA RUSH DEFENSE
Michigan is #9 nationally in rushing with 225 yards/game and tied for #16 in yards per carry (5.25). Hassan Haskins leads the team with 244 carries for 1,232 yards (5.1 yards/carry) and 18 touchdowns. His rushing load has picked up significantly since Blake Corum suffered a high ankle sprain, resulting in Haskins averaging 26.5 carries per game over the final four weeks of the regular season. Haskins has 8 touchdowns over the stretch. Luckily, Corum returned last week to the tune of 6 carries for 87 yards, so a little bit of lightning is back to join Haskins’s thunder. Michigan is #1 in the country in tackles for loss allowed with just 2.0 per game. Iowa averages 4.58 tackles for loss per game, which is tied for 111th in the nation. They’re led by senior defensive end Zach VanValkenburg (6’4″, 267 lbs.) with 11.5 TFLs. Nose tackle Logan Shannon (6’0″, 289) and defensive tackle Logan Lee (6’5″, 277) man the middle with technique and quickness more than brute strength. The defense is led by junior middle linebacker Jack Campbell (6’5″, 243), who has 124 tackles. He’s paired with 6’1″, 229 lb. weakside linebacker Seth Benson, who has 89 tackles. Senior safety Jack Koerner (6’0″, 204) is third on the team with 75 takedowns. It’s a relatively stationary defense, but they’re good and well coached. They’re #14 in rush defense (106 yards allowed/game) and #8 in yards allowed per carry, at just 2.97. They won’t stop you in the backfield, but they will gang tackle you shortly beyond the line of scrimmage.
Advantage: Michigan

Let’s see more of this guy on offense . . . Tru Wilson. Wilson had 4 carries for 28 yards in a little bit of action on Saturday. One reason he has not played much so far this year is because of a broken hand he suffered in camp. Another reason is that freshman Zach Charbonnet has shown promise, but Charbonnet has some vision issues and hasn’t developed the patience required.

Enjoy Michigan football. I’ve seen a lot of complaints about Michigan’s offense, which we will indeed discuss. But those complaints are probably coming from a lot of the same people who have said Jim Harbaugh can’t win big games against tough opponents. Iowa was 4-0 and ranked #14 coming to Ann Arbor. It wasn’t a pretty win, but it counts the same in the Big Ten standings as a win over Ohio State or Rutgers.

RUSH OFFENSE vs. IOWA RUSH DEFENSE
Michigan is kinda bad at running the ball. They rank #94 nationally (131 yards/game), and the 3.48 yards per carry is even worse at #106. Those numbers could be better if the option runs were actually options, but Shea Patterson won’t keep the ball and Dylan McCaffrey got knocked out cold the last time he did. It doesn’t appear to matter who lines up at running back right now, because the offensive line doesn’t want to move anyone off the ball. Iowa is #10 in rushing defense (77 yards allowed/game) and #36 in yards allowed per carry (3.42). No team has topped 91 rushing yards this season. Senior linebacker Kristian Welch (6’1″, 239 lbs.) leads the team with 31 tackles, and sophomore Djimon Colbert (6’1″, 235) is second with 23. Sophomore defensive tackle Daviyon Nixon (6’3″, 309) leads the squad with 2.5 tackles for loss. This looks like a bad matchup for the Wolverines.
Advantage: Iowa 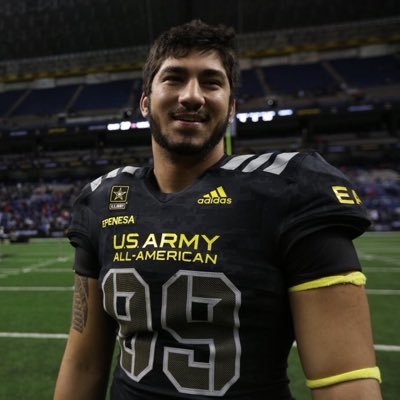 Cream of the 2017 Crop: The Hawkeyes landed their to player very early in the process with Edwardsville (IL) Edwardsville defensive end A.J. Epenesa in January of 2016. The 5-star, #2 strongside end, and #29 overall player went on to play in the U.S. Army All-American Bowl. Despite a bunch of powerhouse teams trying to pull Epenesa away, the Iowa legacy stayed committed. Mt. Vernon (IA) Mt. Vernon offensive tackle Tristan Wirfs, another Army Bowl participant, is a 4-star, the #31 offensive tackle, and #327 overall. He did impress during Army week, but he’s Iowa’s only other player above a 3-star ranking.

Cream of the 2018 Crop: The cream hasn’t really risen to the top. Both of Iowa’s commits are ranked in the 900s. One is Crystal Lake (IL) Prairie Ridge offensive guard Jeffrey Jenkins, and the other is Thiensville (WI) Homestead linebacker Mike Bruner.