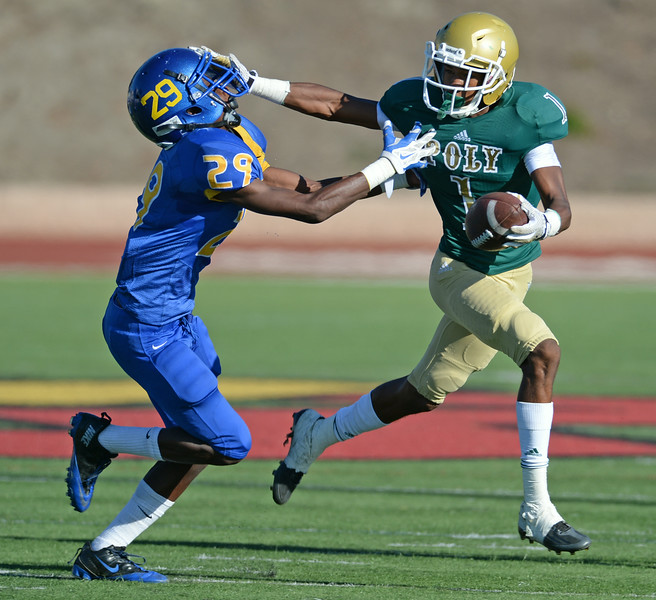 (NOT QUITE) ADDED TO THE BOARD: 2015
Concord (CA) De La Salle safety Je’Vari Anderson has been rumored to be working toward attending Michigan. Anderson is a 6’1″, 200 lb. prospect who reported offers from Cal, Oregon State, and Utah. He’s a 247 Composite 3-star, the #63 safety, and #902 overall. Anderson has reportedly been held back by the lack of an SAT score (or at least a qualifying SAT score) and needs that to qualify. However, the deadline for signing a National Letter of Intent – which he did not do in early February like most football prospects – is rapidly approaching on April 1, 2015. From my understanding, he can still qualify and join a football program in the fall even if he doesn’t sign by that date, but he will not be able to participate in football practices or receive a scholarship until the first day of classes. Whereas most freshmen arrive in June, start classwork over the summer, and start practicing in early August, he would virtually be forced into redshirting because he could not practice until the first day of the fall semester, which is September 8th. By that time Michigan will have played the game against Utah. Anyway, Anderson is a pretty impressive athlete who has some skills as both a running back, safety, and special teams player. If Michigan is indeed trying to get him to join the program, I think they will be getting a potential starter, not just a late wish-and-prayer gamble, although the academic side could be a concern in the long run. Additionally, Anderson is a teammate of a couple 2016 Michigan offerees in center Boss Tagaloa and tight end Devin Asiasi. If Anderson ends up wearing a winged helmet, that could help with those two players, whom Michigan is pursuing hard.

ADDED TO THE BOARD: 2016
Washington (DC) St. John’s tight end Devante Brooks was offered by Michigan. He’s a 6’5″, 230 lb. prospect who committed to Tennessee in January; he also has offers from Iowa, Maryland, North Carolina, and West Virginia, among others. He’s a 247 Composite 4-star, the #10 tight end, and #225 overall. Brooks is pretty solid to the Volunteers but may consider taking some visits.

Houston (TX) Westside defensive tackle Jordan Elliott was offered by Michigan. He’s a 6’4″, 305 lb. prospect who committed to Baylor in January and holds offers from Alabama, Florida State, Oklahoma, and Texas, among others. He’s a 247 Composite 4-star, the #13 defensive tackle, and #137 overall. As a junior in 2014, he made 78 tackles, 31 tackles for loss, 12 sacks, 2 forced fumbles, and 2 fumble recoveries. He’s impressively light on his feet and quick enough to play some defensive end for his high school team. Elliott is very talented and not the type of player one would traditionally associate with Baylor, but this is more proof that the Golden Bears are moving up in the world.

Elberton (GA) Elbert cornerback Mecole Hardman was offered by Michigan. He’s a 5’11”, 170 lb. prospect with offers from Auburn, Clemson, Florida, Georgia, Notre Dame, and Tennessee, among others. He’s a 247 Composite 4-star, the #8 cornerback, and #101 overall. Hardman plays quarterback for his high school team and some colleges want him to be a receiver, but Michigan is looking at him as a corner. He is very likely to stay in SEC country and has Georgia and Tennessee as his top two schools, so getting him up north will be very difficult.

Long Beach (CA) Poly wide receiver Jack Jones was offered by Michigan. He’s a 5’11”, 170 lb. prospect with offers from Notre Dame, Oklahoma, and UCLA, among others. He’s a 247 Composite 4-star, the #4 athlete, and #77 overall. Jones could play receiver or corner in college, and with a highlight video titled “The Greatest,” anything’s possible, right? On the same day Michigan offered, he put out a top three that included the three aforementioned schools, so Michigan is playing from behind right now. He attends the alma mater of former Michigan cornerback Donovan Warren.

Hit the jump for another 2016 offer, some 2017 prospects, a guy who committed elsewhere, and some random bits.

Powder Springs (GA) McEachern tight end Christian Roberson was offered by Michigan. He’s a 6’5″, 230 lb. prospect with offers from Florida, Michigan State, and Missouri, among others. He’s a 247 Composite 3-star, the #18 tight end, and #496 overall. He’s a long, lean player who shows some nice hands and an ability to go up and get the ball. Roberson said he is not very familiar with Michigan, and a decently talented player from down there is probably going to wait and see whether more southern powers come calling. McEachern produces a lot of talented players, including offensive tackle Chuma Edoga (USC) in the 2015 class.

ADDED TO THE BOARD: 2017
La Vergne (TN) LaVergne linebacker Maleik Gray was offered by Michigan. He’s a 6’2″, 190 lb. prospect with offers from Alabama, Florida State, LSU, and USC, among others. He’s a 247 Sports 4-star, the #1 athlete, and #26 overall. Gray plays running back for his high school team, and while he has lots of good traits as a runner, he looks more like an outside linebacker at the next level.

West Union (IA) North Fayette defensive tackle Juan Harris was offered by Michigan. He’s a 6’4″, 356 lb. prospect with offers from Iowa, Tennessee, Utah, and Washington. He committed to Iowa on December 1, 2014, but the day after the Michigan offer came in, he decommitted from the Hawkeyes. There was another re-commitment and de-commitment in January, so clearly Harris is struggling with the decision process, even though National Signing Day is almost two years away for him. Harris visited Ann Arbor this past weekend. He is a wide-bodied nose tackle type who obviously needs to shed some weight.

Los Angeles (CA) Hawkins running back Greg Johnson was offered by Michigan. Johnson is a 5’10”, 185 lb. prospect with offers from Arizona State, Cal, Utah, and Washington, among others. He’s a 247 Sports 4-star, the #2 athlete, and #16 overall. Johnson could play a number of positions in college – running back, corner, safety – but he looks pretty darn good running the ball. However, I will say that his highlights should be taken with a huge grain of salt, because he is playing against kids who look like they have no clue how to play the game of football. That may partly explain why he ran for 2,371 yards and 20 touchdowns as a sophomore in 2014.

Los Angeles (CA) Hawkins wide receiver Joseph Lewis, a teammate of Johnson’s, was also offered by the Wolverines. He’s a 6’2″, 190 lb. prospect with offers from Notre Dame, UCLA, USC, Utah, and Washington, among others. He’s a 247 Sports 4-star, the #6 wide receiver, and #46 overall. Unfortunately, whoever put together the Hudl pages for both Johnson and Lewis spells their year in school as “sopohmore.” Anyway, Lewis is another good physical specimen who shows some nice speed and has good size.

Arvada (CO) Pomona offensive tackle Jake Moretti was offered by Michigan. He’s a 6’5″, 265 lb. prospect with offers from Colorado, Colorado State, and Miami. He’s a 247 Sports 4-star, the #9 offensive tackle, and #83 overall. Moretti is a nice looking prospect who has some athleticism but really needs to work on technique, as well as getting stronger. Michigan has recruited the area back in 2013 with 6’10” offensive tackle Dan Skipper (Arkansas) and 2012 offensive tackle Paul Thurston (Nebraska), although neither went to Pomona.

Madison (GA) Morgan County defensive tackle M.J. Webb was offered by Michigan. He’s a 6’5″, 260 lb. prospect with offers from Alabama, Auburn, Georgia, Penn State, and Tennessee, among others. He’s a 247 Sports 4-star, the #2 strongside end, and #39 overall. Webb plays a little too high and soft for my liking, but he does have a good idea of how to use his hands and he moves pretty well for a big guy. Despite playing defensive end in high school, I think he’s very likely to move inside at the next level, if not within the next year or two for his high school team.

Bellaire (TX) Episcopal defensive tackle Marvin Wilson was offered by Michigan. He’s a 6’4″, 300 lb. prospect with offers from Oklahoma, Texas, Texas A&M, and USC, among others. He’s a 247 Sports 4-star, the #1 defensive tackle, and #13 overall. As a sophomore in 2014, he made 67 tackles, 19 tackles for loss, and 15 sacks. Wilson is a massive force in the middle of the defensive line and probably projects as a nose tackle for the next level. He has some decent quickness for the position, though, and can be more than a space eater.

ADDED TO THE BOARD: 2018
Memphis (TN) Harding offensive tackle Will Lawrence was offered by Michigan. He’s a 6’4″, 260 lb. prospect with offers from Alabama, Auburn, Florida State, Tennessee, Texas, and USC, among others. One reason he has all those big-time offers is his feet, which are quick and never stop moving. Some outlets are saying that this is Michigan’s first offer in the 2018 class, although Maryland defensive tackle Taron Vincent (the son of Troy Vincent) reported an offer from the previous staff.

OFF THE BOARD
Thousand Oaks (CA) Westlake wide receiver Theo Howard committed to Oregon. Howard may be a sign that Jim Harbaugh’s California connection may not be as productive as we had hoped at one point. Along with quarterback K.J. Costello, wide receiver Dylan Crawford, and cornerback David Long, Jr., Howard was in a group of players interested in at least visiting Michigan and potentially playing together at the next level. A package deal like that would almost certainly not come together, but it might hint that those other pieces will not come to Michigan, either. Costello is close to deciding (likely between Stanford and USC) and Crawford is his teammate. Meanwhile, Michigan is making Long a priority at cornerback, so his case may be the most promising.

Monroe (LA) Wossman safety Cameron Lewis committed to LSU. This was essentially a foregone conclusion, even though TCU was reportedly in the mix.

O’Fallon (IL) O’Fallon running back Kentrail Moran committed to Illinois. Moran had Michigan as his top school for a long time after being offered by Brady Hoke’s staff. At one point he even said he would “probably commit soon” and he was excited about the Jim Harbaugh hire. Unfortunately for Moran, he was told by the new staff that he would have to re-earn his offer from them, something that has not happened until this point. Around the time the news came that he would need to re-earn his offer, I was working up a scouting report on him. Even before he was offered, I actually hoped that Michigan would not offer him because he seemed likely to commit and I was not particularly fond of his abilities. Now hopefully Michigan can reel in a back with some more upside.

MISCELLANEOUS
Check out the visitor list from this past weekend (LINK).

Over in Recruiting Season, I added/updated profiles for: