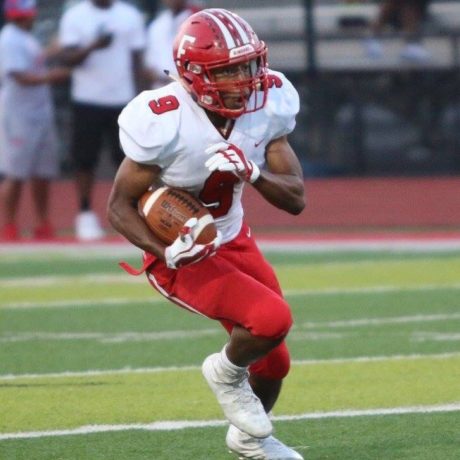 Jutahn McClain – RB – Fairfield (OH) Fairfield: McClain is a 5’10”, 175-pounder with offers from Kentucky, Louisville, and Maryland, among others. He’s a 247 Sports 3-star, the #5 all-purpose back, and #649 overall. He scored 7 touchdowns in the season opener two weeks ago and is a teammate of 2019 Michigan tight end commit Erick All.

END_OF_DOCUMENT_TOKEN_TO_BE_REPLACED 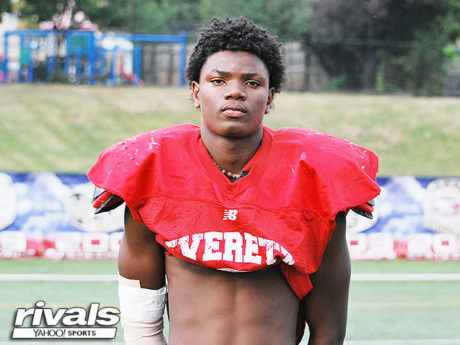 It’s time for some visits and camps, and sometimes it’s hard to determine who’s camping and who’s just visiting campus. In one capacity or another, the following players are expected to be at the University of Michigan in the coming days.

END_OF_DOCUMENT_TOKEN_TO_BE_REPLACED 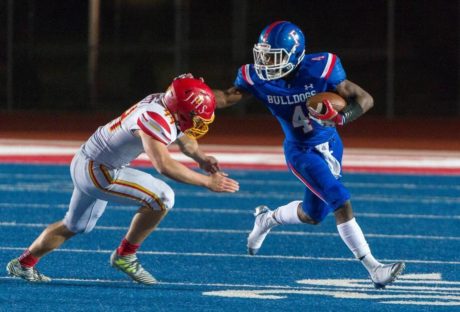 Lexington (KY) Catholic quarterback Beau Allen was offered by Michigan. He’s 6’2″, 200 lbs. with offers from Bowling Green and Kentucky. He’s a 247 Sports 3-star, the #14 pro-style quarterback, and #360 overall. Right now both of his Crystal Ball picks are for Kentucky.

Centennial (CO) Eaglecrest offensive tackle Reece Atteberry was offered by Michigan. He’s a 6’5″, 260-pounder with offers from Colorado, Colorado State, Nebraska, and Oregon, among others. He’s a 247 Sports 4-star, the #26 offensive tackle, and #206 overall.

Folsom (CA) Folsom wide receiver Elijhah Badger was offered by Michigan. He’s a 6’1″, 185 lb. prospect with offers from Florida, Oregon, and USC. He’s a 247 Sports 3-star, the #58 wide receiver, and #291 overall. He’s a teammate of 2020 running back Daniyel Ngata, who also picked up a Michigan offer recently (see below).

Hit the jump for lots and lots more offers.

END_OF_DOCUMENT_TOKEN_TO_BE_REPLACED 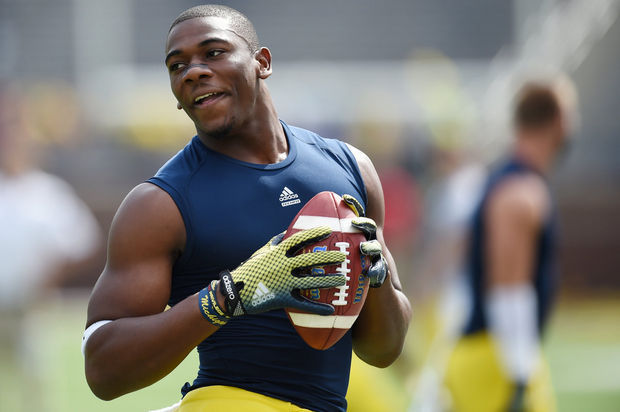 As the NFL Draft approaches on Thursday, Friday, and Saturday, we are bound to see a couple Michigan players’ names called. From 2009-2014, Michigan has been going back and forth between having two and three players drafted (LINK). If that trend continues, just two of these players will be selected. Linked to each player’s name is their senior profile, in which I detail some of their workout numbers and a projection.

Devin Funchess, WR: Funchess is the one guy who might sniff the first round, but it would take a leap of faith by a daring team. A wide receiver with a tight end body, he has never been a plus blocker despite being much taller and heavier than the corners and safeties he has faced. When Michigan actually played him at tight end during his freshman and sophomore seasons, he was downright terrible as a blocker. However, he is large and fairly fast and has a 38.5″ vertical. I would not advise a team to take him as a tight end because he doesn’t have the blocking chops, but he’s a guy who can be a mismatch problem for a team that likes to be creative and use multiple tight ends.
My wild guess: 2nd round (#44 overall) to the New Orleans Saints.
Other good fits: Denver Broncos, Houston Texans, New England Patriots

Hit the jump for a rundown of Michigan’s other draft-eligible players.

Jake Ryan, LB: Ryan is a guy who could play SAM linebacker in a 4-3, inside linebacker in a 3-4, or outside linebacker in a 3-4. Personally, I like him on the edge in a 3-4 system, where he can use his playmaking skills to keep contain, rush the passer, and make things happen. He does not have great measurables and doesn’t have a ton of experience on the inside, but if a team is willing to spend some time developing him, I think he could be one of those guys who develops into a starting-caliber inside linebacker, too. Ryan also holds some value as a guy who could be an asset on special teams.
My wild guess: 3rd round (#74 overall) to the New York Giants
Other good fits: Arizona Cardinals, Green Bay Packers, Houston Texans

Frank Clark, DE: I did not do a senior profile for Clark, whose domestic abuse issues got him kicked off the team late in his senior year. Clark is a big character risk, as he has had multiple run-ins with the law during his college career. As much as you hope guys overcome these issues, my view is that if it costs Clark a job, there is quite possibly someone more deserving who can take the hundreds of thousands of dollars (or millions of dollars) that he would potentially earn. He was a fairly consistent player during the second half of his junior season in 2013 and then most of 2014, but he was never consistently great and the production didn’t match up to the practice hype. I think he has probably maxed out his frame at a little over 270 lbs. and he’s only 6’2″, so he might be somewhat limited. A team might want to trim off a little weight and make him a 3-4 rush linebacker, or a 4-3 team could use him as a weakside end. I think his inconsistency and lack of elite athleticism will hinder him, if not his off-the-field issues.
My wild guess: 6th round (#205 overall) to the Indianapolis Colts
Other good fits: Cincinnati Bengals, Dallas Cowboys, Oakland Raiders

Devin Gardner, WR/QB: Gardner has resigned himself to the fact that he will almost surely have to play wide receiver if he wants to have an NFL career. At Michigan’s pro day in March, he measured in a little over 6’3″ and 218 lbs. He ran a 4.65 forty, did 15 reps on the 225 lb. bench press, showed off a 35.5″ vertical, broad jumped 9’9″, and ran the 20-yard shuttle in 4.42 seconds. Those numbers are solid but not amazing. Considering the fact that he is changing positions and does not have blazing speed, his options may be limited. However, there are other quarterbacks who have made the transition from quarterback to wide receiver in the NFL quite well – Josh Cribbs, Julian Edelman, Bert Emanuel, etc. Those guys generally seem to be smaller, quicker guys who can get open in the middle of the field, not big guys who can go against NFL corners – arguably the best athletes on the field – and win one-on-one battles. I think Gardner is going to struggle with the move to receiver, but he has size, leadership, toughness, and character on his side. I do not expect him to get drafted, but some team will pick him up as an undrafted free agent

Raymon Taylor, CB: Taylor ran a reported 4.42 forty at Michigan’s pro day, which is too fast to be believable. He’s probably more of a 4.55 or 4.6 guy. Measuring in at a hair under 5’10” and 182 lbs., he’s a little on the small side, too. Taylor made some highlight-reel plays in 2013, but he also got burned at times and did not create a ton of turnovers. He will almost surely not get drafted, so his best bet is to latch on as an undrafted free agent and hope he can make an NFL squad.

Brennen Beyer, DE: Beyer was not extremely productive at Michigan despite being a two-year starter, and he did not help himself out much during a pro day in which he ran a 4.87 forty (keep in mind that those times are typically faster than Combine times, so he’s probably more of a 5-flat guy) and did 20 reps on the bench press. At 6’4″ and 256 lbs., he already seemed to have hit his limit since he struggled to even maintain that weight. His size indicates an NFL outside linebacker, but he lacks the speed to play that position in the NFL and doesn’t offer much as a special teams player. He won’t get drafted, and even if he gets a shot as a free agent, I doubt he will stick with a team.

Will Hagerup, P: Hagerup had an up and down career as Michigan’s punter. At times he would look great, and at other times, he would look mediocre. Suspended frequently for off-the-field behavior, he averaged just 36.0 yards/punt as a sophomore in 2011 and had an uninspiring 42.9-yard average as a fifth year senior this past year. He’s another one who will not get drafted, but he might get invited to a camp. Punters are very transient in the NFL, and guys go from starting NFL punter to standing in the unemployment line on a weekly basis.

Delonte Hollowell, CB: I really only mention Hollowell here because he was the “star” of Michigan’s pro day with a reported 4.34 forty, a 37″ vertical, 20 reps on the bench press, and a 10’1″ broad jump. None of that will get him drafted, because he was ineffective on the field and never became a starter at Michigan. I doubt whether he’ll even get an invitation to a training camp. 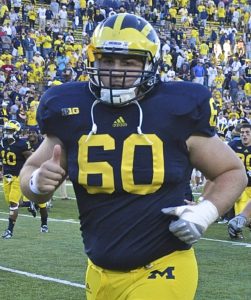 HIGH SCHOOL
Coming out of Toledo (OH) St. John’s, Miller was a Rivals 3-star and an unranked weakside defensive end. Yep. That’s how stupid the recruiting sites can be sometimes; they call future centers “weakside ends.” Anyway, Miller chose the Wolverines over offers from Illinois, Michigan State, Pitt, Stanford, West Virginia, and several others. He was one of the last players to commit to Rich Rodriguez (on December 10, 2010) before the coach was fired. Here’s my commitment post from ye olden days (LINK).

COLLEGE
Miller necessarily redshirted as a freshman in 2011 because he was very undersized at 263 lbs. He played sparingly as a backup in 2012. He got a chance to start in 2013, but he was quickly replaced after four games by then-redshirt sophomore guard Graham Glasgow, who had his own share of struggles. Not only was Miller getting pushed around, but he was also completely whiffing on assignments too often. By the beginning of the 2014 season, the redshirt junior had started to figure things out and earned the starting center nod for the Darrell Funk-coached offensive line, holding the job for the entire year. For his accomplishments, he was named the best offensive lineman on the team. The incumbent was expected to hold his position in 2015, but he decided after a few practices in spring ball to hang up his cleats.

SUMMARY
As you can tell if you look back at that commitment post, I was never a huge fan of Miller’s abilities. He played a little high, was undersized, and wasn’t a great athlete. However, it should at least be considered that he was a guy recruited by Rich Rodriguez to play in mostly a zone system, and then he had to play in a more pro-style offense under Brady Hoke. When Miller actually played, he was somewhere between 288-296 lbs., which isn’t tiny but isn’t huge, either. He was downright bad in 2013, but he was serviceable in 2014. In a year when three other guys held their jobs for the whole year, Miller was named the top lineman and cut down on the mistakes he made as a redshirt sophomore. Some fans held an indelible grudge against Miller for what happened in 2013, but he probably would have been the starter again in 2015 for what should be a solid offensive line. Now it looks like the center job will go to fifth year senior Graham Glasgow, who played guard last year, or redshirt sophomore Patrick Kugler.

I WILL REMEMBER HIM FOR . . .
. . . his friendly jowls. At no point in his career did he seem like a manly beast of an offensive lineman, but instead looked like an oversized 14-year-old. Maybe like the real-life version of Russell from Up.

PROJECTION
Miller says that he’s furthering his education and pursuing business interests, so it does not look like he’ll be working toward playing professional football of any sort. In any case, he was probably not bound for the NFL and might have been more of an Arena League-caliber guy.