ADDED TO THE BOARD: 2016
Waterford (MI) Mott wide receiver Desmond Fitzpatrick decommitted from Louisville. Fitzpatrick, who holds a Michigan offer and is a former teammate of linebacker commit David Reese, is expected to commit to Nebraska at this point. At one time he was considered likely to flip to Michigan, but the staff seemed to cool on him. He’s a 247 Composite 4-star, the #53 wide receiver, and #272 overall.

ADDED TO THE BOARD: 2017
Cincinnati (OH) St. Xavier offensive guard Matt Bockhorst was offered by Michigan. He’s a 6’4″, 290 lb. prospect with offers from Clemson, Michigan State, Ohio State, and Penn State, among others. He’s a 247 Composite 4-star, the #7 offensive guard, and #293 overall. He is thought to be pretty open at this point in his recruiting process. Bockhorst is a thickly built kid who will probably end up playing on the interior due to a lack of foot quickness.

Hit the jump for a few more 2017 prospects, a new 2018 offer, some guys who went off the board, some random bits, and the visitor list for the OSU game.

END_OF_DOCUMENT_TOKEN_TO_BE_REPLACED 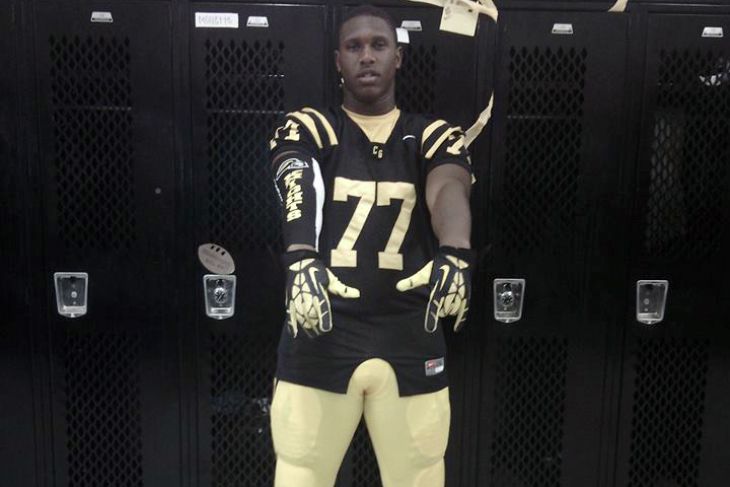 ADDED TO THE BOARD: 2016
Sioux Falls (SD) Washington offensive tackle Matt Farniok was offered by Michigan. He’s a 6’6″, 290 lb. prospect with offers from Florida, Florida State, Iowa, Nebraska, Oklahoma, Penn State, and Wisconsin, among others. He’s a 247 Composite 4-star, the #22 offensive tackle, and #210 overall. Farniok is a pretty athletic, high-effort kid who destroys the South Dakota competition, which is not known for being all that talented. Regardless, it’s easy to see why high-level teams are intrigued.

Lawrenceville (GA) Archer offensive tackle E.J. Price decommitted from Georgia. He’s a 6’6″, 311 lb. prospect who holds offers from Alabama, Auburn, Clemson, Florida, Florida State, Notre Dame, Ohio State, and USC, among others. He’s a 247 Composite 4-star, the #9 offensive tackle, and #54 overall. Price grew up on the west side of Michigan, and the Wolverines were expecting to at least get a visit from him before he surprised a lot of people by committing to Georgia. He does plan to visit family in Michigan this summer, and a stop in Ann Arbor could very well happen at that time. Price’s teammates include 2017 defensive backs Isaiah Pryor and Jamyest Williams, both of whom have Michigan offers.

Hit the jump for a couple new 2017 offers, some guys who committed elsewhere, and some random bits.

ADDED TO THE BOARD: 2017
Nashville (TN) Oakland wide receiver Jacoby Stevens was offered by Michigan. He’s a 6’2″, 200 lb. prospect with offers from Alabama, Auburn, Georgia, LSU, Notre Dame, Ohio State, and Tennessee, among others. He’s a 247 Sports 4-star, the #4 athlete, and #44 overall. Stevens could play anywhere from receiver to safety to linebacker at the next level.

New Orleans (LA) Brother Martin cornerback Tre Swilling was offered by Michigan. He’s a 6’0″, 180 lb. prospect whose other offer comes from LSU. His brother, Bruce Jordan-Swilling, was offered by the Wolverines a couple weeks ago, and they are the sons of former New Orleans Saints linebacker Pat Swilling.

ADDED TO THE BOARD: 2018
Paramus (NJ) Catholic quarterback Allan Walters was offered by Michigan. He’s a 6’2″, 200 lb. prospect with offers from Rutgers and Temple. Walters is a pro-style quarterback with a pretty strong arm and good mechanics for such a young player. He’s the second quarterback offered in the 2018 class, joining Floridian Joey Gatewood, who is expected to end up at Florida State. Walters is also the teammate of several offerees, including 2016 defensive tackle Rashan Gary, 2016 wide receiver Donald Stewart, 2017 defensive end Corey Bolds, and 2017 linebacker Drew Singleton. Their former coach is Michigan’s recruiting coordinator.

OFF THE BOARD
Brownsburg (IN) Brownsburg running back Toks Akinribade committed to Iowa. Michigan was recruiting Akinribade even after Chris Evans committed a couple weeks ago, but a crowded backfield may have scared him off. Or maybe he just liked Iowa better. Akinribade did take a spring visit to Michigan, and he’s a teammate of offered 2017 quarterback Hunter Johnson.

Carson (CA) Calabasas safety Marquel Dismuke committed to Nebraska. He was a recent decommit from Cal.

Downey (CA) Downey linebacker Darrian Franklin committed to Oregon. Franklin was initially excited about his Michigan offer, but he never visited. Michigan has also offered his teammate, Daevon Vigilant, who could play running back, wide receiver, cornerback, or returner.

Mililani (HI) Mililani running back Vavae Malepeai committed to Oregon. After the good vibes Marcus Mariota received from the fans and the school, Oregon probably earned a lot of favors in the state of Hawaii. Malepeai might not be a total burner, but he’s a sturdy running back with good vision. I think he’ll fit in well in Eugene.

West Hartford (CT) Kingswood-Oxford linebacker Koby Quansah committed to Duke. Previously, he had named Michigan to his top ten. Duke is pulling in quite a class, including three players (Gilbert, Quansah, and Virginia WR Scott Bracey) who had Michigan offers. They currently have the #16 class in the country using 247’s Composite rankings.

Green Bay (WI) Bay Port offensive tackle Cole Van Lanen committed to Wisconsin. According to the 247 Composite, Van Lanen is the #2 player in the state for 2016. Who’s #1? Ben Bredeson. Interestingly, the top four  players in Wisconsin are offensive tackles.

MISCELLANEOUS
Norfolk (FL) Lake Taylor cornerback Wayne Davis named Michigan to his top three. The other two schools are Ohio State and Virginia Tech, and he has not visited Michigan yet, although he plans to do so this summer.

Farmington Hills (MI) Harrison defensive end Khalid Kareem is announcing his college decision – for a second time – on Wednesday, June 24th. Over on 247 Sports, 88% of the Crystal Ball picks are in favor of Michigan. He has taken visits in the last week and a half to Alabama, Mississippi State, and South Carolina.

Allen (TX) Allen defensive end Levi Onwuzurike named Michigan to his top ten. He and Greg Mattison have developed a good relationship, although probably not quite good enough to reel him in.

Tons – literally, I guess – of football prospects showed up for Michigan’s Exposure U and Aerial Assault camps over the last week (LINK). At the link you’ll find lots of the bigger names to attend, along with brief info blurbs about most of them.

Several players took visits to Michigan this past weekend (LINK).

Lots of stuff is going on with in-state recruiting. I’ll have several new profiles up this week as a lot more 2017 prospects have started earning offers at summer camps. Over on Recruiting Season . . . :