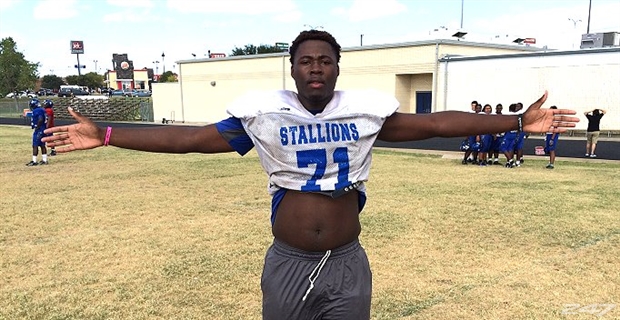 2016 RECRUITING: A NEW ERA
Michigan has now extended 198 offers in the 2016 class, which is the most offers the Wolverines have ever handed out during the Rivals/Scout era. The previous high was 195 in 2011 (LINK). It’s not a coincidence that both of those classes are right near transitions. The 2011 group was the combined Rodriguez/Hoke class, while 2016 will be Harbaugh’s first full year. Each time a new coach comes in, some previously extended offers are no longer valid; conversely, some new offers have to be given out to make up for lost time.

Regardless, it is only the beginning of May, and we are approximately nine months away from National Signing Day. The “record” number of offers will not simply be surpassed – it will be obliterated. Michigan fans have at times criticized Alabama, Ohio State, Tennessee, etc. for littering the countryside with offers, but the Wolverines are entering that category. I have never had a problem with that strategy, because without an offer, only the diehard-iest of diehard recruits will maintain interest (such as Grant Perry, who flipped from Northwestern to Michigan this past winter). An offer is a way to gauge interest. If the player says “thanks” and never does anything more about it, you’ve extended an offer but can concentrate your efforts on more interested parties.

There’s no wrong way to eat a Reese’s. Brady Hoke generally sent out fewer offers and wanted to develop strong relationships with individual players, and Hoke’s recruiting classes were ranked pretty high. I recently read an article about Mike Krzyzewski at Duke (a basketball coach, I know), who tries to only offer one guy at a time until the kid says no or commits elsewhere. Coach K talked about wanting to develop a level of trust with a player from the outset, not telling him he’s “their guy” one minute and saying the same thing to another guy at the same position with his next phone call. At the same time, the aforementioned football teams have brought in pretty good recruiting classes, too. Whether you like it or not, Harbaugh is going to be more Urban Meyer and Nick Saban.

Hit the jump for a bunch of new 2016 offers, a couple guys who committed elsewhere, and some random bits.

ADDED TO THE BOARD: 2016
Lakeland (FL) Lake Gibson defensive tackle Keyshon Camp was offered by Michigan. He’s a 6’3″, 269 lb. prospect with offers from Alabama, Florida, Miami, and USC, among others. He’s a 247 Composite 4-star, the #20 defensive tackle, and #209 overall. As a junior in 2014, he made 71 tackles, 19 tackles for loss, and 5 sacks. Camp stands up a little too high for my liking, but he has good athleticism. Camp attends the alma mater of incoming freshman defensive end Reuben Jones, and one of his coaches is former Michigan offensive guard Ricky Barnum. He is likely headed for Miami to join their class, which already has 20 commits (plus another six already committed for 2017).

Mesquite (TX) North Mesquite offensive tackle Jean Delance was offered by Michigan. He’s a 6’5″, 281 lb. prospect who was committed to Oklahoma until early March, when he decommitted in the wake of the Sooners’ racist fraternity chant scandal. Delance is a 247 Composite 4-star, the #13 offensive tackle, and #96 overall. Aside from Oklahoma, he also has offers from Alabama, LSU, TCU, Texas A&M, and USC, among others. Delance is a long-limbed athlete who probably projects to left tackle in college, where he has the agility and length to take on blindside pass rushers.

Navasota (TX) Navasota wide receiver Tren’Davian Dickson was offered by Michigan. He’s a 6’0″, 171 lb. prospect with offers from Alabama, Oklahoma, Texas, Texas A&M, and USC, among others; he was previously committed to Baylor. Dickson is a 247 Composite 4-star, the #18 wide receiver, and #114 overall. As a junior in 2014, he had some ridiculous statistics: 90 catches for 2,166 yards and 39 touchdowns. Before you get too excited about those numbers, Navasota is not a large community and the entire school district includes fewer than 3,000 students, so he is not playing against elite competition. Indeed, Dickson shows a nice feel for route running and finding the ball, but he does not have elite athleticism. He is already committed to play in the U.S. Army All-American Bowl.

Honolulu (HI) Kaiser offensive guard Michael Eletise was offered by Michigan. He’s a 6’4″, 313 lb. prospect with offers from Arizona, Arizona State, Florida State, Hawaii, Oklahoma, UCLA, and Washington, among others. He’s a 247 Composite 4-star, the #6 offensive guard, and #189 overall. Eletise is a big, solid body who has decent athleticism, but he tends to come up too high and stop his feet at times. He plays left tackle for his high school team, but will most likely be a guard at the next level. He is the second Hawaiian Michigan has offered in the 2016 class, joining running back Vavae Malepeai.

Deltona (FL) Deltona defensive end Evan Hinson, a Miami commit, was offered by Michigan. He’s a 6’5″, 215 lb. prospect who also has offers from Florida, South Florida, and others. He committed to the Hurricanes in February. Hinson is a 247 Composite 3-star, the #26 tight end, and #580 overall. As a junior in 2014, he made 25 tackles, 15 tackles for loss, and 5 sacks; he also caught 12 passes for 223 yards and 2 touchdowns on offense. Hinson is a pretty raw athlete on both offense and defense, but he looks like a more natural fit on the defensive side of the ball. He also has a younger brother, Blake, who was offered by the Wolverines (more on him tomorrow).

Chesapeake (VA) Grassfield wide receiver Grant Holloway was offered by Michigan. He’s a 6’2″, 180 lb. prospect with offers from Clemson, Tennessee, Virginia, and Virginia Tech, among others. He’s a 247 Composite 3-star, the #132 wide receiver, and #892 overall. He claims a 4.26 forty. Holloway is a long-striding speedster who could be a deep threat in college, and his track background shows on the football field. His early leader is Virginia Tech.

Madison (GA) Morgan County wide receiver Jailyn Ingram was offered by Michigan. He’s a 6’5″, 210 lb. prospect with offers from Florida State, Georgia Tech, Mississippi State, and North Carolina State. He’s unranked by the recruiting services and claims a 4.43 forty. Ingram is a big body who takes a bit to get to full speed, but he has good top-end speed and can be tough to bring down because of his size. I’m surprised he has not received more recruiting attention, but with Florida State and Michigan offering, the recruiting services will likely get around to evaluating him soon.

Boulder (CO) Fairview defensive end Carlo Kemp was offered by Michigan. He’s a 6’3″, 265 lb. prospect with offers from Arizona State, Colorado, Colorado State, and Washington, among others. He’s a 247 Composite 4-star, the #17 strongside end, and #279 overall. As a junior in 2014, he made 66 tackles, 20 tackles for loss, and 8 sacks; he also had a very nice interception return for a touchdown reminiscent of Frank Clark’s interception against Virginia Tech in the 2011 Sugar Bowl. Kemp plays all over the place for Fairview – kickoff coverage, inside linebacker, outside linebacker, defensive end, fullback – and despite being very versatile, the competition level in Colorado is somewhat questionable and he seems a little ponderous to play in space. He will probably be a defensive end in the future and might even grown into a 3-tech tackle. Kemp seems to want to stay on the west coast. His coach is Tom McCartney, the son of former Colorado head coach (and Michigan assistant) Bill McCartney.

Arlington (VA) Bishop O’Connell offensive guard Jay Jay McCargo, a North Carolina commit, was offered by Michigan. He’s a 6’4″, 290 lb. prospect who also holds offers from Alabama, Auburn, Clemson, Miami, South Carolina, Virginia, and Virginia Tech, among others. He’s a 247 Composite 3-star, the #32 offensive tackle, and #315 overall. McCargo has good feet and might have the athleticism to play tackle at the next level, but he may be a little on the short side. He has kind of a comical tendency to look directly at the guy he’s going to block pre-snap, so that’s one area that needs to be fixed as soon as possible. McCargo committed to UNC on April 25, just a few days before the Michigan offer came through.

Scottsdale (AZ) Saguaro cornerback Byron Murphy was offered by Michigan. He’s a 5’11”, 160 lb. prospect with offers from Arizona, Arizona State, Florida State, Notre Dame, Oklahoma, Texas A&M, and Wisconsin, among others. He’s a 247 Composite 4-star, the #9 cornerback, and #122 overall. As a junior in 2014, he caught 65 passes for 1,348 yards, he made 6 interceptions, and he scored 16 total touchdowns. Murphy has good hips and is a physical corner, although he is not blazing fast. Murphy’s former teammate, elite wide receiver Christian Kirk, enrolled early at Texas A&M this past January.

Shreveport (LA) Calvary Baptist safety Chanse Sylvie was offered by Michigan. He’s a 6’0″, 185 lb. prospect with offers from Arizona, Arizona State, Baylor, Miami, Mississippi State, Nebraska, Oklahoma, and Tennessee, among others. He’s a 247 Composite 3-star, the #37 safety, and #581 overall. As a junior in 2014, he made 122 tackles, 6 tackles for loss, 1 interception, 9 pass breakups, 4 forced fumbles, and 4 fumble recoveries. I really like Sylvie’s game because of how quickly he reads and reacts, and he has some pretty good athleticism, too. His teammate is 5-star quarterback Shea Patterson, a Michigan target who is committed to Ole Miss. Calvary Baptist has a corner committed to Oklahoma State and another corner with big-time SEC offers, so the program is loaded.

Mineola (TX) Mineola offensive guard Riley Anderson committed to Texas A&M, too. They’re twins. On National Signing Day, I really hope one of them waits until the other sends in the fax to TAMU and then the first one flips to another school. I would give the trickster an ice cream cone if he pulled that off. Because then he would be ruled ineligible for taking improper benefits, which would serve him right for being a dick to his twin brother.

Over the past week on Recruiting Season, I updated profiles for some guys who picked up some pretty big offers: