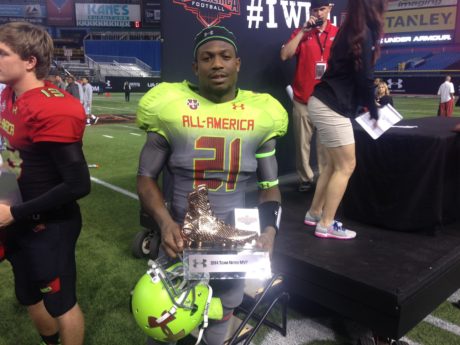 ADDED TO THE BOARD: 2014
Minneapolis (MN) Washburn running back Jeff Jones was offered by Michigan. Jones is a 6’0″, 196 lb. prospect who “committed” to Minnesota in March 2013, but he has been looking around almost the entire time and took an official visit to Iowa State a few weeks ago. He also holds offers from Florida, Michigan State, Missouri, and Wisconsin. Jones has set an official visit to Florida, and he’s also tentatively planning to visit Ann Arbor and East Lansing. He’s a 247 Composite 4-star, the #9 running back, and the #111 player overall. In the Under Armour All-American Game on Friday, he led Team Nitro with 43 yards rushing, adding 4 catches for 35 yards and 1 touchdown. Against admittedly weak competition in Minneapolis as a senior, he had 167 carries for 1,525 yards and 34 touchdowns, plus 17 catches for 493 yards and 8 touchdowns. He isn’t the biggest or the fastest back around, but he has a good combination of quick feet, surprising power, and good vision. I’ve been thinking Michigan should offer Jones for a while, and although it’s late in the process, the Wolverines have a chance. I don’t think Jones will end up signing with Minnesota, but I don’t have a solid guess on what his final choice will be, either.

ADDED TO THE BOARD: 2015
Scottsdale (AZ) Saguaro wide receiver Christian Kirk was offered by Michigan. He also has offers from Arizona, Arizona State, Florida State, Notre Dame, Ohio State, Oklahoma, USC, and numerous others. Kirk is a 5’10”, 180 lb. prospect who is a pretty polished player, along with being very fast and athletic. I have yet to see a better wide receiver in the 2015 class, and that includes former Michigan commit George Campbell. As a sophomore in 2012, he had 43 receptions for 1,003 yards and 12 touchdowns. According to 247’s Composite ranking, he’s a 5-star, the #1 wide receiver, and the #32 player overall.


OFF THE BOARD
Lewisville (TX) Hebron safety Jamal Adams committed to LSU at the Under Armour All-America Game. Actually, he committed to “the University of LSU,” which caused a big uproar on Twitter and message boards. Personally, I think it’s silly when people flip out about the language high school football players use when announcing where they’re going to play football.

New Orleans (LA) St. Augustine running back Leonard Fournette committed to LSU during the Under Armour All-America Game. Fournette is generally considered to be the top running back in the 2014 class, if not the best overall player. He flirted with Michigan a little bit and even scheduled a visit at one time, but he and his family famously never got on the plane, which caused Michigan’s portion of the internet to break.

Cleveland (OH) Glenville defensive backs Marshon Lattimore and Erick Smith committed to Ohio State during the U.S. Army All-American Bowl. Some smoke came out on Friday that they might be committing to Michigan, far-fetched as that was. Both have long been considered to be OSU locks, but it was thought that the Buckeyes might not have room for both of them. Smith in particular looked good in the all-star game when he led the East team with 6 tackles. However, he announced first and let the cat out of the bag that Lattimore would be joining him in Columbus, which took some of the wind out Lattimore’s commitment sails.

Oakley (CA) Freedom running back Joe Mixon committed to Oklahoma as the climactic announcement of the U.S. Army All-American Bowl. Mixon was also considering Wisconsin, which could have been bad news for the rest of the Big Ten.

Crete (IL) Crete-Monee linebacker Nyles Morgan committed to Notre Dame. After Crete-Monee products Anthony Standifer and Laquon Treadwell stiffed Michigan in the past couple classes, I barely paid attention to Morgan throughout the process. I do think it would have been oddly interesting to have Michigan’s current middle linebacker take a breather only to be replaced by this guy.

Olathe (KS) North outside linebacker Jimmie Swain IV committed to Oregon. Swain had been committed to TCU at one point, but he opened up his recruitment only to become a silent commit to the Ducks several weeks ago.

Washington (DC) Friendship cornerback Jalen Tabor committed to Arizona during the Under Armour All-America Game. In a surprise move, Tabor picked the Wildcats over Alabama and Maryland. He’s a 247 Composite 5-star, the #4 cornerback, and the #24 player overall. Arizona head coach Rich Rodriguez has had problems with 5-star defensive backs in the past (Demar Dorsey, Justin Turner), so for his sake, hopefully Tabor at least plays a down or two of football.

Gardena (CA) Junipero Serra linebacker Dwight Williams committed to UCLA during the U.S. Army All-American Bowl. Serra is a powerhouse school, and Williams was considering a visit to Michigan at one point, but it never came through. He was #1 on my wish list for a weakside linebacker in the 2014 class, and I think he’ll have a good career for the Bruins. His teammate, highly touted cornerback Adoree’ Jackson, tweeted out a top six the other day that did not include Michigan, just in case you were still holding out hope that the Wolverines could pull off a miracle.

MISCELLANEOUS
Here are my thoughts on the play of Michigan’s commits in the Under Armour game.

With only Tarpon Springs (FL) East Lake’s Mason Cole playing in the Army game, I didn’t write up a separate post. Cole started at left guard and played some right tackle in the game, although I read in several places that he looks like a guard through and through for the next level. Cole looked somewhat undersized out there, and I imagine he’s somewhere around 275-280 lbs. right now. I did see him have trouble with the huge defensive tackles on the West roster, such as Bijhon Jackson, who’s listed at 6’2″, 327. But overall, he showed nice footwork, good knee bend, and decent strength, and Rivals named him the #6 overall performer on the East team.

In case you’re wondering, here’s a link to the relevant roster players for each of the weekend’s notable All-America games:

Daejuan Funderburk – S – Washington (DC) Friendship Collegiate: Funderburke is a 6’1″, 180 lb. prospect with offers from Florida State, Miami, Rutgers, Tennessee, West Virginia, and Wisconsin, among others.  He claims a 4.5 forty and according to the 247 Composite ranking, he’s a 3-star, the #43 safety, and the #546 player overall.  He shows decent speed and change of direction, and he could play corner or free safety in college.

Dimitri Lee – CB – Washington (DC) Friendship Collegiate: Lee is a 5’9″, 185 lb. prospect with no offers at this time.  Lee is a little stiff in the hips and is a thick kid, so he might be more of a strong safety or slot corner at the next level.


Jimmy Martin – LB – Maitland (FL) Orangewood Christian: Martin is a 5’11”, 203 lb. prospect for the class of 2015 with no offers at this time.  He also visited Michigan for a game back in September 2012.  He claims a 4.62 forty and as a sophomore in 2012, he had 113 tackles, 4 sacks, 2 interceptions, 3 forced fumbles, and 2 fumble recoveries.  He also had 604 rushing yards, 121 receiving yards, and 8 total touchdowns.  Martin plays small school competition, so his numbers should be taken with a grain of salt; he would likely project to middle linebacker or perhaps fullback at the next level.

Chigozie Onyekwere – WR – Washington (DC) Friendship Collegiate: Onyekwere is a 5’11”, 190 lb. prospect with a lone offer from North Carolina State.  He’s a 3-star prospect with a 4.5 forty whom 247’s Composite ranking places as a 3-star and the #154 wideout.


Jalen Tabor – CB – Washington (DC) Friendship Collegiate: Tabor is a 6’1″, 182 lb. prospect with offers from Alabama, Florida, Florida State, LSU, Miami, Michigan, Ohio State, Virginia Tech, and numerous others.  As a junior in 2012, he had 27 tackles, 8 interceptions, and 1 interception returned for a touchdown.  The 247 Composite ranking places him as a 5-star, the #4 cornerback, and the #16 player overall.  This will be Tabor’s first visit to Michigan’s campus, and the Wolverines appear to be playing from well behind on this one.  Teammate D’Andre Payne, who has a Michigan offer, committed to Tennessee; other Friendship products have been offered by Michigan in recent years, including linebacker Yannick Ngakoue (Maryland) and defensive tackle Eddie Goldman (Florida State).  Tabor is expect to follow Goldman to Tallahassee.

Maurice Ways – WR – Detroit (MI) Country Day: Ways is a 6’3″, 195 lb. prospect who earned a Michigan offer late last week.  He just earned an offer from Pitt, which joined Iowa, Kansas, and several others.  As a junior in 2012, Ways had 51 receptions for 957 yards and 9 touchdowns.  Many people are expecting Ways to commit to Michigan soon, if not on his visit.

Rivals put together a U.S. Army All-Combine Team, and here are some defenders of note:

Anyway, here are some notes on some of the top 25 guys:

1. Da’Shawn Hand – DE – Virginia: Hand already has a Michigan offer, but most expect him to be SEC-bound.

2. Andrew Brown – DT – Virginia: I’ve heard some not-so-flattering things about Brown’s attitude, but he’s a beast of a player.  He also seems to be SEC-bound.

13. Damian Prince – OT – Maryland: Prince was offered by Michigan a couple months ago.  He will probably give Michigan a look, but I’m not too confident on most players from the East Coast.

17. Bentley Spain – OT – North Carolina: Spain was offered by Michigan a few weeks ago.  I’m kind of expecting him to go to South Carolina, though.

20. Jalen Tabor – CB – Washington, D.C.: He has an offer from Michigan, but seems to be leaning toward Tennessee right now.

23. Malik McDowell – DE – Michigan: McDowell already has an offer from Michigan and could very well end up committing to the Wolverines at any point.