During Rogers’ time at Michigan, he switched back and forth between offense and defense, learned a lot of different playbooks and schemes, and got to know quite a few coaches. Now, after earning his Michigan degree, James is playing for the KC Command, talking about his ambitions, and reflecting on many of the questions offered by TTB readers.
Recent happenings: “I was substitute teaching back in my home town of Madison Heights, and I also coached football. I was actually going to take the middle school basketball coaching job and track coaching job, too, but I ended up coming down here to play arena football for Kansas City, so I’m going to do that for right now. But I’ll probably look into coaching in the future. . . . [Arena football] is a little bit different than the outside game. It’s a lot faster pace, a lot shorter field, and it kind of has a disadvantage for the cornerbacks because the wide receivers get to run up to the line of scrimmage, and go in motion. But I’m enjoying it so far, though. All my teammates are pretty cool; I’m having a good time down here.”
Favorite Michigan Memory: “I had two picks that Purdue game my senior year; that felt good on an individual level. . . . In 2007, my freshman year, we started off slow but ended up picking our season up and went down there to the Capital One bowl and beat Tim Tebow in the bowl game that year. So that was a great memory about the whole of Michigan football. I think that’s one thing I’ll never forget.”
Switching between offense and defense at Michigan: “It kind of helped me out; it was kind of difficult, too, though. . . I had to learn several play books. And when I was there, we went through two coaching changes and then went through another coaching change at defensive coordinator. There were a lot of different playbooks that I had to learn. I began to study every night; football was like a class in itself. . . . When Rich Rod got there, he asked me to come to the offensive side of the ball, and then at the end of my junior year, Coach Robinson came to me and asked me if I’d mind coming back over and playing [on defense], and I was like, ‘yeah, sure, no problem.’ . . . I just said to myself that I have to put all those young kids on my back and help lead that whole defensive backfield.”
Watching the 2011 Wolverines: “It was definitely tough to sit through those years where Michigan was at its down point because Michigan’s one of those schools that’s always on top. But what I can say about us and those seniors the two years before me is just that we were never going to give up. We stuck in there and we fought. We knew the main point was, yeah, we’re there to play football, but let’s make sure we get this education while we’re at it. For some of those players like me who stuck around and went through those bad seasons, it was still good enough for us to know that we finished college and got our degrees from one of the most prestigious colleges in the world. But yeah, it would have been great to have been on that Sugar Bowl team. But I’m still happy for those guys; those are our boys, and I feel like we helped prepare them to do that.”
Differences between the two coaching staffs: “I’m not going to lie; it was definitely different from Coach Carr to Coach Rod’s staff. We had just got real close to Coach Carr’s staff, so it’s kind of like when you lose someone really important in your life. . . . We were so comfortable with Coach Carr. It was almost like losing a parent or something. That’s how we felt when Coach Carr had left. . . . Coach Carr and the whole staff, I really enjoyed his whole staff.”
NCAA investigation, Free Press allegations: “The part that hurt the most was it being brought to the media. It kind of made us seem like we were criminals, almost. The University of Michigan is a very big deal, so with people just looking at us like that, it kind of did give us kind of a negative view on the team. We kind of felt like, yeah we’re working extra hard, but we didn’t feel like we were doing anything too out of the ordinary that a lot of other schools weren’t doing. It’s something I think that also made us have that little setback, but as a team I think we stuck together, and I think we overcame it.”
John U. Bacon’s Three and Out: “I have not read the book. . .I couldn’t tell you anything about it.”
WR or CB? “I think any football player would love to be on the offensive side of the ball. How many young kids at a young age are like, “I want to be a D-lineman or a cornerback?’ Everyone wants to be wide receiver, quarterback, or running back . . . but at Michigan and knowing about Charles Woodson, I was happy to play cornerback, too, though. I’m happy I played cornerback, and if I had to do it again, I’d certainly play cornerback.”
Uncategorized 11 comments admin 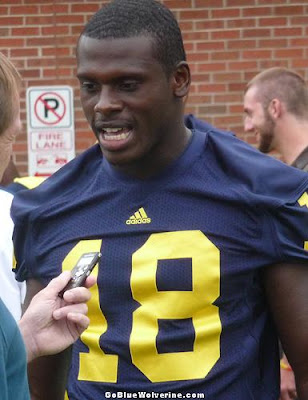 While at Michigan, James Rogers switched back and forth between the offensive and defensive sides of the ball, acclimated himself to a new head coach and two new defensive coordinators, and ended his career as a starting cornerback. His is one of the more interesting journeys for a Michigan player in recent memory. I’ll be talking with James later in the week, so if you have a question for him, leave it below and I’ll try to address it in the interview.

The NFL Draft has always been a fun time for me, because I would always sit around and wait for the next Michigan player’s name to get called.  Between watching for a Michigan player to get drafted and waiting for the Lions to pick, one Saturday in April was perhaps the most exciting day of the football off-season.  But Michigan’s production of NFL players has waned in recent years.

Ever since six players were taken in the 2008 draft – four in the first three rounds – the Wolverines have only been able to muster five total draft picks in 2009 (4th round: Terrance Taylor; 6th: Morgan Trent) and 2010 (1st: Brandon Graham; 5th: Zoltan Mesko; 7th: Steve Brown).  That’s an average draft position of the 4.6th round.

By contrast, 60 players were taken from 1995-2007, an average of 4.62 per year.  On average, those players were drafted in the 3.68th round.  Not only has the number of Michigan draftees been lower in the past couple seasons, but they’re getting picked lower, too.

That average draft position might rise slightly this year, but there will probably only be two Wolverines chosen this coming weekend:


Jonas Mouton – Linebacker
Mouton measured in at the NFL Combine at 6’1″ and 239 lbs.  I think he could play a couple positions, either as a weak inside linebacker in a 3-4 or as a weakside outside linebacker in a 4-3.  He’s pretty solid in coverage and changes direction well (video here, senior profile here).
Projection: 5th round to the Patriots


Steve Schilling – Offensive guard
Schilling measured in at the NFL Combine at 6’5″, 304 lbs.  He had a pretty good Combine performance, but nothing stellar.  He played a lot of offensive tackle at Michigan, but I think he’s strictly a guard at the next level.  Four years of starting experience should help him (senior profile here).
Projection: 4th round to the Browns


I do think there is a remote chance that two other players get drafted late – Obi Ezeh and Martell Webb.  Ezeh was, for all intents and purposes, a four-year starter at middle linebacker.  That might be worth something to a team late in the draft.  And Webb turned into a very good blocker.  If a team is looking for a cheap blocking tight end in the 7th round, they could do worse than picking a 6’4″, 268-pounder with decent athleticism.

HIGH SCHOOL
Coming out of high school in 2007 from Madison Heights, MI, Rogers was a mid-level recruit.  He was a 3-star player, the #68 athlete, and the #27 player in Michigan, according to Rivals.  Scout said he was a 4-star and the #17 safety in the country.  I guess Rivals made the better evaluation here, since Rogers bounced back and forth between cornerback and wide receiver all four years.  At no point did he play safety.

COLLEGE
Rogers was a pretty dynamic offensive player in high school, so many assumed he would be a receiver.  But he first appeared as a cornerback and special teamer, burning his redshirt for a small slice of playing time as a freshman in 2007.  He ended the season with 6 tackles, 1 pass breakup, and 1 fumble recovery.  When Rodriguez showed up and needed an influx of receivers for 2008, Rogers moved to that side of the ball.  He started two games, making 3 receptions for 64 yards in addition to 2 special teams tackles.  Rogers stayed at receiver into 2009, but when attrition took its toll on the cornerback position, he found himself back on defense and special teams, making 7 total tackles.  A shortage of defensive backs continued and injuries mounted, which left Rogers on defense.  So in a somewhat surprising turn of events, the high school running back/wide receiver-turned-cornerback-turned-receiver-turned-cornerback became a 13-game starter as a senior.  He made 40 tackles, 3 interceptions (tied for the team lead), 3 pass breakups, and 2 tackles for loss throughout the year.

SUMMARY
Rogers is a pretty good story.  He’s the type of kid who stuck around for four years and never complained, even when it looked like he would never see the field.  If it weren’t for the injury to Troy Woolfolk in the preseason, Rogers probably wouldn’t have played much this past year, except for spot duty and special teams.  But he persevered and ended up as a 13-game starter.  I always wished Rogers could stay at wide receiver and stop bouncing around, because I thought he had the speed and hands to be a decent wideout.  But obviously he was needed at cornerback this past season, and he made an impact on that side of the ball.

PROJECTION
Rogers was not invited to the NFL Combine but will likely work out at U of M’s upcoming pro day.  He has excellent speed (witness his rundown of a Mississippi State running back in the Gator Bowl), but he’s not very smooth in the hips, he’s somewhat slow at diagnosing routes, and he’s not a great tackler.  I would be very surprised if he plays football at the next level.