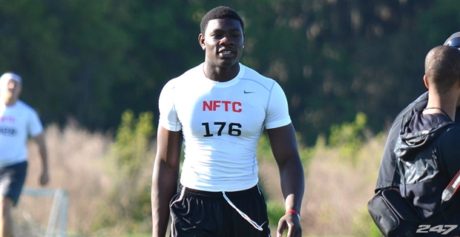 STATE OF 2015 RECRUITING CLASS
QB: Michigan is set with Alex Malzone.
RB: Michigan is set with Mike Weber, although he’s one to keep an eye on because of some questionable loyalty comments. The Wolverines also have Ty Isaac redshirt, who will be a redshirt sophomore in 2015.
TE: Michigan is fine with Chris Clark in the mix, but he’s another guy with questionable loyalty issues.
WR: Michigan should be fine with Brian Cole, since the Wolverines have several receivers redshirting from the 2014 class.
OL: I would like to see the Wolverines add one more player to the mix, along with Grant Newsome and Jon Runyan, Jr.
DE: Michigan needs a weakside end in this class, but they should be set with strongside end Darian Roseboro. The most likely option is Keisean Lucier-South, who has several suitors (UCLA, Oklahoma, etc.). If he is no longer an option, Michigan will probably need to expand its offer board.
DT: Michigan does not need a true defensive tackle in this class, and Roseboro might fill that need in the long run, anyway.
LB: Michigan is stacked at linebacker, and Darrin Kirkland, Jr. adds depth at middle linebacker. Only elite options should be considered, and not many seem to have interest in Michigan at this point.
CB: Michigan is solid at cornerback with Garrett Taylor (though he tore his ACL) and the crew already on the roster, but Marcus Lewis remains a somewhat likely option.
S: Michigan has some good young players at safety, and Tyree Kinnel is having a solid senior year. The Wolverines could use a difference maker here, but otherwise, their numbers are solid.
K/P: Michigan’s kicker (Matt Wile) and punter (Will Hagerup) are both graduating, but the punting job will almost surely be taken over by walk-on Kenny Allen. Meanwhile, Andrew David should take Wile’s spot.

Summary: Michigan is set at most positions with a need at weakside end. Offensive line and cornerback are not needs but desires, and the tight end/running back positions are question marks because the two players committed at those spots are somewhat soft in their pledges.

ADDED TO THE BOARD: 2015
Cedar Hill (TX) Cedar Hill wide receiver Damarkus Lodge decommitted from Texas A&M. Michigan has no chance here. Interestingly, in the aftermath of the decommitment, Aggies head coach Kevin Sumlin talked about how they rotate receivers and publicly said “If you’re scared, you don’t need to play here.” It doesn’t sound like that fence will be mended anytime soon.

OFF THE BOARD
Panama City (FL) Bay defensive end Janarius Robinson committed to Florida State. You can’t really blame him after they win a national championship and then beat a pretty good Clemson team with their backup quarterback. Of course, it helps that you can go there, allegedly sexually assault women, allegedly shoplift crab legs, and still win a Heisman trophy with a staff that reluctantly suspends you – finally – for a game only because the national media crushes the staff. Not that young Mr. Robinson would ever be interested in doing those things, but . . . you know . . . those protections in place don’t hurt.

MISCELLANEOUS
Over on Recruiting Season – which has taken a bit of a back seat with football season in full swing – I updated the profiles of Wes French, Demetric Vance, and Donnie Corley. Corley, in particular, is one that Michigan fans should watch going forward. He’s a 2016 wide receiver prospect with very good skills, although he’s probably headed to MSU.

Here’s a list of visitors from the game against Utah (LINK).

The following prospects have been noted by me as visitors to Michigan for the week. It’s not completely clear whether some of them will compete at Michigan’s summer camp this week or not. I would expect most of the ones with Michigan offers to just be visiting, but those without offers (such as Holyfield and Malone-Hatcher) seem to still be trying to make a name for themselves and will probably be participating in the workouts.

2015
Asmar Bilal – LB – Indianapolis (IN) Ben Davis: Bilal is a 6’3″, 205 lb. prospect with offers from Michigan and Notre Dame (and lots of others, but those two are the ones that really matter). He’s a 247 Composite 4-star, the #7 inside linebacker, and #225 overall. As a junior in 2013, he made 106 tackles, 4.5 sacks, and 1 fumble recovery. Bilal visited Michigan earlier this spring with Darrin Kirkland, Jr. – who has since committed to the Wolverines – but the presumption is that the Fighting Irish lead.


Chris Clark – TE – Avon (CT) Old Farms: Clark is a 6’6″, 247 lb. prospect with offers from Alabama, Arizona State, Auburn, Florida State, Michigan, Michigan State, Notre Dame, Ohio State, and tons of others. He’s a 247 Composite 4-star, the #2 tight end, and #100 overall. As a junior in 2013, he caught 39 passes for 417 yards and 6 touchdowns. Clark recently performed well in the Rivals 100 Five-Star Challenge and impressed people with his receiving skills, although he suffered a minor injury. He plans to announce his final college decision during Nike’s The Opening in early July, but he was previously committed to North Carolina, so any commitment at that time should be taken with a grain of salt. He thoroughly enjoyed a spring visit to Michigan and said the Wolverines led at the time, and the thought is that Michigan still leads. Whether they can hold onto that lead into July (or into National Signing Day) is another issue, but for now, things look good.

Shane Lemieux – OT – Yakima (WA) West Valley: Lemieux is a 6’6″, 285 lb. prospect with an offer from Michigan but who committed to Oregon in May. He had originally planned to visit Michigan during this time, but that was prior to his verbal commitment. I assume he is not visiting now, but I’ll leave his name on here since I haven’t heard confirmation either way. He’s a 247 Composite 3-star and the #31 offensive guard.

2016
Elijah Holyfield – RB – Atlanta (GA) Woodward Academy: Holyfield is a 5’11”, 190 lb. prospect with offers from Kentucky, Minnesota, Mississippi State, Ohio State, Tennessee, and Wisconsin. As a freshman in 2012, he carried the ball 66 times for 645 yards and 10 touchdowns. He claims a 4.55 forty, but on film, his speed is not particularly impressive. He is the son of former heavyweight boxer Evander Holyfield.

Matt Heuerman – TE – Naples (FL) Barron Collier: Heuerman is a 6’6″, 200 lb. prospect with no FBS offers at this time. He’s the brother of Jeff Heuerman (Ohio State), whom Michigan offered a few years ago, but their father played basketball for the Wolverines. He attends the same high school as incoming freshman defensive tackle Brady Pallante.


Janarius Robinson – DE – Panama City (FL) Bay: Robinson is a 6’5″, 230 lb. prospect with offers from Clemson, Florida State, Michigan, South Carolina, and Tennessee, among others. He’s a 247 Sports 4-star, the #5 weakside end, and #65 overall. Robinson has openly stated that his favorite team is Florida State, and that’s his likely destination, but he did make almost immediate plans to visit Ann Arbor after receiving his offer from the Wolverines, so they will have a chance to sway him.

Clark Yarbrough – OT – Woodberry Forest (VA) Woodberry Forest: Yarbrough is a 6’5″, 255 lb. prospect with offers from Florida, Maryland, Tennessee, and Virginia Tech, among others. He’s a 247 Composite 4-star, the #16 offensive tackle, and #158 overall. His sophomore year in 2013 was his first year playing organized football.

2017
Corey Malone-Hatcher – DE – St. Joseph (MI) St. Joseph: Malone-Hatcher is a 6’3″, 205 lb. prospect with no offers currently, but he will likely be one of the top few prospects in the state of Michigan for his class. He came away raving from a spring visit to Alabama, so that may be an obstacle if they extend an offer. It’s still very early for 2017 prospects, though.

ADDED TO THE BOARD: 2016
Rancho Santa Margarita (CA) Santa Margarita Catholic quarterback K.J. Costello was offered by Michigan. He’s a 6’4″, 213 lb. prospect with offers from Cal, Florida State, Miami, Tennessee, and Virginia. 247 Sports ranks him as a 4-star, the #5 pro-style quarterback, and #139 overall in his class. Costello has a bit of a hitch in his throwing motion that slows down his release, but otherwise, he’s got a strong arm with good accuracy. Michigan has now offered four quarterbacks in the 2016 class (two more are listed below, plus Dwayne Haskins, Jr. received his two weeks ago), and Costello seems the most enthusiastic about Michigan.

Lake Stevens (WA) Lake Stevens quarterback Jacob Eason was offered by Michigan. He’s a 6’5″, 205 lb. prospect with offers from Alabama, Florida, Florida State, Georgia, Miami, Notre Dame, Oklahoma State, Oregon State, and Tennessee, among others. He’s a 247 Sports 5-star, the #1 pro-style quarterback, and #5 overall. As a sophomore in 2013, he completed 209/350 passes for 2,941 yards, 23 touchdowns, and 8 interceptions. Eason is a tall, lanky kid with a very strong arm, good accuracy, and a high football IQ. Eason’s father is Tony Eason (not that Tony Eason), a former wide receiver for the Fighting Irish.

Thousand Oaks (CA) Westlake quarterback Malik Henry was offered by Michigan. He’s a 6’3″, 180 lb. prospect with offers from Florida State, Nebraska, Notre Dame, UCLA, USC, and Wisconsin, among others. He’s a 247 Sports 4-star, the #1 dual-threat quarterback, and #13 overall. Henry has a strong arm, and while he’s listed as a dual-threat guy, he seems like one of those guys who likes to throw first but can move the chains well with his feet. Somewhat like a Devin Gardner, he can make plays from the pocket but his feet are an added bonus.

Panama City (FL) Bay defensive end Janarius Robinson was offered by Michigan. He’s a 6’5″, 230 lb. prospect with a 4.62 forty. He has offers from Clemson, Florida State, and Tennessee, among others. He’s a 247 Sports 4-star, the #5 weakside end, and #65 overall. The front-runner appears to be Florida State, but Robinson is planning a trip to Ann Arbor for later in June.

Reisterstown (MD) Franklin wide receiver Steven Smothers was offered by Michigan. He’s a 5’9″, 152 lb. prospect with a 4.39 forty. He has offers from Alabama, Florida State, Georgia, Ohio State, Penn State, Rutgers, Tennessee, Virginia, Virginia Tech, and West Virginia, among others. He’s a 247 Sports 4-star, the #9 wide receiver, and #62 overall. In a recent interview with MGoBlog, Smothers claimed to be from another planet and said he’s the most dominant player in the 2016 class, so confidence is not lacking in this one. His teammate is 2015 offensive guard prospect Patrick Allen, who also holds a Michigan offer.

OFF THE BOARD
Merrillville (IN) Andrean linebacker Josh Barajas flipped from Penn State to Notre Dame. Penn State had some significant recruiting momentum, and this is a bit of a blow to what is still a very good recruiting class for the Nittany Lions. New coaches often bring at least a short wave of hype, so we’ll see how long at lasts with James Franklin.

Jefferson City (MO) Helias tight end Hale Hentges committed to Alabama. Hentges had visited Michigan, but he has always been at least the third-most likely player at his position to commit to Michigan (behind Chris Clark and Tyrone Wheatley, Jr.), so this isn’t a big blow.

MISCELLANEOUS
Here’s a list of various kinds of lists: