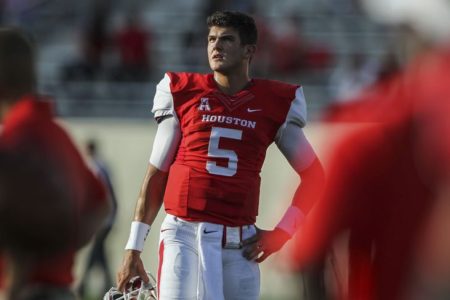 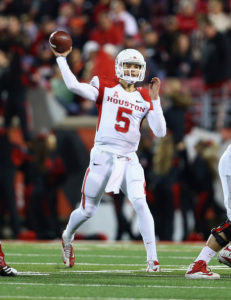 Thanks to Paul and Michael for the recent donations! If others would like to donate to the redesign effort, you can use Paypal (on the left sidebar) or do some shopping on Amazon (LINK). The goal is for $3,000 total.
—————-

Houston quarterback John O’Korn is transferring to Michigan. You already know this if you are a Michigan football blogosphere fanatic, but I didn’t want to write a commitment post until things were more concrete. So here we are.

O’Korn is a 6’4″, 220-pounder who attended Fort Lauderdale (FL) St. Thomas Aquinas before committing to Houston; he also had offers from Arkansas, Louisville, Mississippi State, and North Carolina, among others. Coincidentally, he played at the same school as incoming graduate transfer Jake Rudock. O’Korn started for Houston as a freshman after the starter got knocked out with concussions; O’Korn was named American Athletic Conference Rookie of the Year for his performance. He then lost his starting job in the middle of his sophomore year and is now headed to Ann Arbor.

Hit the jump for more on O’Korn and his future at Michigan.

O’Korn is a good-sized quarterback who fits the physical mold of a pro-style quarterback. While Houston is more of a spread team, O’Korn was in a pro-style offense as a high schooler, so dropping back from under center, ball handling, etc. should not be major adjustments. He has a strong enough arm for college football, although not a cannon; he should be able to make all the throws necessary for Harbaugh’s offense. He shows some very nice touch on his throws and won’t try to laser in passes to wide open receivers. As a runner, he’s a strong kid who can shake off some tacklers. He’s not afraid to lower his shoulder if necessary – or sometimes even if it’s unnecessary – and he has enough athleticism to move the chains if defenses don’t respect his ability to scramble.

On the negative side, O’Korn has a bit of a three-quarters delivery that might see some of his passes get batted down. He also tends to fall off to his left side when throwing left, which can cause the ball to sail high and generally be inaccurate. Mechanically, he made significant strides from high school to Houston, but he still showed some issues with footwork. His biggest issue as a sophomore was that he seemed to be staring down his receivers, allowing defenders to converge on his intended target.

One thing to consider regarding O’Korn’s decline was the offensive coordinator change between his freshman and sophomore years. Doug Meacham was transplanted from high-octane Oklahoma State to passing game coordinator at Houston in 2013, and O’Korn enjoyed a great deal of success under him. After that season Meacham was hired away by Gary Patterson at TCU, where Meacham’s offense turned Trevone Boykin from mediocre (7 touchdowns, 7 interceptions) into a potential Heisman candidate (33 touchdowns, 10 interceptions, 707 yards rushing). Meanwhile, replacement coordinator Travis Bush was not retained by new Houston head coach Tom Herman and, as far as I can tell, has not found a new job yet.

Overall, I think Michigan did a good job of bringing in O’Korn, who has a similar skill set to what Harbaugh brought in at Stanford. As an athlete he compares favorably to all but Shane Morris and Zach Gentry of Michigan’s other quarterbacks, but O’Korn is a better decision maker than Morris and more experienced than both. He will have to sit out the 2015 season due to NCAA transfer rules, and he will be a redshirt junior in 2016. Unless Morris or an underclassman wins the job this year and plays well, I would guess that O’Korn would be the opening day starter going into 2016.

As of right now, there are six quarterbacks scheduled to be on the roster in 2016: Shane Morris (Sr.), O’Korn (RS Jr.), Wilton Speight (RS So.), Zach Gentry (So.), Alex Malzone (So.), and Brandon Peters (Fr.). Michigan is already technically over the limit for scholarships in 2015, so there will have to be some attrition – or some walk-on scholarships yanked – before this season begins. Either way, the quarterback cabinet is pretty full and it would be pretty surprising if Michigan went after another high school quarterback in the 2016 class besides Peters.