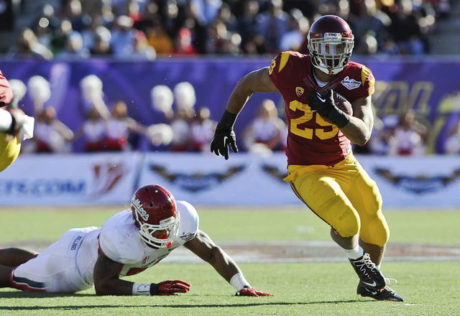 USC transfer running back Ty Isaac has announced his intentions to take his talents to Washtenaw County. His mother has an illness that does not allow her to fly from their home in Joliet, Illinois, so the roughly four-hour drive to Ann Arbor is easier on her. He was also considering Illinois and Notre Dame with other teams like Northwestern, Northern Illinois, and Ohio State also showing interest.

I wrote a scouting report on Isaac when he was in high school and considering Michigan (LINK).

Isaac was a backup for the Trojans last year, but they had a stacked backfield. He would have been a bit player once again this season, but he enters a Michigan backfield that is waiting for one of many players to emerge at the position. The two front-runners for the position had been sophomores De’Veon Smith and Derrick Green, both of whom were also in the 2013 class with Isaac. Isaac automatically enters that conversation as long as the NCAA waiver comes through that will allow him to play immediately, based upon his mother’s illness.

The depth chart will sort itself out. The best player(s) will play, but I have a hard time imagining all three players finishing out their careers at Michigan. Assuming that Isaac’s waiver is granted and he is eligible to play in 2014, I would not think that redshirting him would be a great idea. If he’s not immediately the best runner, he offers some value as a pass receiver out of the backfield and perhaps in an H-back type of role.

I won’t assign a TTB Rating to Isaac because it’s a little unfair, given that we’ve already seen him playing against FBS-level competition. However, I did say during the recruiting process that I would have ranked him above Green (and Smith), so I probably would have rated him somewhere in the 90’s.

Michigan will probably continue recruiting running backs for the 2015 class because they did not address the position in the 2014 class. It’s less dire of a need, but going two consecutive years without a running back (even if you got three in 2013) is not a good long-term strategy. By seniority, here’s the running back stable as it stands right now:

The last player to come from Joliet (IL) Catholic to Michigan was Mike Kolodziej, an injury-addled offensive lineman in the 2002 class.