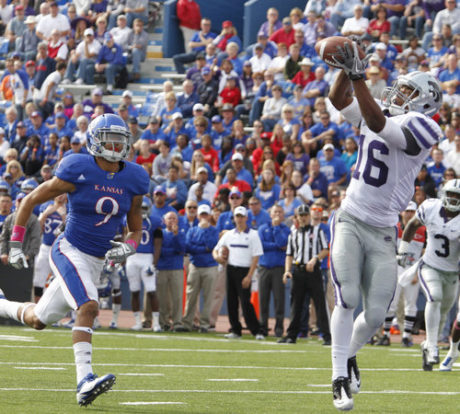 MICHIGAN
Starters: The diminutive fifth year senior Jeremy Gallon (5’8″, 184 lbs.) is the go-to guy, and he had an all-conference season with 80 catches, 1284 yards, and 9 touchdowns. He can be effective on just about any route – screens, hitches, square ins, fades, double moves, jump balls, etc. Aside from his lack of height (which he makes up for with his leaping ability and the timing of those leaps), he doesn’t have truly blazing speed, so he sometimes pulls away before getting tracked down in a foot race. The other starting wide receiver is sophomore Devin Funchess (6’5″, 235 lbs.), who made all-conference listed as a tight end but rarely plays it anymore; he has 47 catches for 727 yards and 6 scores. Funchess is Michigan’s bubble screen guy, leaps over tacklers sometimes, runs an occasional end around, and can beat teams deep. The de facto starting tight end is freshman Jake Butt (6’6″, 246 lbs.), who has come on late in the season to catch 17 balls for 203 yards and 2 touchdowns. Butt can do a little bit of everything between blocking, catching, and running.
Backups: Redshirt freshman Jehu Chesson (6’3″, 196 lbs.) started a little bit early in the year before Funchess’s blocking became too big of a problem at tight end, and while Chesson’s playing time has dropped a little bit, he’s actually improved his route running and ability to adjust to the ball in the air. He has 13 catches for 213 yards and 1 touchdown. Senior Drew Dileo (5’10”, 180 lbs.) is the only other significant receiving threat, but he’s a possession guy who usually works over the middle. Occasionally, senior Jeremy Jackson (6’3″, 209 lbs.) or redshirt senior Joe Reynolds (6’1″, 196 lbs.) will pop up for a catch, but they’ve totaled just 10 catches for 140 yards and 0 scores this year. Sophomore A.J. Williams (6’6″, 265 lbs.) and redshirt junior Jordan Paskorz (6’3″, 255 lbs.) are the “blocking” tight ends that struggle to block, and while they’ll be on the field a fair amount, they have just 1 total catch.

KANSAS STATE
Starters: The clear leader of the receiving corps is junior Tyler Lockett (5’11”, 175 lbs.), who has 71 catches for 1,146 yards and 8 touchdowns on the season. Lockett has made a lot of big catches for the Wildcats and can be a real threat to the secondary on deep routes. Fifth year senior Tramaine Thompson (5’8″, 167 lbs.) is also a big-play guy from the slot with 28 catches for 495 yards (17.7 yards/catch) and 5 touchdowns. Junior Curry Sexton (5’11”, 183 lbs.) is the other receiver in K-State’s three-wide attack, and he’s been more of a possession guy with 36 catches for 409 yards. Redshirt junior tight end Zach Trujillo is rarely targeted, but he has 5 catches for 111 yards and 1 touchdown.
Backups: Senior Torell Miller (6’3″, 213 lbs.) is a former safety who was expected to start this year in place of Sexton, but he’s been relegated to backup duty and 11 catches, 106 yards, and 1 touchdown. Redshirt sophomore Kyle Klein (6’4″, 210 lbs.) is a former defensive end who has 5 catches for 59 yards on the season. Fifth year senior Andre McDonald (6’8″, 278 lbs.) is a mammoth blocking tight end who has just 2 catches for 19 yards this season. It’s a very thin group of receivers.

THE TAKEAWAY
Michigan has two guys who can be consistent deep threats, and another who has the speed to do so. Gallon has been outstanding this year and was one of the top couple receivers in the conference, while Funchess is simply a matchup nightmare. The other guys aren’t very scary, but Chesson, Dileo, and Butt can all be good secondary targets and move the chains. Meanwhile, Kansas State has a guy who can blow up in the form of Lockett, plus a somewhat dangerous slot guy in Thompson. In a couple closely contested shootouts against Big 12 opponents, Lockett has gone over 230 yards (237 against Texas, 278 against Oklahoma), and he’s the guy that quarterbacks Jake Waters and Daniel Sams will look to if things get rough. If the Wildcats can move the ball consistently on the ground, they’ll settle for trying to win the game without putting the ball in the air too much. Tight ends have hurt Michigan in a few games this year (Minnesota’s Maxx Williams, Iowa’s C.J. Fiedorowicz, Ohio State’s Jeff Heuerman), but that shouldn’t be a persistent problem in this game. It’s a tall task to stop Lockett, but he’s the key to their passing game. 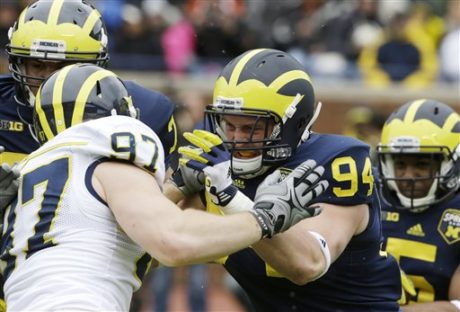 I swear on Bo Schembechler’s grave that this is just a coincidence, but this is the third consecutive year I have ranked Paskorz at #75. Weird, eh? Anyway, Paskorz was recruited as an outside linebacker, but moved to tight end in spring of 2012. There he remains. After not sniffing the field for his first two years on campus, he finally got some special teams action against UMass last year . . . only to be relegated to the bench for the rest of the season.

After seeing Paskorz in spring games for the past couple years, I think it’s fairly safe to say that he’s just not a Michigan-caliber athlete. The Wolverines are low on tight ends with size now that Mike Kwiatkowski graduated, so Paskorz could earn a role as a third tight end in short yardage or possibly an injury replacement if A.J. Williams gets hurt. However, he’s probably not a long-term solution at the position, and I would not be surprised if he departs after the 2013 season.

Paskorz has spent two seasons in Ann Arbor, and he has yet to see the field.  Originally recruited by Rich Rodriguez as a hybrid defensive end/outside linebacker, Paskorz practiced as a SAM linebacker last season but couldn’t crack the depth chart, getting outplayed by a trio of inexperienced linebackers in Jake Ryan, Cam Gordon, and Brennen Beyer.

For the upcoming season, Paskorz moved to tight end during the spring.  The graduation of Kevin Koger and Steve Watson, along with the early departure of freshman Chris Barnett, left a gaping hole at the tight end position.  Senior Brandon Moore is expected to start at tight end, but a couple incoming freshmen will try to contribute, too.  In the limited snaps we saw of Paskorz during the spring, he looked somewhat uncoordinated and overmatched by other athletes on the team.  I would be surprised to see Paskorz make anything more than a minimal contribution.

Here are my summative thoughts on these things:

Beyer has always looked to me more like a defensive end than an outside linebacker.  When I found out last fall that he and Frank Clark (who had flipped from outside linebacker to defensive end) had exchanged positions, it seemed strange to me that Beyer would move away from the defensive line.  Although the SAM linebacker in this defense is mostly a pass rusher, he still has some coverage responsibilities.  Beyer has always reminded me of Craig Roh, and while Roh was fairly lithe as a 235-240 lb. freshman, he’s lost some of that agility with added weight.  I’m not suggesting that Beyer will eventually be a strongside end, too, but he seemed out of place at linebacker.  And despite the fact that he ascended to Jake Ryan’s primary backup at SAM, that was at least partly because Cam Gordon suffered through a back injury for much of the season.

Beyer will be fighting with sophomore Frank Clark for the starting weakside end position.  Clark ended the 2011 season on a high note with some stellar play in the Sugar Bowl.  That end position has, of course, been vacated by Roh.  When he was younger, I assumed that Roh would settle in around 255 lbs. or so and remain at weakside end.  However, the coaches wanted him up around 270 lbs. this past season, and he just can’t maintain his old speed at that weight.  With the graduation of Ryan Van Bergen, the strongside end position needed an influx of talent (and I have yet to join the Nathan Brink bandwagon).  Roh will be the likely starter at SDE with guys like redshirt freshman Keith Heitzman and redshirt sophomore Brink battling there, too.

As for the move of Black to 3-tech defensive tackle, I will say that I’ve been slightly underwhelmed by his play so far.  He should have been redshirted as a freshman in 2010 so he could add bulk, but unfortunately he was needed immediately.  Now he’s entering his junior year when he should be just a redshirt sophomore.  Black made a couple solid plays (most notably against Ohio State) from the weakside end position, but he’s a liability in open space.  The SDE and 3-tech positions are somewhat interchangeable, and since Roh will presumably be starting at SDE, then it makes sense that the shorter, more powerfully built Black will likely be settling in at 3-tech.  Not only does this make room for Clark, Beyer, and freshmen to contribute at weakside end, but it also provides competition at defensive tackle, where Michigan is somewhat undermanned.

The move of Paskorz to tight end is probably the least controversial of the changes.  Paskorz played tight end in high school, and he was buried on the depth chart at outside linebacker.  Steve Watson proved to us that mediocre athletes can get on the field as a second or third tight end and make an impact, so there’s a very good chance that he’ll see the field in the fall.  Will he ever be a starter quality tight end?  My guess is no, but at least he provides depth.

Overall, I think these moves will serve the team well.  And with Michigan’s lack of depth and experience along the defensive line, several of these moves are almost out of necessity.  This is simply the natural evolution of a college football team.

Paskorz was an OLB/DE tweener coming out of high school, and he remains somewhat in positional limbo.  In the 2011 spring game, he still looked pretty skinny and was largely invisible at outside linebacker.  I still maintain that he’s probably too stiff to be a linebacker, so it’s hard to see where he fits.  Meanwhile, a couple guys seem to be ahead of him on the depth chart, including classmate Jake Ryan.

I don’t expect Paskorz to contribute much in 2011, either.  There has been virtually no practice buzz surrounding him, and he appears to lack the explosiveness required for linebacker.  His best opportunity for playing time probably comes on the punt unit or the kick return team.