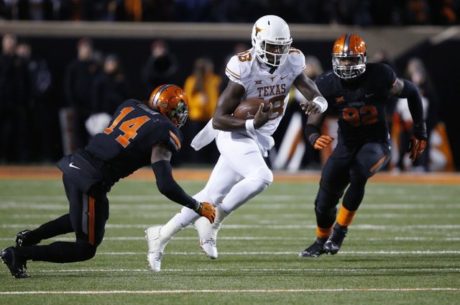 Former linebackers coach Jay Hopson: Hopson, now the head coach at Alcorn State, moved to 9-2 on the season with a 56-6 victory over Arkansas-Pine Bluff.

Former head coach Rich Rodriguez: Rodriguez’s Arizona Wildcats beat Washington by a score of 27-26. The Huskies were ahead 26-24 with three seconds remaining when Arizona kicker Casey Skowron missed a potential game-winning field goal, but Washington head coach Chris Petersen had called a timeout to ice the kicker. Skowron hit the field goal on his second try and Arizona pulled out the win. Arizona is now 8-2 on the year. 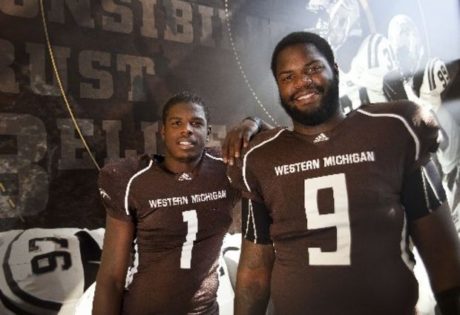 Former DT Richard Ash: Ash had 2 tackles, 1 tackle for loss, and 1 sack in Western Michigan’s 41-10 win over Miami-OH. He now has 29 tackles, 6.5 tackles for loss, 2.5 sacks, 1 pass breakup, and 1 blocked kick on the season. While looking for a picture to post (which is above), I came across this somewhat enlightening story about Ash’s childhood in Florida (LINK).

Former TE commit Pharaoh Brown: The Oregon Ducks usually struggle with Stanford, but not this time. The Ducks beat the Cardinal by a score of 45-14. Brown had 2 catches for 36 yards.

Former LB Josh Furman: After a promising 5-1 start to the season, Oklahoma State has lost three in a row. This week they got blown out by Kansas State by a score of 48-14. Furman had 2 tackles in the loss.

Former head coach Rich Rodriguez: Arizona scored a touchdown a couple minutes into the game, and then their offense completely sputtered. They lost to UCLA by a score of 17-7. Wildcats quarterback Anu Solomono completed just 18/48 passes for 175 yards, 1 touchdown, and 1 pick, and they were held to 80 rushing yards on 31 carries.

Former recruits WR Laquon Treadwell (Ole Miss) and LB Kris Frost (Auburn): Neither one was ever committed to Michigan, but both were really, really close. At the end of Saturday’s game, Treadwell caught a screen pass and nearly scored a touchdown before Frost tackled him from behind, falling on Treadwell’s leg and breaking it in the process. Meanwhile, Treadwell understandably fumbled the ball just inches from the goal line, so while the play was initially ruled as a potential game-winning touchdown, replay determined that it was a fumble recovered by Auburn. The Tigers won by a score of 35-31. WARNING: Don’t watch the video if you’re squeamish about seeing broken extremities.

Former S Ray Vinopal: Pitt lost a shootout in double-overtime to Duke by a score of 51-48. Vinopal had 7 tackles in the loss. Pitt piled up 358 rushing yards, including 263 from James Conner – who had ZERO negative-yardage plays. 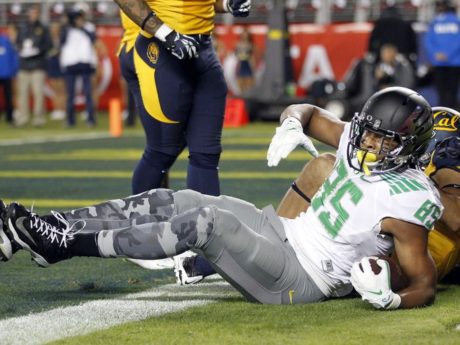 Former RB commit Demetrius Hart: Hart had 13 carries for 87 yards and 1 catch for 21 yards in Colorado State’s 45-31 victory over Wyoming.

Former linebackers coach Jay Hopson: Hopson and his Alcorn State Braves improved to 7-2 on the season with a 77-48 win over Prairie View A&M. Alcorn State gained 699 total yards (337 rushing, 362 passing) in a balanced attack, but they also gave up 545.

Former head coach Rich Rodriguez: Rodriguez and his Arizona Wildcats beat Washington State by a score of 59-37. Arizona was outgained (543 to 491) in total yardage, but they returned a punt 81 yards for a touchdown and also returned a late WSU onside kick for a touchdown. Meanwhile, quarterback Anu Solomon threw for 294 yards, 5 touchdowns, and 0 interceptions.

Former S Ray Vinopal: Vinopal had 7 tackles and 1 tackle for loss, but Pitt lost to Georgia Tech by a score of 56-28. Five players for Georgia Tech had more than 50 yards rushing, and the Yellowjackets averaged 7.3 yards/carry.

Former TE commit Pharaoh Brown: Brown had 3 receptions for a career-high 99 yards in Oregon’s 45-20 victory over Washington. He has 18 catches for 314 yards (17.4 yards/catch) and 3 touchdowns on the season.

Former S Josh Furman: Oklahoma State suffered a crushing defeat at the hands of TCU, 42-9. Furman made 5 tackles and 1 tackle for loss in the defeat. He now has 39 tackles, 9 tackles for loss, 5 sacks, 1 interception, 3 pass breakups, and 1 forced fumble.

Former linebackers coach Jay Hopson: Hopson, now the head coach at Alcorn State, went to 6-2 with a 40-25 win over Texas Southern. The two losses came against Southern Mississippi in week two and Grambling State on October 11th. Hopson is 19-12 as a head coach in two-plus seasons.

Former RB Thomas Rawls: Rawls nearly continued his streak of 200+ yard rushing games, but alas, he ended this week’s contest with 37 carries for 181 yards (4.9 yards/carry) and 1 touchdown. He also caught 1 pass for 6 yards, but Central Michigan lost to Ball State by a score of 32-29. Rawls passed the 1,000-yard barrier for the season and now has 1,007 yards and 10 rushing touchdowns. 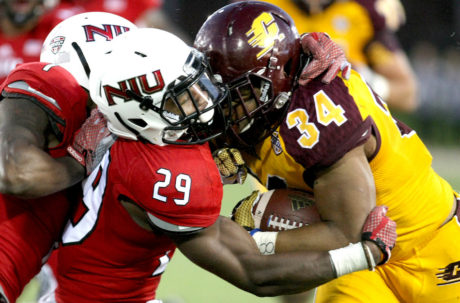 Former TE commit Pharaoh Brown: Brown caught 5 passes for 84 yards and 1 touchdown in Oregon’s 42-30 victory over UCLA. That’s a season high in receptions and yards, and it’s his third touchdown reception of the season.

Former RB Thomas Rawls: Rawls had a second straight 200-yard game on Saturday when Central Michigan beat Northern Illinois by a score of 34-17. Rawls carried the ball 40 times for 275 yards (6.75 yards/carry) and 2 touchdowns. On the season he has 153 carries for 842 yards (5.5 yards/carry) and 9 touchdowns.

Former head coach Rich Rodriguez: Arizona ascended to #10 in the rankings before getting knocked off by USC by a score of 28-26 on Saturday night. The team managed just 77 yards on 29 carries, so Rodriguez resorted to calling 72 passes. Quarterback Anu Solomon was 43/72 for 395 yards, 1 touchdown, and 0 interceptions. Kicker Casey Skowron was just 2/5 on field goals. Arizona is now 5-1.