Trevon Avery – CB – Grand Blanc (MI) Grand Blanc: Avery is a 5’9″, 160 lb. prospect for 2015 with no offers at this time. He’s the younger brother of senior defensive back Courtney Avery.

Desmond Fitzpatrick – WR – Farmington (MI) Farmington: Fitzpatrick is a 5’11”, 165 lb. prospect for 2016 with offers from Indiana, Ohio, and Toledo. He transferred to Farmington from crosstown Harrison this offseason.

KeShawn Gilmore – S – Detroit (MI) Cass Tech: Gilmore is a 6’2″, 190 lb. prospect for 2015 with no offers at this time. He may take over this fall for former Technician Delano Hill, a current freshman at Michigan.

Drake Harris – WR – Grand Rapids (MI) Christian: Harris committed to Michigan in April. He injured his hamstring in a scrimmage last week and will be out for 4-6 weeks.

Jalen Martin – WR – Harper Woods (MI) Chandler Park: Martin is a 6’3″, 190 lb. prospect for 2016 with a lone offer from Eastern Michigan. He’s the former teammate of freshman wide receiver Csont’e York. Martin had 5 receiving touchdowns as a freshman in 2012.

Malik McDowell – DE – Southfield (MI) Southfield: McDowell is a 6’6″, 292 lb. prospect with offers from Alabama, Florida, Florida State, Michigan, Notre Dame, Ohio State, Oregon, Penn State, USC, and a bunch of others. He attended the BBQ at the Big House in late July, and word around that time was that he got close to committing to the Wolverines. McDowell transferred to Southfield this summer and will be teammates with Marshall.

David Reese – DE – Farmington (MI) Farmington: Reese is a 6’1″, 235 lb. prospect for 2016 with no offers at this time. He could play inside linebacker, but might grow into a defensive end in the next few years.

Nathan Skene – TE – Hartland (MI) Hartland: Skene is a 6’3″, 190 lb. prospect for 2016 with no offers at this time. He’s the son of former Michigan offensive lineman Doug Skene.

Tyriq Thompson – LB – Detroit (MI) King: Thompson is a 6’0″, 206 lb. prospect for 2015 with offers from Illinois and Wisconsin. He’s the son of former Michigan defensive back Clarence Thompson.

Michael Weber – RB – Detroit (MI) Cass Tech: Weber is a 5’10”, 205 lb. prospect for 2015 with offers from Michigan, Michigan State, Ohio State, and Tennessee, among others. He was considered to be Michigan lean until fellow 2015 running back Damien Harris committed to the Wolverines, which may not leave enough room in the class for Weber. 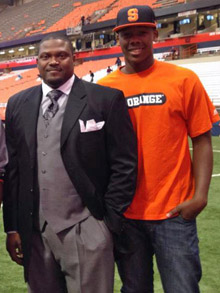 I posted the list of top 100 players for Scout the other day, and now they’ve released their top 300. Here’s a look at the rest of that list, particularly players of note for Michigan fans; all players have been offered unless otherwise noted.

*Player has visited or camped at Michigan.
**Player has not visited or been offered, but comes from Michigan’s heavy recruiting area.

Joshua Alabi – DT – Detroit (MI) Cass Tech: Alabi is a 6’4″, 245 lb. defensive tackle prospect from the class of 2015.  He has offers from Michigan and Michigan State and has visited Michigan numerous times.

Alex Bars – OT – Nashville (TN) Montgomery Bell: Bars is a 6’6″, 287 lb. prospect with offers from Florida, Florida State, Georgia, Michigan, Notre Dame, Ohio State, Penn State, and Stanford, among others.  He has an older brother at Penn State and an older brother at Michigan (offensive guard Blake).  The younger Bars is a 4-star prospect to ESPN, Rivals, and Scout.

Jayru Campbell – QB – Detroit (MI) Cass Tech: Campbell is a 6’3″, 190 lb. prospect for 2015 with offers from Alabama and Notre Dame, among others.  He has led Cass Tech to state championships during both his freshman and sophomore seasons.

Orlando Carter – OT – Detroit (MI) Cass Tech: Carter is yet another Cass Tech product, in this case a 2015 lineman who’s already near 300 lbs.

Keith Jones – LB – Detroit (MI) Cass Tech: Jones is a 6’1″, 235 lb. prospect from the 2015 class.  He has no offers at this time.  He’s classmates with Joshua Alabi and Michael Weber, both of whom have Michigan offers.

Tyree Kinnel – S – Huber Heights (OH) Wayne: Kinnel is a 6’1″, 190 lb. safety with no offers at this time.  He’s a 2015 prospect who has visited Michigan multiple times, including last fall and earlier this month.  He once again visited campus on Tuesday, and he seems to be expecting an offer sooner or later.  Kinnel claims a 4.5 forty time.

Lawrence Marshall – DE – Southfield (MI) Southfield: Marshall is a 6’3″, 225 lb. prospect with offers from Michigan, Michigan State, Ohio State, and Oklahoma, among others.  He was recently rated the #12 weakside end and the #206 overall prospect by 247 Sports, although Rivals initially ranks him as a 3-star. UPDATE: Marshall was unable to make it to campus.

Chance Sorrell – TE – Middletown (OH) Middletown: Sorrell is a 6’6″, 250-pounder with offers from Bowling Green, Indiana, Kent State, and Ohio.  He has visited Michigan several times, but he’s more of a blocking TE prospect and may be a ways down the pecking order for a Michigan offer.

Tyriq Thompson – S – Detroit (MI) King: Thompson is a 6’1″, 220 lb. prospect who’s a part of the 2015 class.  As a sophomore that size, he will likely grow into a linebacker before all is said and done.  He’s also the son of former Michigan defensive back Clarence Thompson, who was All-Big Ten in 1995.  The younger Thompson transferred from Missouri after his sophomore season.

I will be adding to this list if any players trickle in throughout the week.  Some high schoolers are on their spring break, so they can make midweek visits before Easter.

Joshua Alabi – DT – Detroit (MI) Cass Tech: Alabi, a 2015 prospect, is a 6’5″, 245-pounder with offers from Michigan and Michigan State.  Cass Tech has also sent numerous players to Michigan in recent years, including 2013 prospects David Dawson, Delano Hill, and Jourdan Lewis. UPDATE: Alabi did not end up making the trip.

Jayru Campbell – QB – Detroit (MI) Cass Tech: Campbell, a 2015 prospect, is a 6’3″, 190 lb. quarterback with offers from Alabama, Michigan State, and Notre Dame.  As a sophomore in 2012, he had 2,000 passing yards, 32 touchdowns, and 6 interceptions.  He led the Technicians to state championships in his freshman and sophomore seasons.

Keith Jones – DE – Detroit (MI) Cass Tech: Jones is a 6’0″, 240 lb. defensive end with no offers at this time.  He claims a 4.74 forty time and a 315 lb. bench press, both of which are impressive numbers for someone his age.  He’s somewhat short for an FBS defensive end prospect, but he still has a couple years to grow.

Parrker Westphal – CB – Bolingbrook (IL) Bolingbrook: Westphal is a 6’0″, 186 lb. prospect with offers from Florida, Illinois, Nebraska, Notre Dame, and Ohio State, among others.  As a junior in 2012, he had 51 tackles, 4 tackles for loss, 3 interceptions, 4 forced fumbles, and 1 fumble recovery. He’s a thick-bodied corner who is being recruited as a boundary corner and potentially a slot corner, but I think he also has the size to potentially play either safety position.  While he doesn’t have great speed, he’s fast enough to be a quality player at the next level.  Westphal has maintained throughout most of the recruiting process that Michigan is his leader, so it would not surprise me if he commits at any time.  His high school coach Todd Howard had 151 tackles, 8 interceptions, and 33 pass breakups as a cornerback for Michigan from 1998-2001.

Several class of 2013 signees are visiting campus, including Derrick Green.

ADDED TO THE BOARD: 2013
Louisville (KY) Trinity defensive end Jason Hatcher decommitted from USC.  Hatcher is not considering Michigan, but he is now open to Louisville (where his teammate James Quick is committed) or Kentucky, the new head coaching home of former Florida State defensive coordinator Mark Stoops.

ADDED TO THE BOARD: 2014
Cleveland (OH) Glenville safety Erick Smith was offered by Michigan.  Smith is a 6’1″, 185 lb. prospect with offers from Georgia Tech, Louisville, Ohio State, and West Virginia, among others.  Michigan has also offered his teammate, wide receiver Marshon Lattimore.  Like a lot of Glenville products, Ohio State seems to be the leader.

ADDED TO THE BOARD: 2015
Detroit (MI) Cass Tech defensive tackle Joshua Alabi was offered by Michigan.  The 6’5″, 245-pounder doesn’t hold any other offers.  He doesn’t get off the ball very well defensively, but the athleticism is apparent.  He moves like a future left tackle, but I’m not sure he’ll have the height and length to play that position; if he can get more aggressive, he’s the type of athlete you would want at strongside end or 3-tech defensive tackle.  Alabi has visited Michigan a couple times, including for last season’s Michigan State game.  He played defensive end, defensive tackle, and offensive tackle for Cass Tech, and is the teammate of 2013 commits David Dawson, Delano Hill, and Jourdan Lewis.

Detroit (MI) Cass Tech running back Mikey Weber was offered by Michigan.  The 5’10”, 195 lb. running back also has offers from Illinois and Syracuse.  As a sophomore in 2012, he had 1,700 yards rushing and 21 touchdowns.  Weber’s body type looks a lot like Fitzgerald Toussaint’s, but Weber’s more of a slasher and doesn’t show the same kind of lateral movement.


OFF THE BOARD
Phoenix (AZ) Brophy Prep wide receiver Devon Allen committed to Oregon.  Allen flirted with lots of teams out west, and even seriously considered Michigan and Notre Dame for a while.  But he always coveted an Oregon offer, which came recently, and the choice seemed to be pretty easy at that point.

Avon (IN) Avon defensive end Elijah Daniel committed to Ole Miss.  Daniel had previously been committed to Clemson along with the consensus #1 defensive end nationally, Robert Nkemdiche.  Now that Nkemdiche appears to be headed for Oxford sooner or later, Daniel seems destined to be a Rebel, too.

Belton (TX) Belton tight end Durham Smythe committed to Notre Dame.  Smythe had previously been committed to Texas, but since he decommitted, it has mostly been a race between the Fighting Irish and Stanford.  He was originally scheduled to take a visit to Michigan this past weekend, but he rescheduled in order to visit South Bend with a bunch of other visitors.  Now it looks like next weekend’s visit to Ann Arbor won’t happen after all.

Tempe (AZ) Marcos De Niza cornerback Priest Willis committed to UCLA.  Michigan was never strongly in the running.  The Wolverines were recruiting him as a cornerback, but most teams project him to safety.

MISCELLANEOUS
There were some rumors that Saginaw (MI) Heritage wide receiver Brian Cole, a 2015 prospect, was offered by Michigan.  However, that is not a solid offer, and he was apparently told he’ll have to wait until his junior year for an offer.