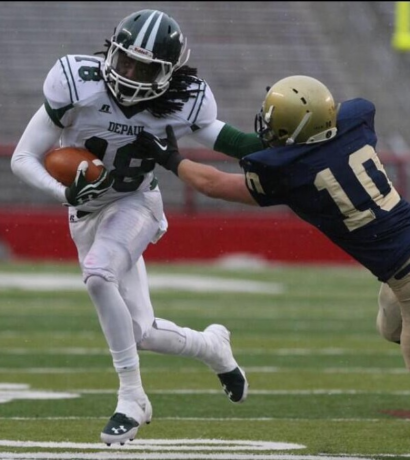 ADDED TO THE BOARD: 2015
Clemmons (NC) West Forsyth defensive end Jalen Dalton was offered by Michigan. Dalton is a 6’5″, 220 lb. prospect with offers from Clemson, Florida State, North Carolina, North Carolina State, South Carolina, Tennessee, and Virginia Tech, among others. He’s a 247 Composite 4-star, the #8 weakside end, and #96 overall. Dalton is a long, athletic kid who makes a lot of plays with his speed, knocking down passes, etc. and I like the enthusiasm and energy I see in his highlights. He could afford to be more physical, and that could happen as his frame fills out, but he looks like a weakside end all the way.

Randleman (NC) Randleman wide receiver Juval Mollette was offered by Michigan. Mollette is a 6’4″, 187 lb. prospect with offers from Clemson, North Carolina, North Carolina State, Ohio State, and Tennessee, among others. He’s a 247 Composite 4-star, the #25 wide receiver, and the #209 player overall. Mollette is a tall, long-striding receiver who’s in the mold of a physical, jump ball type of guy rather than a burner. He appears to be leaning toward North Carolina at this point in his recruitment, despite a pretty good offer list.


ADDED TO THE BOARD: 2016
Traverse City (MI) West offensive tackle Thiyo Lukusa was offered by Michigan. Lukusa is a 6’5″, 300 lb. prospect with offers from Akron, Michigan State, and Wisconsin; all but the Michigan State offer came on Thursday of last week. While he plays left tackle in high school, he looks to me like a future offensive guard. Lukusa camped at Michigan in June 2013 and was considered to be a Michigan lean if they offered, but the Spartans’ early offer had him considering committing to the bad guys. The Wolverines might be playing from behind, but a spate of new offers could slow down the process.

Wayne (NJ) De Paul running back Kareem Walker was offered by Michigan. Walker is a 6’1″, 195 lb. prospect with offers from Penn State, Rutgers, and Temple. As a sophomore in 2013, he had 115 carries for 1,164 yards and 12 touchdowns. Not just because of his dreadlocks, but if you watch his highlight film, his acceleration and stride are reminiscent of Denard Robinson. Walker is a different style of runner overall, but watching him burst upfield brings back good memories.

OFF THE BOARD
Washington (DC) Friendship Collegiate cornerback Jalen Tabor stiffed Arizona and former Michigan coach Rich Rodriguez when he flipped from the Wildcats to the Florida Gators. Tabor had just committed to Arizona less than a week before flipping, so they didn’t have much time to celebrate the recruiting victory. An early enrollee, Tabor is planning to start classes today, so Rodriguez won’t have a chance to sway him back before National Signing Day.

MISCELLANEOUS
This isn’t worth putting in its own post, but some of the early enrollees posted on Twitter the jersey numbers they’ll wear to start their careers. Quarterback Wilton Speight will wear #19, wide receiver Drake Harris #14, defensive tackle Bryan Mone #90, and linebacker Michael Ferns #46.