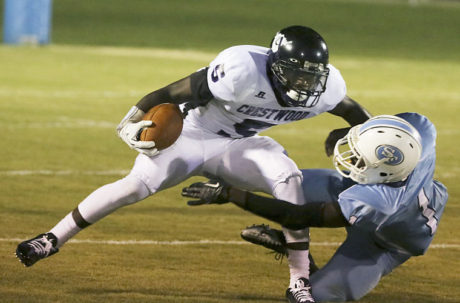 ADDED TO THE BOARD: 2015
Sumter (SC) Crestwood running back Ty’Son Williams was offered by Michigan. Williams is a 5’11”, 200 lb. prospect with offers from Clemson, Georgia, North Carolina, North Carolina State, and South Carolina, among others. He’s a 247 Composite 4-star, the #24 running back, and #313 overall. As a junior in 2013, he had 81 carries for 848 yards and 15 touchdowns, plus 8 catches for 118 yards. Williams has some good speed and decent vision, but sometimes he seems to lack the necessary balance for the cuts he wants to make; he’s a little stiff and often seems to be about to fall down.

ADDED TO THE BOARD: 2016
Orchard Lake (MI) St. Mary’s linebacker Daelin Hayes was offered by Michigan. Hayes is a 6’3″, 225 lb. prospect with offers from Michigan State and Tennessee. He missed a large part of his sophomore season due to injury. Hayes is the cousin of Michigan redshirt junior running back Justice Hayes, but he’s also teammates with Tyson Smith (class of 2015, committed to Michigan State) and Joshua Ross (class of 2017, uncommitted), so there are pulls in multiple directions. The younger Hayes plays running back, too, but the Wolverines offered him as an outside linebacker.

OFF THE BOARD
Charlotte (NC) South Mecklenburg safety Stephen Griffin committed to Tennessee. Griffin picked up the Michigan offer about a month ago but did not appear to be strongly interested.

Glassboro (NJ) Glassboro wide receiver Juwan Johnson committed to Penn State. Johnson is a tall, physical receiver with pretty good speed, so Michigan will have to contend with him for the next several years. Johnson had expressed passing interest in the Wolverines but was not likely to join the class at any point.

Bellflower (CA) St. John Bosco quarterback Josh Rosen committed to UCLA. His pledge was not a surprise at all, but he had made a surprise visit to Ann Arbor the weekend before announcing his commitment. The visit went well but he was always someone who wanted to stay close to home and disavowed the cold weather he would face in Michigan. Some sources have suggested that if Jim Mora, Jr. leaves for another job or if Bruins starter Brett Hundley sticks around for his senior year in 2015, Michigan (and others) might be back in the hunt for Rosen’s services. By the time any of that transpired, however, the Wolverines would likely already have a commitment from another quarterback prospect.

MISCELLANEOUS
Here’s a list of visitors who made it to Ann Arbor this past week/weekend.

I did a scouting report on Detroit (MI) Cass Tech running back Michael Weber.

Richmond (VA) St. Christopher’s cornerback Garrett Taylor is announcing his college decision at 12:30 p.m. today via Twitter. Most people expect him to choose Michigan with Stanford being the other possibility. 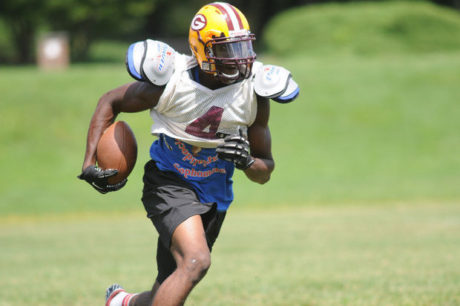 ADDED TO THE BOARD: 2015
Glassboro (NJ) Glassboro wide receiver Juwan Johnson was offered by Michigan. He’s a 6’4″, 196 lb. prospect with a reported 4.4 forty who also has offers from Arkansas, Ohio State, Penn State, Pitt, and Rutgers, among others. In the South Jersey championship game, he returned an interception 31 yards for a touchdown and a punt 75 yards for a score. He’s a 247 Composite 4-star, #16 athlete, and #156 player overall.

Chesapeake (VA) Oscar Smith defensive end Josh Sweat was offered by Michigan. He’s a 6’5″, 230 lb. prospect with offers from Clemson, Florida State, Georgia, Ohio State, Oklahoma, and USC, among others. He’s a 4-star, the #5 weakside end, and the #56 overall prospect in 247’s Composite rankings. This is a somewhat interesting development because Michigan has supposedly been telling St. Paul (MN) Cretin-Derham defensive end Jashon Cornell that he was their only target in the class for weakside end, but while Sweat is listed as a weakside end, he looks to me more like an eventual strongside end due to his size and some stiffness in his movements. Of course, it’s also possible that Michigan is changing their strategy for 2015. I do not expect Michigan to be a major player in Sweat’s recruitment, though. Oscar Smith also produced defensive tackle Andrew Brown in the 2014 class, a Michigan target who is a 5-star prospect headed to Virginia.

OFF THE BOARD
Peyton (CO) Falcon running back Kalen Ballage committed to Arizona State. This is about as soft a commitment as they come, with him saying ASU is “the school I can most see myself at.” Ballage also went ahead with his scheduled visit to Nebraska this past weekend and plans to visit Washington, while Boise State and Michigan State were also thought to be in the running up until recently. Planned visits to Michigan never panned out, and while Michigan doesn’t appear to be in the running anymore, I wouldn’t be at all surprised if Ballage signs somewhere other than Arizona State. I wrote up a scouting report on Ballage back in May.

Oradell (NJ) Bergen Catholic defensive end Garrett Dickerson committed to Northwestern. Dickerson eschewed offers from national powerhouses like Alabama, Florida State, and Ohio State for the Wildcats, who garnered his interest with their academics . . . and the presence of sophomore wide receiver Cameron Dickerson, Garrett’s older brother; the elder Dickerson has had 2 catches for 20 yards in each of the last two years’ games against the Wolverines, and the 2012 game included his first collegiate touchdown. Garrett is the 247 Composite’s #198 player overall.

Aliquippa (PA) Aliquippa safety Dravon Henry committed to West Virginia. Henry could play running back, receiver, cornerback, or safety at the next level, but the Mountaineers are expected to try him at safety. He’s the 247 Composite #8 athlete and #110 player overall.

Wayne (NJ) St. Joseph Regional safety Kiy Hester committed to Miami. Hester was previously committed to Rutgers. He took an official visit to Michigan State at the end of November, and it was thought to be a three-horse race between Miami, MSU, and Rutgers, so Michigan somewhat missed a bullet by him going to the Hurricanes; he’s a 247 Composite 4-star, the #17 safety, and #217 player overall.

Jersey City (NJ) St. Peter’s Prep running back Jonathan Hilliman changed his commitment from Rutgers to Boston College. Rutgers has been leaking recruits during and after their 6-6 season. I wrote up a scouting report on Hilliman a little over a year ago, after his junior season highlights were posted online. He ended his senior year with a state title game loss to Paramus (NJ) Catholic and the duo of Juwann Bushell-Beatty and Jabrill Peppers, both of whom are committed to Michigan. On the plus side for Hilliman, he’ll be joining a program that just watched senior running back Andre Williams run for 2,102 yards and 17 touchdowns.

Belmont (NC) South Point linebacker Tanner Muse committed to Clemson. Muse is a 2015 prospect who earned a Michigan offer not long ago, but he was considered to be a tough pull out of the south. He’s a 4-star and the #337 player overall, according to 247’s Composite rankings.

MISCELLANEOUS
Here’s a list of players who visited Michigan this past weekend.