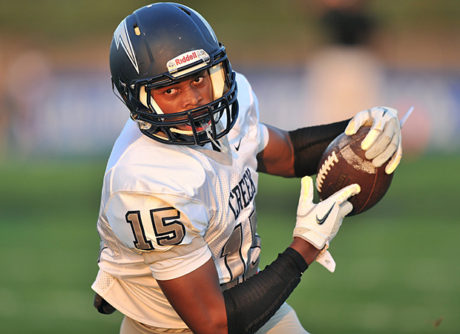 ADDED TO THE BOARD: 2015
Kaplan (LA) Kaplan defensive end Jalen Bates was offered by Michigan. He’s a 6’5″, 240 lb. prospect with offers from Louisiana Tech, Louisiana-Lafayette, Ole Miss, TCU, and Texas Tech. He’s a 247 Composite 4-star, the #12 weakside end, and #340 overall. He’s very raw and needs to work on his stance, footwork, hand use, just about everything – but he does have some physical talent. Bates is the cousin of former Michigan linebacker Jonas Mouton.

Bellevue (WA) Bellevue offensive tackle Henry Roberts was offered by Michigan. He’s a 6’6″, 263 lb. prospect with offers from Oklahoma, Oregon, Stanford, USC, Washington, and Wisconsin, among others. He’s a 247 Composite 4-star, the #29 offensive tackle, and #236 overall. Roberts is a lanky kid who obviously needs to put on weight, but there’s not a lot of film on him. Bellevue is one of the top programs in the state of Washington and produces quite a bit of talent for the Pacific Northwest, and former Michigan offensive lineman Stephen Schilling came from there.

ADDED TO THE BOARD: 2016
Sicklerville (NJ) Timber Creek wide receiver Cameron Chambers was offered by Michigan. He’s a 6’3″, 195 lb. prospect with offers from Arkansas, Ohio State, Pitt, Rutgers, Wisconsin, and West Virginia, among others. 247 Sports, which released its 2016 rankings last week, placed him as a 4-star, the #14 wide receiver, and the #83 player overall for his class. He does not quite look 6’3″ in his highlights, although he may have hit a growth spurt this offseason; however, he shows some good straight line speed and claims a 4.59 forty.

Tampa (FL) Catholic wide receiver Nate Craig was offered by Michigan. He’s a 6’2″, 195 lb. prospect with offers from Auburn, Clemson, Florida, Miami, Ohio State, and Tennessee, among others. He’s a 247 Sports 4-star, the #18 wide receiver, and #92 overall. Personally, I would rate Craig ahead of Chambers because he looks superior in almost every category.

OFF THE BOARD
Fort Lauderdale (FL) St. Thomas Aquinas cornerback Rashard Causey committed to Florida Atlantic. Causey has offers from Florida, Miami, Notre Dame, South Carolina, and UCLA, along with lots of others, so I don’t quite understand this one. I know little about Causey because he didn’t show much interest in his Michigan offer, but this is a commitment I would watch down the road for a change of heart.

Jersey City (NJ) St. Peter’s Prep cornerback Minkah Fitzpatrick committed to Alabama. I wrote a scouting report on him back in February. I mentioned three teams with the best chance to get him, and the Crimson Tide was one of them (with Michigan and Ohio State the others, although South Carolina was also lurking). Michigan held off on offering for a while, which may have hurt their chances, but it’s tough to believe they could have pulled ahead of the Tide.

Bradenton (FL) IMG Academy cornerback Marcus Lewis committed to Florida. Lewis recently transferred from Washington (DC) Gonzaga Prep, which signaled to me a desire to play down south. Not long after that was announced, he committed to the Gators. Lewis could play corner or safety at the next level.

MISCELLANEOUS
Here’s a list of this past weekend’s visitors. 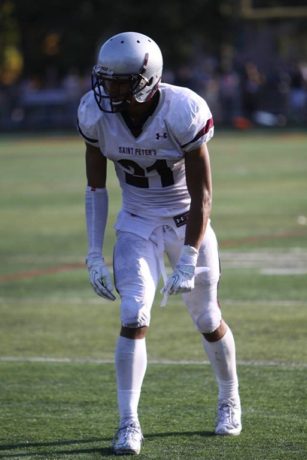 Strengths: Lanky with long arms . . . Able to deflect passes from a trail position . . . Good straight line speed once he gets into sprinting phase . . . Playmaker who likes to go for the ball . . . Won’t settle for always making the safe play . . . Willing to be decently physical . . . Adjusts well out of backpedal to attack shorter throws . . . Takes good angles coming downhill from his part-time safety position . . . Physical runner with the ball in his hands and keeps legs churning through contact

Weaknesses: Not a big hitter . . . More of an ankle grabber . . . Does not wrap up and drive ball carriers but often tries to gator roll them to the ground . . . Needs to stay lower in his backpedal . . . Lacks ideal hip flexibility . . . May be prone to double moves and small, quick receivers . . . Can be outmuscled by bigger receivers

Projection: Cornerback. Fitzpatrick has good physical skills overall, but right now he lacks some strength, which affects multiple phases of his game. He has very good speed when he can get going, but his short area quickness is a question for me. Because of that, I think he might have more of a long-term future as a safety. A good college program should see him turn into a 195-200 lb. corner, and that added size and strength will help him be a physical press corner. I also think Fitzpatrick could be a factor in the kick return game with his ability to find seams and get upfield.

Reminds me of: Donovan Warren but faster

Likelihood of committing to Michigan: Fitzpatrick released a top ten that included Alabama, Florida State, Miami, Michigan, North Carolina, Notre Dame, Ohio State, Penn State, Rutgers, and South Carolina. He has a good relationship with Michigan incoming freshman cornerback Jabrill Peppers, but Michigan held off on offering Fitzpatrick for a while, which helped to allow teams like Alabama and Ohio State to build relationships. Personally, I believe the three teams with the best chance to get him are Alabama, Michigan, and Ohio State (in no particular order).