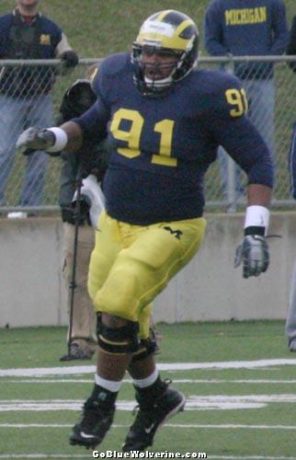 END_OF_DOCUMENT_TOKEN_TO_BE_REPLACED

Review of 2005 Recruiting: The Running Backs

The Offerees
Andre Criswell
High school: Detroit (MI) Renaissance
Ratings: Rivals 2-star FB; Scout 2-star RB
College: Michigan
Other notable offers:
Scoop: Criswell arrived as a fullback in 2005 and redshirted behind Kevin Dudley.  As a redshirt sophomore in 2007, Criswell caught 2 passes for 32 yards in mop-up duty against Eastern Michigan and Minnesota.  On special teams he made 4 career tackles.  When Rich Rodriguez arrived in 2008, he gave Criswell a chance to play at both tight end and defensive end, but Criswell never saw the field at either position.  He was not given a fifth year of eligibility, but instead spent the 2009 season as a graduate assistant.

Kevin Grady
High school: Grand Rapids (MI) East
Ratings: Rivals 5-star RB, #22 overall; Scout 5-star, #5 RB
College: Michigan
Other notable offers: Michigan State
Scoop: Grady arrived as an all-everything tailback out of western Michigan and spent his freshman season as the primary backup to Mike Hart.  He ran the ball 121 times for 483 yards (4.0 yards per carry) and 5 touchdowns; he also caught 14 passes for 113 yards (8.1 yards per catch).  However, his freshman year was the high point of his career.  Off-the-field troubles and the healthy return of Hart limited him to 55 carries for 187 yards (3.4 yards per carry) and 3 touchdowns, in addition to just 1 catch for 8 yards.  He tore his ACL in the spring of 2007 and sat out the following season.  As a redshirt junior in 2008, Grady saw limited time as a backup tailback behind Sam McGuffie and Brandon Minor, notching just 14 carries for 33 yards (2.4 yards per carry) and 1 touchdown.  He accepted a switch to fullback for the 2009 season, and ended the year with 10 carries for 80 yards and 1 touchdown, in addition to 5 catches for 29 yards (5.8 yards per catch).  Grady ended his career with 200 carries for 783 yards (3.9 yards per carry) and 10 touchdowns, plus 20 receptions for 150 yards (7.5 yards per catch).  He was not drafted in the 2010 NFL Draft and has not played in the NFL.

Mister Simpson
High school: Cincinnati (OH) Colerain
Ratings: Rivals 3-star, #20 RB; Scout 3-star, #53 RB
College: Michigan Cincinnati Jail
Other notable offers: Bowling Green, Cincinnati, Maryland
Scoop: Simpson redshirted as a true freshman in 2005.  He left the program prior to the 2006 season and transferred to Cincinnati, where he never saw the field due to a little problem called “burglary.”  His most recent arrest, as far as I can tell, was in January 2011.  His football career appears to be over.

Conclusions
Biggest bust: Kevin Grady.  Not only did he never have a 100-yard game, but he rushed for less than 800 yards over five years and had multiple off-the-field issues.  As far back as the recruiting services go (2002), Grady might be Michigan’s biggest recruiting bust.

Biggest miss: Rashawn Jackson.  He’s the only choice, but since he’s the only one of the four to sniff the NFL, I guess he fits here.

Best in class: Jonathan Stewart.  Stewart ran for 2,981 yards and 27 touchdowns at Oregon.  Then he was a first round pick of the Carolina Panthers.  He has 3,500 rushing yards for the Panthers and 26 rushing touchdowns.

All offers are recorded on the 2005 Offer Board.