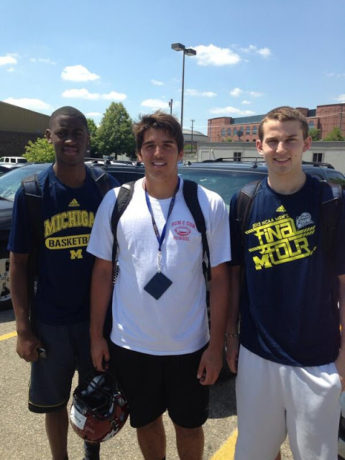 Natrona Heights (PA) St. Joseph’s offensive lineman Jon Runyan, Jr. committed to Michigan on Tuesday over offers from no one else.

Runyan measured in at 6’4″ and 245 lbs. recently. To my knowledge, no further statistics or measurements are available at this time.

Runyan is the son of former Michigan offensive tackle Jon Runyan, who played college ball in the early- to mid-1990’s, earning All-Big Ten accolades, getting selected in the 4th round of the NFL Draft by the Houston Oilers, and becoming a Pro Bowler in his years with the Oilers, Tennessee Titans, and Philadelphia Eagles. The younger Runyan camped at Michigan last week, where he earned an offer from the Wolverines’ staff. He said at the time that it was basically a guarantee he would commit, so this is about as surprising as another bout of Mark Dantonio constipation. Previously, Runyan had camped at Ohio State and visited Penn State for their junior day.

Runyan is a very technical player, which one should expect as the son of such a high-level football player. He keeps a nice, wide base and moves his feet well after contact. He does a good job with hand placement and does not get over-extended. He bends well at the knees and can roll his hips to get extension. I like the way he zone blocks and works in combination with his linemate on the right side, because he’s quick enough to cut off penetration and strong enough to get movement.

Obviously, Runyan needs to add bulk to his 245 lb. frame. He seems to lack some upper body strength, which will come with added bulk. I would also like to see him get a little bit nastier. He finishes blocks to the extent that the defender is out of the play, but he doesn’t block to the whistle in order to demoralize defenders or get them off their game. I would like to see him drive guys into the ground or until the echo of the whistle.

Overall, I would have no problem playing Runyan at offensive tackle if he adds a little bit of length. He has the foot speed and coordination to be a blind side tackle if necessary. He may have to move inside to guard if he doesn’t hit that growth spurt. So much depends on size that it’s tough to project him far down the road, but based on his genes, athleticism, and technique, I think he could be a very good college player.

This is Michigan’s second commitment for the class of 2015.

TTB Rating: N/A. I am not assigning TTB Ratings until the 2014 class wraps.