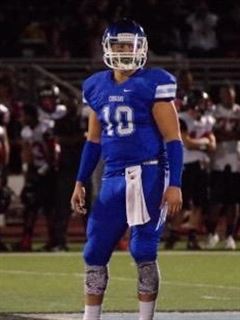 Norco (CA) Norco quarterback Victor Viramontes committed to Michigan on Monday. He chose the Wolverines over offers from Colorado, Nebraska, Washington State, and Wisconsin, plus a few others.

Viramontes participated in Michigan’s satellite camp in Fresno, California, last week. Despite being in a hotbed of talent, the participation in Fresno was not at the same level as previous stops, so it looked like the Summer Swarm tour was ending on a bit of a flat note. But reports came out of the camp that head coach Jim Harbaugh was keeping an eye on Viramontes, pulled his father aside, and had a lengthy discussion. An offer came following the camp, and it only took a few days for “Vicious” Vic Viramontes to publicly accept, despite never having visited Ann Arbor.

EDIT: Here’s an excerpt from my post on Monday morning:

Even better is that his nickname is “Vicious Vic,” so if he ever decides to pursue MMA, he’s got a pretty nice, alliterative name for it: Vicious Vic Viramontes. (You can hear Michael Buffer saying that name, can’t you?) Anyway, Viramontes is a veritable virtuoso on the field who has various valuable skills, like vision and a vibrant arm, to victimize a defense on his way to taking a viselike, victorious grip on a quarterback job. (That’s my way of saying that Vicious Vic can probably go somewhere and be The Man at quarterback in this class, rather than possibly playing second violin fiddle to Brandon Peters.)

I see a little bit of Jim Harbaugh himself in Viramontes. The Norco quarterback plays with a carelessness for his body that shows competitiveness and passion for the game. He will bulldoze tacklers or jump over guys rather than run out of bounds. That’s probably part of why he was offered. As for his more traditional quarterback skills, Viramontes has a strong arm and can throw the outs, the deep ins, the long ball, etc., and he makes some of those throws off of his back foot. He also has an ability to feel pressure in the pocket and keep the play alive while still keeping his eyes downfield. When he tucks the ball to run, he brings all 220 lbs. with him, and at a faster speed than you might guess. He’s not afraid to run over would-be tacklers, and Derrick Green could learn a thing or two from Viramontes about balance and running through low tackle attempts. He also shows nifty feet to keep defenders off balance, he can cut without losing much speed, and he can outrun most of the guys on a high school field.

All those positives aside, Viramontes has a lot of mechanical things to work on before he can succeed at the next level. I imagine Harbaugh will work with him on his footwork and dropback, whether it’s from under center or out of shotgun. He tends to favor one side directly on the snap, and he does not look off defenders, although his ability to keep the play alive can get guys out of position at times. He finishes his throws high, but he tends to drop the ball down, which elongates his delivery like a mirror image of Tim Tebow. He also carries the ball loosely with one hand when he scrambles, which can lead to turnovers. The big rumor with him is that he wings everything with 100% velocity, so he will need to dial it back at times; there are examples of a little touch in his highlights, though, so the ability is there but maybe not with consistency. A lot of coaches would probably advise him to run out of bounds and take a little less of a beating, too.

When it comes to quarterbacks, I am of the opinion that too many is better than too few. I said this many times during the 2012 and 2013 recruiting cycles, but it was a mistake to skip the 2012 cycle and crown Shane Morris as the heir apparent for 2013. At one time under Brady Hoke, Michigan had about 12 scholarship linebackers and three quarterbacks, so they had a full four-deep at linebacker – a position that’s often interchangeable with at least one of the other linebacker positions – and went just three-deep at the most important spot on the field. Numbers breed competition, and sometimes you need your second or third quarterback. Quarterbacks are also smart guys who are often some of the better athletes on a team, so they can transition to tight end, slot receiver, safety, etc.

As for Viramontes himself, he joins Brandon Peters at quarterback in the 2016 class. The nice thing about this addition is that it allows for so much flexibility. Even if Peters proves to be the superior quarterback, Michigan could employ Viramontes as a Tebow- or Blake Bell-type short yardage player who can be a dual-threat. With the way he plays, he could be a short-yardage back like Wyatt Shallman, an H-back like Aaron Shea, a linebacker, maybe a safety, maybe a special teams coverage guy. I said previously that I thought Viramontes would end up committing elsewhere because he could be “The Quarterback” in another school’s class. Instead, it looks like he will be Michigan’s Swiss Army knife to deploy as needed. I do think he can be a full-time quarterback with some development because the physical tools are there, so that part of his game comes down to whether he can handle the information and tutelage from Harbaugh.

Norco is a school that produces quite a bit of talent, sending players to places such as Arizona State, Boise State, Duke, UNLV, USC, and others over the years. Harbaugh has some experience with a Norco product in the form of former Stanford running back Toby Gerhart. While out in California, Michigan also offered Viramontes’s teammate, 2016 linebacker/safety Troy Dye.