Could Shea Patterson come to Michigan? 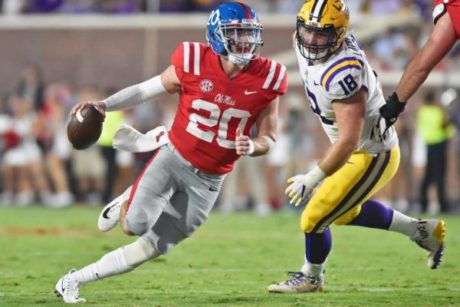 WHO IS SHEA PATTERSON?

For those of you hardcore followers of Michigan (and Michigan recruiting), you may have heard in recent weeks some rumblings about Shea Patterson. Patterson is a sophomore quarterback for Ole Miss, but Ole Miss’s recent sanctions from the NCAA – a bowl ban through the 2018 season and some scholarship reductions – may open a door for him to transfer. Over the past two seasons, he completed 238/392 passes (60.7%) for 3,139 yards, 23 touchdowns, and 12 interceptions as a part-time starter. His 2017 season was shortened by a torn knee ligament, but he should be ready to play in 2018.

Patterson has family in the Toledo area and his grandfather, George Patterson, played for the Detroit Pistons. He was offered by Michigan as a part of the 2016 recruiting class, but he was committed to Arizona at one point and eventually flipped to Ole Miss. He was a 5-star, the #1 pro-style quarterback, and #4 overall in his recruiting class. He attended high school in Louisiana before spending his senior year at IMG Academy in Bradenton, FL. For a kid just finishing his sophomore season, he has been all over the map in the last few years with his living situation and allegiances – Texas, Arizona, Louisiana, Florida, Mississippi.

Hit the jump for further thoughts on Patterson.