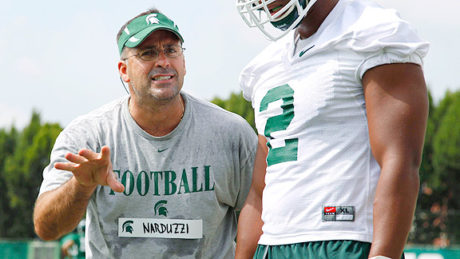 Pat Narduzzi
Age: 48
Current position: Michigan State defensive coordinator
Salary: $904,583 per year
Head coaching experience: None
History: Narduzzi played linebacker at Youngstown State and Rhode Island before starting a coaching career at Miami (OH). He then coached linebackers at Rhode Island, the defense at Rhode Island, linebackers at Northern Illinois, the defense at Miami (OH), the defense at Cincinnati, and then the defense at Michigan State from 2007 to the present under Mark Dantonio. He has been attached to Dantonio at the hip since 2004, and Narduzzi earned the Broyles Award in 2013 for being the top assistant coach in the country.
My thoughts: Narduzzi has said some inflammatory things about Michigan in the past, and moving to Michigan would be a bit of a slap in the face to his mentor, Dantonio. However, Narduzzi seems to be holding out for a top-flight job, and there aren’t a ton of opportunities. Last year may have been his best shot, and he might miss his window if he waits too long. He represents aggressive defense, but his offensive preference would be questionable; a run-oriented, pro-style offense would probably be his aim based on MSU’s offense over the last several years. I do not think he would fit in well with Michigan’s atmosphere, and defense is not so much of a question as offense these days.
Likelihood of coming to Michigan: If offered the job, I believe Narduzzi would take it. But with no head coaching experience and a questionable amount of influence on the defense (Dantonio was a very good defensive coordinator at one point), Narduzzi would be a B- or C-list option.