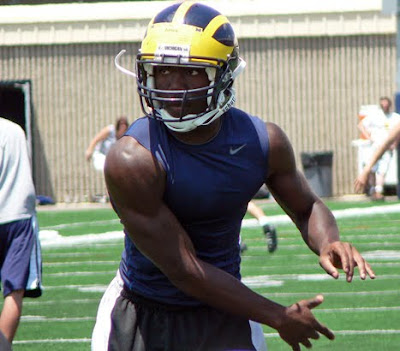 Jones is a very athletic prospect that Michigan pulled from historically atypical Wolverine territory – South Carolina. Oddly, no Michigan players came from South Carolina prior to 1993. Assuming Jones makes it to campus, he will be the eighth South Carolina native to don the maize and blue. Five of them will be on the 2010 roster – cornerback JT Floyd, defensive lineman Adam Patterson, wide receiver Junior Hemingway, offensive guard Quinton Washington, and Jones.

Jones has stated that he would be open to playing whatever position the coaches want him to play. His allegiance to these coaches has been strong because they were the first ones to offer him. So while Jones was recruited to play quarterback, he could eventually move to receiver or defensive back. When I think of how Jones’ career might pan out, I can’t help but think of Paul Thompson, the former Oklahoma Sooner who bounced back and forth between receiver and quarterback.

I expect Jones to redshirt in 2010. He’s an inexperienced quarterback, he played wide receiver in a South Carolina all-star game, and the local newspaper thought he would play defensive back in college. So he’s got some versatility, but the phrase, “Jack of all trades, master of none” comes to mind. Hopefully he can find a position on which to concentrate and contribute a couple years down the road. In the meantime, Michigan has enough talented quarterbacks to get through the 2010 campaign.