Last night defensive end Kwity Paye went #21 overall to the Indianapolis Colts. I discussed offensive tackle Jalen Mayfield yesterday as a possible first rounder (LINK), but as expected, he did not go off the board on night one.

So besides Mayfield, who’s next?

Wide receiver Nico Collins measured in at 6’4″, 215 lbs., having lost weight since he last wore a Michigan uniform in 2019. He ran a 4.43 at Michigan’s pro day, broad jumped 10’5 3/4″, and showed a 37.5″ vertical. Even though I have doubts about that forty time, I don’t think anyone expects him to be a burner in the NFL. He can be a matchup probably with his size. I thought he might be a good fit for a team like the Philadelphia Eagles, but the Eagles already went with a wide receiver (albeit a small one) in Devonta Smith.
Projected draft spot: Rounds 2-3

Fullback Ben Mason weighed in at 6’2″ and 246 lbs. He did 29 reps on the bench, ran a 4.72, and broad jumped 9’9″. Fullbacks have gone the way of the dodo in recent years, but he’s such a devastating lead blocker that I think he can fill a role on a roster somewhere.
Projected draft spot: Rounds 6-7

Running back Chris Evans is 5’11” and 211 lbs. He clocked a 4.44 forty, did 20 bench press reps, had a 40.5″ vertical, and broad jumped 10’7″. His pro day was arguably the most impressive of any Michigan player, and yet his overall lack of production at Michigan leaves some questions about what he can really do at the next level. He never topped 685 rushing yards in a Wolverines uniform, and his final season included just 73 rushing yards and 87 receiving yards. I think he can play in the NFL, but it would be a little odd for him to get drafted.
Projected draft spot: Round 7 or UDFA

Other draft-eligible players I do not expect to get drafted:

Nordin has had an up-and-down career at Michigan. He was a highly touted recruit and somewhat unexpectedly redshirted as a freshman. He has a big leg, but he never handles kickoff or punting duties. During his redshirt freshman season in 2017, he missed three extra points. Michigan brought in a player (Jake Moody) in 2018 who was supposed to grayshirt, and that guy ended up taking a bunch of Nordin’s opportunities.

So I really can’t predict how Nordin will fit in during the 2020 (a.k.a. spring 2021) season. He might be the starting place kicker, and Moody might finally take over the job for good. The somewhat odd thing is that the coaching staff brought Nordin back for a fifth year, when a lot of people in a somewhat tenuous position would not be given a roster spot or would just decide to grad transfer. So the staff must have a plan for him, but I don’t know what it is.

I will be the first to admit that I have no idea how this kicking situation will play out in 2019. Nordin was the starting kicker in 2017 and had a very good season. Things started off pretty well in 2018, too, but then Nordin seemed to lose his mojo. By the end of the year, he had ceded duties to Jake Moody; Nordin played against Ohio State only for an onside kick attempt, and he didn’t play in the bowl game against Florida.

Only the coaching staff knows how this will shake out, and even they might discover some extra turbulence. Nordin could do anything from handle every kickoff, extra point, and field goal attempt . . . to literally never stepping on the field in 2019. Either way, the Wolverines have two scholarships devoted to place kickers for 2019 and they probably don’t want to repeat that again in 2020, so this could be a make-or-break season for Nordin. If he permanently loses the job to Moody, he might end up in the Ex-Wolverine Updates.

Can Quinn Nordin win his job back (LINK)?

Here’s a nice interview with Ben Wallace from The Athletic (LINK). Wallace is my favorite Piston of all time. I’ve owned exactly one shirt/jersey in my lifetime with a player’s name on the back, and it was his. I wore that until a sleeve got torn when I was playing basketball, and then I tore off the sleeve and continued to wear the shirt until it totally died.

The All-2019 #NFLCombine Defensive Team! pic.twitter.com/z4ul3rWslz 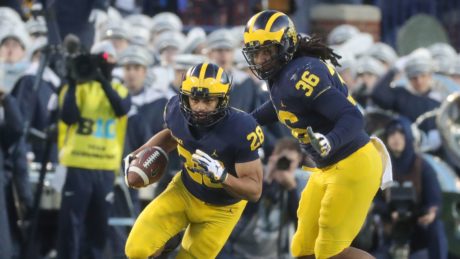 Holy blowout. I thought Michigan would win by about 10 points, and I think this outcome surprised just about everyone. Michigan’s domination of Penn State’s offense wasn’t too much of a surprise, but the Wolverines’ putting up 42 points was. I was thinking more along the lines of 24-14.