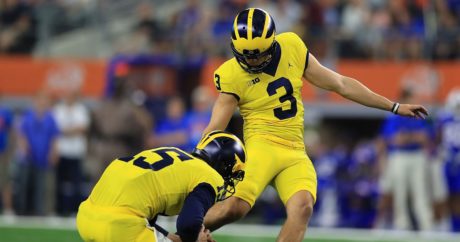 Nordin was expected to contribute in 2016, but an injury held him back. Last year he started off with a bang when he hit two 50+ yard field goals against Florida in the 2017 opener. He went 4/6 in that game and then hit 10 in a row. After that he hit a snag, missing 3 in a row, before hitting 5 in a row to end the season, including a 4-for-4 performance in the Outback Bowl. Nordin has a very strong leg, but he’s inconsistent at this point in his career.

I strongly considered ranking Nordin higher on this list. I had a very hard time ordering the players in the top 15 or so. I could probably make a case for Nordin to be as high as #3 on the list, and probably not lower than #15. I settled on him here because he’s not an every-down player, but he should still have a heavy impact on how the 2018 season goes. Michigan has some tough games on the docket this season, and not many of them should be blowouts either way. Having an effective field goal kicker could be the difference in several games. Nordin has the potential to be one of the top few guys at his position in the country, but he shouldn’t be missing 3 extra points and going several games between made field goals.