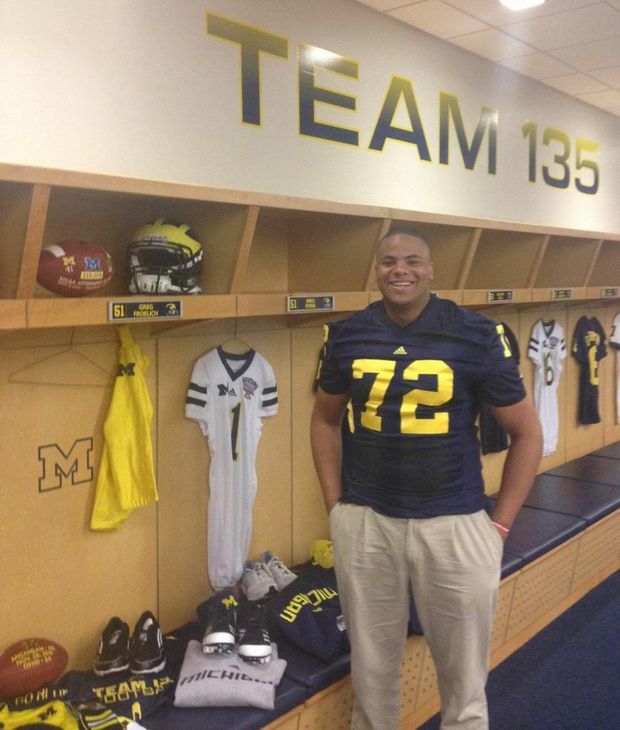 The incoming freshmen have jersey numbers. And, boy oh boy, this is an exciting time and we’re all nerds.

The following players’ jersey numbers have not been released yet (previous number in parentheses):

I posted the recruiting grades for the offensive side of the ball (LINK), so here are the grades for the defense. Rankings used are from the 247 Composite.

DEFENSIVE END
Lost from 2014: Brennen Beyer (graduation), Frank Clark (suspension/graduation)
Commits: Shelton Johnson, Reuben Jones
Grade: B+
Comments: Michigan didn’t land the highest value targets, and the two guys they brought in were last-minute fixes who don’t provide a huge speed rush that Michigan has been lacking in recent years. But Michigan does need numbers at the position, where the graduations of Beyer and Clark left the team with few viable replacements and a couple guys who perhaps should be playing defensive tackle instead of on the edge. Johnson (3-star, #20 SDE) has some high upside and Jones (3-star, #44 DE) has potential, too, so at least one of these guys should pay dividends sooner or later.

DEFENSIVE TACKLE
Lost from 2014: None
Commits: None
Grade: C
Comments: Neither coaching staff deemed defensive tackle as a priority. Hoke only offered a handful of guys and actually backed off several targets last summer, and Harbaugh hardly made an attempt aside from offering defensive tackle Kendrick Norton, who never visited. Michigan is in a situation where they have a lot of guys in their middle years of football, but they will need to renew their efforts in 2016 to avoid a huge age gap.

LINEBACKER
Lost from 2014: Michael Ferns III (transfer), Jake Ryan (graduation)
Commits: None
Grade: D
Comments: Jake Ryan was a Butkus Award finalist and a stud at middle linebacker for Michigan last season, but the Wolverines should not miss him too awfully much with four senior linebackers scheduled to be on the roster in 2015 (Joe Bolden, Royce Jenkins-Stone, Desmond Morgan, James Ross). However, the only non-senior to have played much so far is junior Ben Gedeon, which means Michigan will be searching for answers in 2016. It would have been a good idea to land at least one guy to redshirt and adjust to the college game, because that guy could have been deployed in 2016. Assuming the five aforementioned guys suck up most of the playing time in 2015, the Wolverines will be very green in 2016.

CORNERBACK
Lost from 2014: Delonte Hollowell (graduation), Raymon Taylor (graduation)
Commits: Keith Washington
Grade: C-
Comments: Much like the running back position, Michigan had two highly touted guys committed at different junctures – Shaun Crawford (Notre Dame) and Garrett Taylor (Penn State) – and both of them slipped out of their grasp. Cornerback is a spot where guys can contribute early, but with Jabrill Peppers moving to safety, the Wolverines are very thin at the position. Washington (3-star, #77 ATH) was a high school quarterback who did not play a ton of defense, so he’s a project. If anyone higher in the pecking order gets hurt, the Wolverines could be in serious trouble, although Peppers has the ability to move back to corner if necessary.

SAFETY
Lost from 2014: None
Commits: Tyree Kinnel
Grade: A-
Comments: I don’t see Kinnel (4-star, #11 S)as a huge playmaker in college, but he’s a good field general with some respectable athletic skills. The only safety scheduled to depart after 2015 is starter Jarrod Wilson, and most of the other safeties on the roster are good athletes without a great understanding for the game. So if new safeties coach Greg Jackson can coach those guys up, Michigan should be in very good shape here.

KICKER/PUNTER
Lost from 2014: Will Hagerup (graduation), Matt Wile (graduation)
Commits: Andrew David
Grade: A
Comments: Punter is a position that can often be filled by walk-ons, which is likely what will happen in 2015 with Kenny Allen expected to take over the punting job. With no walk-on kickers daring to take the job, Michigan offered one guy and one guy only to be their placekicker, and they got him. David (3-star, #9 K) will be in a situation where he has a special teams coach in John Baxter, which should speed his development at least a little bit. Michigan got exactly whom they wanted. 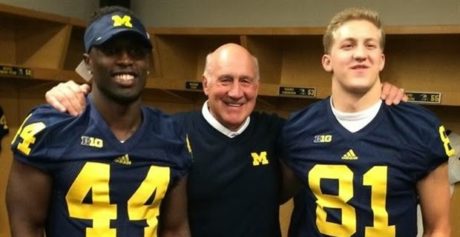 Lakeland (FL) Lake Gibson defensive end Reuben Jones committed to Michigan today. Jones was committed to Nebraska from mid-November until just a few days ago, but he did not report a good relationship with the Cornhunskers’ new staff.

Jones started earning offers last spring, and those offers escalated to the level of programs like Louisville, Michigan State, Missouri, and Nebraska as his senior year wore on. He went ahead and committed to Nebraska in November, but that only lasted two months and he did not fit well with new head coach Mike Riley and his staff. When new Michigan defensive coordinator D.J. Durkin was hired out of Florida, he quickly convinced Jim Harbaugh to extend Jones an offer. That pre-existing relationship blossomed into scheduling an official visit, the de-commitment, and then picking the Wolverines during his official visit this weekend. It may have helped that one of Lake Gibson’s assistant coaches is former Michigan offensive guard Ricky Barnum.

Jones is a high-effort player. If you watch his highlights below, the second clip shows him chasing down a wide receiver approximately 50 yards downfield after the guy catches a screen pass. He plays with some reckless abandon and at high speed, which can be a good thing. He plays with a good pad level and fires hard off the ball. He lacks prototypical height for a lineman, but he has a solid frame that should see him carry 260+ pounds eventually.

Speaking of reckless abandon, Jones can be a little undisciplined at times. He can overpursue and get too much depth on his pass rush. He does not use his hands well to shed blocks and tends to try to outmuscle offensive linemen, which will not work so well in college. The physical skills don’t jump out, so he will have to clean up some of the weaknesses and maximize what he can. He also shows some excitability on the field, which can be a positive thing but can also be dangerous.

Overall, Jones is a solid pickup late in the recruiting cycle. I think his lack of physical skills will prevent him from becoming a top-notch player, but he could certainly works his way into being a viable backup or late-career starter. His frame reminds me of former Wolverine Ken Wilkins, although his play on the field is more reminiscent of Mario Ojemudia.

Jones is the seventh overall commit in the 2015 class but the first of the Jim Harbaugh era. He is also only the second defensive player in the class. With a decent number of players on the line, Jones should not be needed immediately, but there is the possibility of him serving as a backup immediately. Michigan lost both starting defensive ends (Brennen Beyer and Frank Clark) to graduation, which leaves junior Taco Charlton and senior Ojemudia penciled in as next year’s starters. The 2014 class included just one defensive end (Lawrence Marshall), so it’s not out of the question for Michigan to continue pursuing the position.