Let’s see more of this guy on offense . . . Donovan Peoples-Jones. Peoples-Jones played quite a bit on Saturday, but I just want to take this opportunity to express how important Peoples-Jones is to this offense. I really think his absence from the field hampered Michigan during the first few weeks of the season. The team was missing its best receiver and the only reliable punt returner. His 4 catches for 62 yards didn’t set the world on fire, but he offers a different element to the team than anyone else can provide.

You can’t ask for much more. The last time Michigan scored at least 52 points, it was just over a year ago in a 56-10 win over Nebraska in year one of the Scott Frost era. The Wolverines needed to put together a complete game in all three phases of the game, and they did so. There were a few mistakes – as there always will be – but the offense was efficient, the defense put up a shutout, and special teams created a fumble while also finally getting a decent punt returner involved once again in Donovan Peoples-Jones. It was a good old-fashioned romp.

RUSH OFFENSE vs. RUTGERS RUSH DEFENSE
Michigan’s pretty bad at running the ball, coming in at #97 nationally (127 yards/game) and #108 in yards per carry (3.5). Starting running back Zach Charbonnet (4.6 YPC) was limited last week, and backup Christian Turner (4.3 YPC) hasn’t shown much. That ineffectiveness is mostly due to an offensive line that can’t get movement and a starting quarterback who won’t run the ball when given a clear read to run the ball; the backup, who will run the ball, has a concussion and won’t play this week. Rutgers is #118 in rushing defense (218 yards allowed/game) and #108 in yards allowed per carry (4.88). Their best performance so far was allowing 277 yards and 4 touchdowns (on 61 carries) to Boston College in a 30-16 loss. Junior linebacker Tyshon Fogg (6’1″, 237 lbs.) leads the team with 33 tackles. Former Michigan linebacker Drew Singleton (6’2″, 233), a redshirt sophomore, should be the starting weakside linebacker despite just 12 tackles and 0.5 tackles for loss so far this year. The defensive line is not particularly large or explosive.
Advantage: Michigan 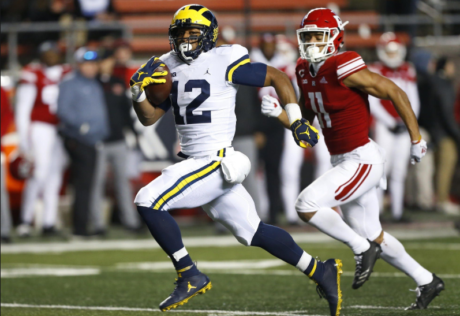 Rutgers is getting better. Don’t get me wrong – Rutgers isn’t close to being a good team. But they lost to Wisconsin by a score of 31-17, they lost to Northwestern 18-15, and they put up a better fight than most expected against Michigan, even though it ended up a 42-7 blowout. They couldn’t handle Michigan’s defensive front, so they were limited to throwing screens and trying to throw the ball, but they have some capable running backs. And Artur Sitkowski is a former 4-star quarterback, so he’s about the best talent they’re going to get at that position.

END_OF_DOCUMENT_TOKEN_TO_BE_REPLACED 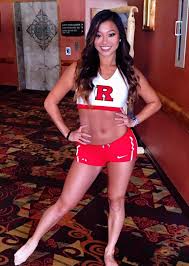 Michigan has worked its way up to #30 in rushing offense (218 yards/game), and they’re tied for #29 at 5.04 yards/carry. The running back group is led by Karan Higdon, who has dominated the carries in the backfield; he has 173 carries for 963 yards (5.57 YPC) and 7 touchdowns. Quarterback Shea Patterson (51 carries, 187 yards, 2 TD) is second on the team in carries, just one ahead of backup running back Chris Evans (50/251/3). Despite talk about a vastly improved offensive line, Michigan is just #64 in Line Yards and #67 in Standard Down Line Yards. It’s still a slog at times, but the threat of the QB run has opened up a few things. Rutgers is #120 in rushing defense (234 yards allowed/game), and they’re allowing 5.64 YPC (#122). Wisconsin and Illinois both ran for 300+ yards on the Scarlet Knights, and Kansas was up over 400. Senior weakside linebacker Trevor Morris (6’1″, 228 lbs.) leads the team with 81 tackles, while senior middle linebacker Deonte Roberts (6’1″, 235) is second with 71. They’re #90 in tackles for loss, led by sophomore defensive end Elorm Lumor (6’3″, 246) with 6.0. None of Rutgers’ top four defensive tackles is above 300 lbs. This should be a good matchup for Michigan.
Advantage: Michigan