What record will Michigan have after those eight games?

A quick look at Michigan’s 2017 schedule 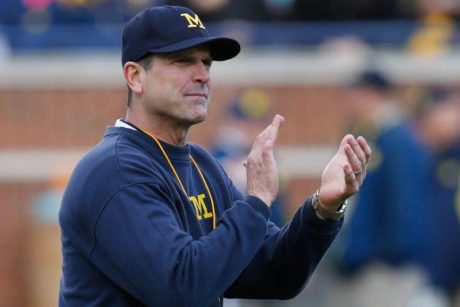 There’s been a lot of talk about Michigan’s 2017 schedule. Some people think Michigan blew a prime opportunity to go undefeated and make the playoff in 2016 because of an easy schedule, and now they’ll have a tougher go of it in 2017. Here I’ll take a glance at what’s coming this fall with the teams’ 2016 win-loss records in parentheses:

END_OF_DOCUMENT_TOKEN_TO_BE_REPLACED

Michigan will play UMass again in 2012

Michigan released its football schedule for 2012 and UMass will be coming back for more.  That’s right, the Minutemen will look to finish off the comeback from their 42-37 loss to the Wolverines last year.  Of course, UMass will be a part of the Mid-American Conference by 2012, so it’s not quite  as big of a step up as it was when they play in the FCS, but they probably won’t have very good FBS talent by then.  This ought to be an easy victory to lick the wounds from a likely season opening loss to Alabama.  For look back at last season’s game, here are a couple links to . . .

vs. Alabama (at Cowboys Stadium)
vs. Air Force
vs. Massachusetts
at Notre Dame
at Purdue
vs. Illinois
vs. Michigan State
at Nebraska
at Minnesota
vs. Northwestern
vs. Iowa
at Ohio State