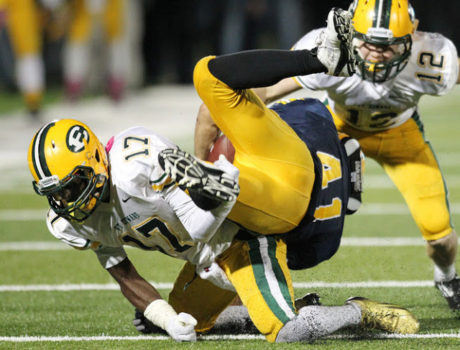 Crawford had long yearned for a Michigan offer, but he had to wait a little while to get it. (By “a little while,” I mean after he publicly stated wanting one – anyone who gets an offer during their sophomore year is pretty advanced in the process.) He had claimed that a Michigan offer could very well end his process early, but as we often see, he held off on a commitment after saying that. He took a spring visit to Miami that went well, but it didn’t match up to his Michigan experience, so he ended up committing just prior to his junior season.

I see a lot of good things to like about Crawford. As an offensive player, he’s shifty and fast enough to run right by most high school defensive backs. If he gets in the open field, you can forget about catching him. But he will probably play defensive in college. As a cornerback, the first thing that jumps out is his tackling ability. Unlike, let’s say . . . Cullen Christian or J.T. Floyd, Crawford is a very solid tackler. He does try to throw his shoulder into ball carriers on occasion, which will have to be coached out of him, but generally he wraps up, drives his feet, and gets the most out of his 171 lb. frame. Especially for someone his size, he’s about as good of a tackler as you’ll find. He has fluid hips and changes direction well. With his low center of gravity, he has the ability to break quickly on underneath routes and cause deflections, fumbles, etc. If he gets the ball in his hands, he can burst upfield through small windows and burrow for some extra yards.

I have some questions about his overall ability as a cornerback. We don’t see him much in man coverage; instead, he spends a lot of time in zone, reading plays, coming up to support the run, and causing some havoc underneath. I would like to see whether he can flip his hips to run with receivers in man coverage, and whether he can turn his head to find the ball and make a play. This is not so much a criticism but a curiosity on my part.

In my opinion, Crawford projects best as a nickel corner in Michigan’s defense. He’s excellent in run support and could presumably be a capable blitzer off the edge with his physicality, even if he’s lacking some size. He’s physical enough to reroute receivers and fast enough to stay with some of the smaller guys that teams will throw out there in the slot. I also think he would be great as a Cover 2 corner, but Michigan hasn’t run a ton of Cover 2 during Greg Mattison’s stint as a defensive coordinator. Crawford also has the skills to help out in the return game down the road.

This is Michigan’s fifth commitment in the class of 2015 and the first defensive back. He attends the alma mater of redshirt freshman offensive guard Kyle Kalis.

ADDED TO THE BOARD: 2015
St. Paul (MN) Cretin-Derham Hall defensive end Jashon Cornell was offered by Michigan.  Cornell is a 6’4″, 230 lb. prospect with offers from Florida, Notre Dame, Ohio State, USC, and Wisconsin, among others.  Notre Dame is thought to be the leader because of a couple relatively recent alumni heading to South Bend (WR Michael Floyd, WR James Onwualu), but it’s also the alma mater of OT Seantrel Henderson, who first committed to USC before ending up at Miami.  As a sophomore in 2012, he had 52 tackles, 26 tackles for loss, 14 sacks, and 3 forced fumbles.

Lakewood (OH) St. Edward cornerback Shaun Crawford was offered by Michigan.  He’s a 5’9″, 170 lb. prospect with offers from Arkansas, Florida State, Miami, Penn State, and Tennessee, among others.  As a sophomore in 2012, he had 66 tackles, 3 tackles for loss, 1 sack, 2 interceptions, 3 pass breakups, 2 forced fumbles, and 1 fumble recovery; he also had 24 catches for 438 yards and 5 touchdowns.

Warren (OH) Harding defensive end Hjalte Froholdt was offered by Michigan.  He’s a 6’5″, 265 lb. prospect with no other offers at this time.  Froholdt grew up in Denmark and played his first season of football in America (though he played the sport in Denmark, too) as a sophomore last season.  Harding is the alma mater of former Michigan wide receiver Mario Manningham, linebacker Prescott Burgess, and linebacker Carl Diggs, as well as a couple recent Michigan signees who flamed out (LB Davion Rogers, WR D.J. Williamson).

OFF THE BOARD
Upper Marlboro (MD) Wise safety Marcus Allen committed to Penn State.  In case you’re wondering, I can find no indication that he’s related to the  Marcus Allen . . . you know, the one who ran for over 2,300 yards in one season at USC, won the Heisman, and was the second best Los Angeles Raiders running back in Tecmo Bowl.  The younger, unrelated Allen never showed significant interest in Michigan.

MISCELLANEOUS
Here’s a list of the visitors from this past weekend.