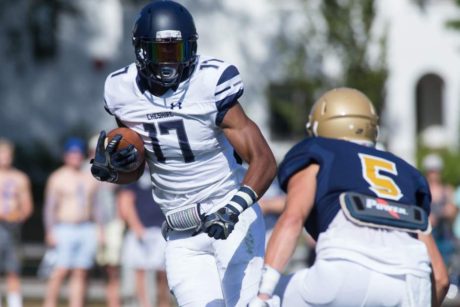 Cheshire (CT) Cheshire Academy wide receiver Tarik Black committed to Michigan on Wednesday afternoon during a ceremony at his school. He picked the Wolverines over offers from Alabama, Auburn, Connecticut, Georgia, Michigan State, Notre Dame, Stanford, and UCLA, among others.

Hit the jump for more on Black’s recruitment.

Black was offered by Michigan in the spring of 2015, just a few months after Jim Harbaugh was hired. He was already interested in Michigan, so the offered piqued that interest. But there were still some ups and downs throughout his recruitment, including times that people thought he might go to Alabama, Notre Dame, Ohio State, or Stanford. The belief in Notre Dame as his future destination was strengthened when his high school teammate, RB/DB C.J. Holmes, committed to the Fighting Irish. However, Black – who visited Michigan numerous times, including for a game as a junior, the BBQ at the Big House, a spring tour, a game as a senior, and then this past weekend – always seemed drawn to the Wolverines. He has reportedly been a silent commit to Michigan for the past several weeks.

Black’s best asset is his tall, long frame that should give him the ability to be a guy who can catch jump balls and fade routes. He should also be a nice, big target working over the middle of the field. He uses his hands well to catch the ball, and there are highlights of him reeling in both high and low passes. He plays football like a basketball player, and while Michigan hasn’t done a lot with jump balls over the past couple seasons (maybe in part because they don’t have many big, physical options), that could become a part of their repertoire if they have the right personnel. Black has some good change of direction skills and isn’t just a straight-line player. He doesn’t appear to have much of an opportunity to run a lot of complicated routes, but he seems to be willing to run good routes and has the necessary skills to set up defensive backs. He also shows some good blocking ability and willingness to push defenders around, and his size and length should help him in that area.

On the down side, Black doesn’t have great long speed. So while he changes direction well, he may not be the type to break huge plays. There are also times where he carries the ball loosely and away from his body, something he will have to improve at the next level to prevent trailing defenders from raking out the ball. Adjusting his route running and learning the proper techniques for running a variety of routes might be an area in which to improve, too.

Overall, Black is a good pickup for the Wolverines. He will be facing a significant step up in competition after attending private school in Connecticut, but his skills should translate well. He’s more athletic than Michigan “jump ball” guys of recent vintage like Csont’e York and Jaron Dukes, neither of whom worked out at Michigan. Drake Harris might be the closest thing Michigan has to that guy at the receiver position right now, but he’s never been particularly physical and still isn’t as big as Black’s listed weight, even after three years on campus. The guy that comes to mind is a bit of an obscure blast from the past in Tyrece Butler, who played at Michigan in the early 2000s during the John Navarre era. Butler was 6’3″, 211 lbs. and his most productive year included 21 catches for 199 yards in 2002. However, he had the unfortunate luck of playing second (or third) fiddle to the likes of Marquise Walker, Braylon Edwards, and Jason Avant during his career. Black has the talent to outstrip Butler’s production, but I think they’re pretty similar players.