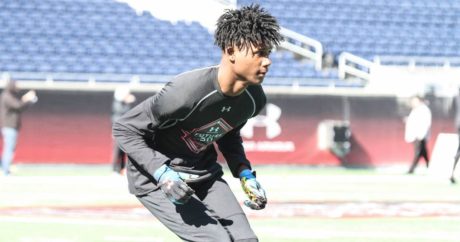 Hollywood (FL) Chaminade-Madonna cornerback Te’Cory Couch committed to Michigan on Sunday. Previously committed to Tennessee, he also had offers from Kentucky, LSU, Miami, and Wisconsin, among others.

Hit the jump for more on Couch’s commitment.

Michigan offered Couch back in January, along with a couple of his teammates. Couch had been committed to the Volunteers since June of 2017, but he was considered a soft commitment. Going into an official visit this past weekend for Michigan’s spring game – which was canceled – there were rumors swirling that Couch was the most likely visitor to commit. He ended up pulling the trigger while he was in Ann Arbor.

Regarding Couch’s size, I think he has hit a growth spurt over the past couple years, because I don’t think height is a real issue. While he’s not huge, he claims to be 6’1″ on his Hudl account, and he’s probably somewhere between there and 5’10”. He has the ability to be physical at the line of scrimmage, though he’s not consistent with it (perhaps by design). He has good hips, and he does a good job of finding the ball in the air. He’s also a solid tackler who can help support in the run game.

Couch doesn’t have elite speed, and by the looks of the first highlight on his reel, he’s not particularly dynamic with the ball in his hands. He plays a lot of man coverage, but he needs to be more consistently physical at the line of scrimmage or else his speed will get taken advantage of in college. He also needs to add size and strength, because even at 166 lbs., he would struggle to deal with bigger players in college.

I think Couch is a good fit for Michigan. He shows in his film that he can play bump-and-run coverage, and he’ll be doing a lot of that in Ann Arbor. Michigan has done well with corners who aren’t the fastest, such as Brandon Watson and Channing Stribling, so I think Couch can do similar things.

Michigan now has 8 commitments in the 2019 class, and Couch is the first defensive back. The Wolverines took four defensive backs in 2018. After this season they are scheduled to lose Brandon Watson and Tyree Kinnel, though there could be other departures from underclassmen.