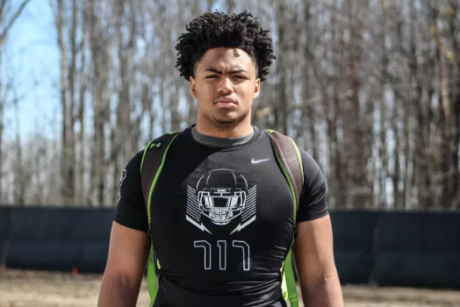 Belleville (MI) Belleville defensive end Tyrece Woods committed to Michigan on Sunday night. He actually has yet to play a down at Belleville, but he transferred there from Detroit (MI) Martin Luther King, Jr. following his junior year. Woods picked the Wolverines over offers from Air Force, Cincinnati, Fresno State, and a bunch of MAC programs.

Hit the jump for more on Woods’s commitment.

If you’re an avid reader of this blog, you have seen Woods’s name popping up over and over again for several years. When he was going to Detroit (MI) King, he would tag along with teammates (Donnie Corley, Lavert Hill, etc.) to Michigan quite frequently for underclassman days, the BBQ at the Big House, etc. I’ve been posting about him since he was in eighth grade. He was dying for an offer from Michigan, and it was clear to me that if Michigan ever offered, they would be almost impossible to beat. He camped at Michigan in mid-June, got an offer on June 18, and the rest is history.

First of all, it’s nice to see a kid who is such a big fan and has worked really hard at this goal to be able to achieve it. There’s a lot to be said for desire and hard work, and you need those “program guys” who can bust their tails for Michigan. He wants to be in Ann Arbor. Woods mostly played a wide-9 technique at King, where he was tilted toward the offensive tackle. He has a decent get-off for a strongside end or interior lineman, and his speed is adequate. There’s a little bit of nastiness in him, and he can be physical at times.

On the negative side, Woods is not a freak athlete. He claims a 4.78 forty, which I do not believe to be accurate. At 6’2″ and 240-255 lbs., there’s only a certain amount of growth to be expected before he will max out. Woods does not change direction extremely well, and there are times where he lacks the “killer instinct” to finish plays. I have issues with his stance (his butt is too low), but that can be corrected. I also don’t think he’s violent enough with his hands; he doesn’t strike offensive linemen.

Overall, Woods looks like a program guy to me based on his junior film. He lacks the explosiveness to play on the edge, and he will probably need to convert to defensive tackle sooner or later. His get-off can be a plus on the interior, so it will depend on how well he can learn to strike and how strong he can get in the weight room. Otherwise, I see the college game moving too fast for him. He reminds me of Ken Wilkins (see: “Ken Wilkins, Wolverine” from June of 2009), a guy who started out as an edge guy before outgrowing the position.

Michigan lost defensive end Stephen Herron to Stanford not long ago, and they have now replaced him with Woods, though Herron was a WDE and Woods is probably more of a strongside or interior guy. The Wolverines now have 20 commitments in the class of 2019. After a long stretch of being unable to successfully recruit Belleville, Michigan currently has two commitments from Tigers: Woods and 2020 cornerback Andre Seldon.