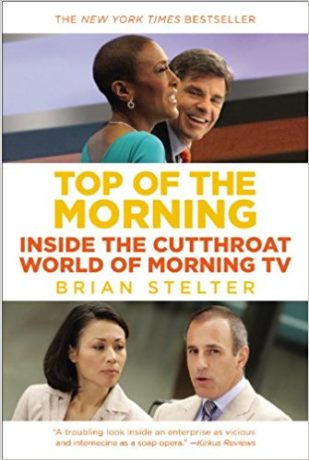 I haven’t posted one of these in a while, but I had a chance to finish Top of the Morning: Inside the Cutthroat World of Morning TV by Brian Stelter recently. Top of the Morning tells the story of the race for domination – or at least a solid lead – in Nielsen ratings for morning shows. It mainly focuses on Today and Good Morning America, and I never realized before reading that Today held such a commanding lead in the ratings for 16 straight years. A large chunk of the book is dedicated to discussing the awkward transition from Ann Curry to Savannah Guthrie, as well as the audience’s growing frustrating aimed at Matt Lauer – and that was before Lauer’s sexual harassment stuff came to light. Meanwhile, Good Morning America‘s struggles were outlined over the years, but Stelter’s treatment of the likes of Robin Roberts and George Stephanopoulos is almost fawning. I can’t tell if Stelter had a bone to pick with Today or if he was just being a straight shooter, but the modern GMA lineup could do almost nothing wrong.

I’ve never been a morning show enthusiast by any stretch of the imagination, and usually it’s just background noise to me, if it’s on the television at all. Before I started reading the book, I couldn’t have even told you whether Lauer was on Today or GMA. But I am interested in underdog stories and seeing how people succeed when not as much is expected of them. It was interesting to me that two of the major players in GMA‘s turnaround were not traditional reporter types, while Today employed people who were always in front of the camera reporting news. Robin Roberts was a renowned basketball player and then worked at ESPN, while Stephanopoulos was in the political realm before taking the full-time TV gig. Sometimes, maybe there’s an advantage to being an outsider.

Tags: what I've been reading
Spread the word!