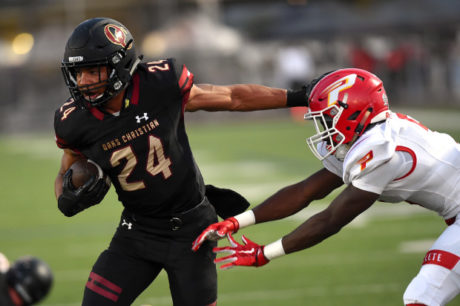 Hit the jump for more on Charbonnet’s commitment.

Michigan has been on Charbonnet for months, but he has remained somewhat under the radar because he’s a very quiet kid. He doesn’t participate in a lot of camps or the recruiting shenanigans normally employed by high-profile running backs, especially in California. (So maybe he’s not a high-profile running back?) He has taken a couple visits to Michigan, and his most recent flight to Ann Arbor was so under the radar that it wasn’t reported by the recruiting sites until he was already on campus. His commitment took place shortly after leaving on Sunday.

Charbonnet is terrible. He’s probably the worst running back in the history of the lower 48 states. I’m surprised that San Jose State offered him, let alone Michigan. I wouldn’t even let him play against me in Madden. (I hope I’m doing this right, because my track record on running backs is weird.)

In all seriousness, Charbonnet has a good frame at 6’2″ and 215 lbs., and even if he’s a little short of those measurements, he should hold up well in college. He doesn’t need to add a lot of weight to be college-ready, and in fact, he should be able to step in to play immediately, at least from a physical standpoint. I like his patience to the hole and his burst through it. He has good vision, and he’s not a one-cut-and-go runner – he’s a guy who can make multiple cuts on the same play. In fact, he has some excellent jump cuts and lateral mobility, which are reminiscent of Fitzgerald Toussaint, but Charbonnet is bigger. He has good acceleration and speed, and he’s not afraid of contact.

On the negative side, Charbonnet carries the ball too low and loose for my liking, and he will need to work on his ball handling or else he’s going to turn the ball over in college. He is also somewhat tall for a running back, which has not necessarily been a positive quality for Michigan running backs in recent years.

Overall, I like Charbonnet a lot. This is not good for him. He will be relegated to the bench in favor of some 5’10” or 5’11” guy who’s TOUGH AS NAILS!!!!! I haven’t seen film on all 19 or 25 running backs rated ahead of him by Rivals or ESPN, respectively, but I have a hard time imagining those guys are all better. But they are, because Michael Cox and Brandon Minor and Ty Isaac were all guys I liked, but all-timers Vincent Smith and Sam McGuffie and De’Veon Smith made them irrelevant.

Michigan now has 13 commits in the class of 2019. He’s the first running back and just the third skill player, joining QB Cade McNamara and TE Erick All. Just like All from Fairfield (OH) Fairfield, Charbonnet would be the first player from the famed Oaks Christian to play at Michigan. The Wolverines probably want to grab at least one more running back, even though they took several in the 2018 class.