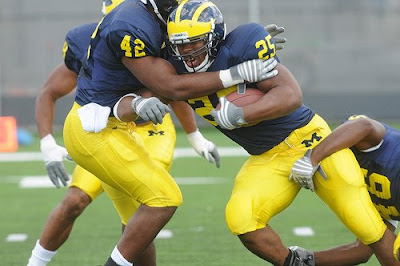 Demens looks to be the top backup for the middle linebacker position. He initially used up his eligibility last year but was awarded a redshirt after injuring his shoulder and not playing after the Miami game. With recruiting looking the way it does now, Demens might be the very early frontrunner for the 2011 middle linebacker job.

Fun fact: I watched my alma mater get destroyed by Detroit Country Day when Demens was a sophomore. Not knowing who he and Jonas Gray were at the time, I said to a friend, “Whoever those two kids are, they’re going to be playing Division I next year.” Little did I know that, as good as they were, they both still had two years of high school left.