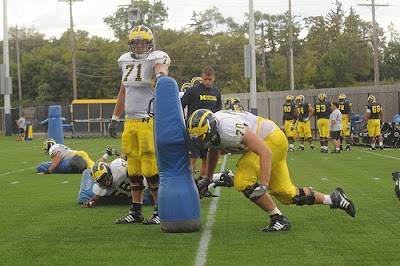 Height: 6’9″
Weight: 325 lbs.
High School: John Glenn High School in Bay City, MI
Position: Offensive tackle
Class: RS Junior
Jersey Number: #72
Prediction for 2009: Mop-up duty
Nowicki is a walk-on who played the majority of the Miami (OH) game in 2008 when Mark Ortmann injured his elbow. He’s played sparingly the past two seasons and while he’s behind Ortmann, Huyge, Dorrestein, and Omameh on the depth chart, he could see some mop-up time or be inserted if there are injuries. As we saw last year, Rodriguez would rather play Nowicki than burn a freshman’s redshirt.
Fun fact: Nowicki won the Egg Eating Contest at the Night of Champions earlier this year.