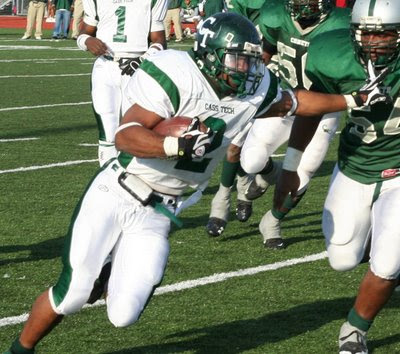 Another true freshman from Cass Tech High School, Teric Jones arrives as a slot receiver or running back; he is most likely headed for the slot receiver position, but he could provide depth and versatility in the backfield if necessary. Jones is listed at 5’9″ and 186 lbs., so he’ll have enough size to take a bit of a beating if he plays some running back.

Jones will probably watch from the sideline for the entirety of the 2009 season, but he has excellent speed (he reportedly ran a 4.37 forty at last year’s Army All-American combine) and considering Michigan’s poor return teams last season, if Jones can help in the return game, the coaches will let him. However, I expect that last year’s skill players will iron out their issues with fumbling and muffed punts, so that probably won’t be necessary.