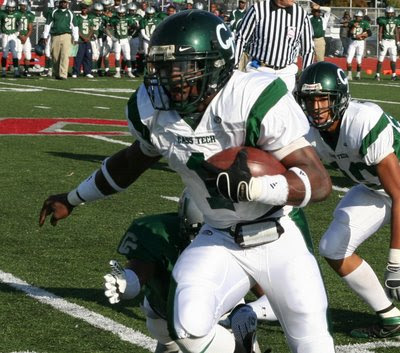 Thomas Gordon is a true freshman free safety from recently-established Michigan pipeline Cass Tech in Detroit. His Rivals profile listed him at 5’10” and 199 lbs., although that seems a bit generous, at least in the weight department. Gordon played quarterback at Cass Tech for the entirety of his career until his senior year, when he also took over their starting free safety job.
Being a recent convert to the position, as well as being undersized, Gordon is almost surely headed for a redshirt in 2009. But because of a lack of depth in the defensive backfield, if there are any injuries at all, Gordon might find himself forced into playing time. Gordon’s scholarship offers came mostly from MAC schools plus the two in-state powers, Michigan and MSU. I would find it surprising if Gordon plays a significant role on defense at any point in his Michigan career. He’s a bit small, and late-high school or early-college position changes typically take a bite out of any chances to make an impact early.