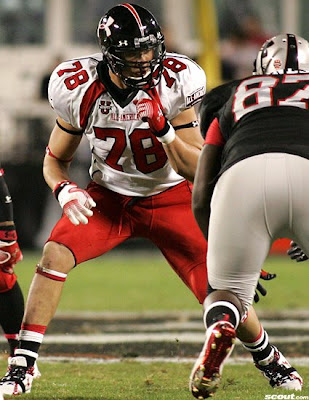 Offensive tackle Taylor Lewan reminds many (including me) of former Michigan player and former #1 draft pick Jake Long. Both are tall (6’7″), agile for their size, and relentless blockers. Extending that comparison, Lewan should redshirt in 2009 and when the Lions are the worst team in the NFL in 2013, Lewan can be chosen #1 and move an hour east and wear Honolulu blue.
Okay, it’s over the top to expect Lewan to replicate Long’s career. But I do expect him to be a good player in Rich Rodriguez’s zone blocking scheme. He could push for playing time in 2010 when he’ll battle Patrick Omameh, Ricky Barnum, Mark Huyge, and Perry Dorrestein for a starting spot. As for now, you can see in the picture above that he has some filling out to do. He also didn’t play much offense until his senior year, so his technique is going to need refinement. I will be surprised if he starts any sooner than his third year.