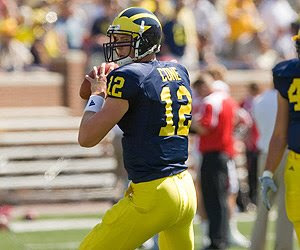 David Cone starts out the list. At 6’7″, 222 lbs. and painfully unable to play quarterback at this level, Cone is extremely unlikely to see meaningful snaps in 2009. At best, he’s probably fifth on the QB depth chart behind Nick Sheridan, Tate Forcier, Denard Robinson, and Justin Feagin. And based on what I saw in the spring game, I’d put walk-on Jack Kennedy ahead of Cone, too. If Cone takes a snap this season, it’s because we’re up 76-0 on Delaware State . . . or it’s because we’re getting blown out and the redshirt junior probably won’t get offered a fifth year.