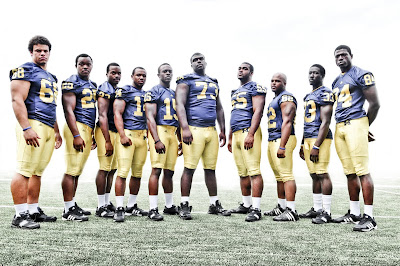 Here are my 2009 season predictions for Michigan’s football team.
Starting quarterback: Tate Forcier has already been named Saturday’s starter, but I predict he’ll start every game this year . . . with a caveat. Obviously, he could get injured. But also, I can imagine an instance in which Denard Robinson may take a few snaps to start a game just to catch an opponent off guard. Robinson will get changeup snaps, but Forcier will be the “starter.”
Leading rusher: Brandon Minor is dinged up and it’s unclear how much he’ll play on Saturday, if at all. Carlos Brown is a capable runner, but I think Minor will end the season as Michigan’s leading rusher with about 900 yards.
Leading receiver: Because of more depth at slot receiver, which will offer Martavious Odoms a blow, I think his receptions will dwindle slightly. I expect Greg Mathews to lead the team in receptions by a slight margin, probably around 50 for 650 yards.
Leading tackler: Obi Ezeh is a natural choice due to his position, but Jonas Mouton might make it close. I’ll stick with Ezeh as my choice but I’m more excited to see what kind of athleticism Mouton will bring to the table.
Leading sacker: Brandon Graham should lead the team in sacks, but I’m afraid he won’t put up the numbers many Michigan fans expect. He’ll face a lot of double teams and challenge for the Michigan season record, but I think he’ll probably max out at 10 sacks.
Leading interceptor: Donovan Warren is really the only choice here. Neither Troy Woolfolk nor Michael Williams, the two safeties, has an interception in his career. Boubacar Cissoko is also interceptionless, albeit in limited playing time as a freshman. Warren is the leading thief in the defensive backfield with two career INTs. I’ll guess he picks off three in 2009.
All Big Ten 1st Team: Zoltan Mesko should be the best punter in the Big Ten. Graham won’t have the overwhelming season many predict, but he will be very good. If Minor were healthy, I might choose him over John Clay. But since it looks like he’ll be missing some time with bumps and bruises again, I’ll leave him off this list.
Leading scorer (non-QB, non-kicker): Brandon Minor.
Breakout offensive player: Junior Hemingway, by virtue of being healthy for the first time, should be the breakout player on offense. Neither starting outside wide receiver has oodles of speed, but Hemingway has the size and athleticism to make some tough catches.
Breakout defensive player: I think Troy Woolfolk is going to be good. Very good. He’s got great speed, and on top of that, he’s a solid special teamer, which bodes well for his prospects at the strong safety position.
Most disappointing offensive player: I think Kevin Koger will disappoint a lot of fans. I don’t think he’ll be a bad player, but he won’t see the level of involvement that many Michigan fans expect. Michigan’s coaches have visited ways to involve the tight end more, but WVU’s tight end history combined with a freshman quarterback behind center will prevent Koger from getting many balls thrown his way. He’ll be involved in different formations and blocking schemes, but I doubt he’ll pull in more than 15 catches.
Most disappointing defensive player: Ryan Van Bergen has been overhyped. He’s a high-motor guy who might occupy blockers and force a few pile-ups, but he’s not a kid who’s going to make a ton of plays or rack up jaw-dropping statistics. Again, I don’t think he’ll be a bad player, but don’t be surprised if you see him end the season with 20 tackles and only one or two sacks.
The BIG FINISH:
Sept. 5 vs. Western Michigan: WIN. Michigan won’t drop another one to a MAC opponent.
Sept. 12 vs. Notre Dame: LOSS. This might be a shootout. Notre Dame has a lot of talent that’s maturing. Unfortunately, I think Jimmy Clausen might pick apart our inexperienced defense.
Sept. 19 vs. Eastern Michigan: WIN. Eastern has a new head coach and not much talent.
Sept. 26 vs. Indiana: WIN. Indiana isn’t very good.
Oct. 3 at Michigan State: WIN. Michigan will come back with a vengeance this year. MSU has a very good linebacker in Greg Jones, but they won’t be able to stop Michigan’s running game.
Oct. 10 at Iowa: LOSS. Iowa plays tough defense and I think they’ll give Michigan’s offense fits. This might be the most frustrating loss of the season, because Iowa lacks talent but is well coached by Kirk Ferentz.
Oct. 17 vs. Delaware State: WIN.
Oct. 24 vs. Penn State: WIN. I don’t think Penn State will be as good as many of the experts think. They’re thin at defensive end, lost their starting MIKE to injury, and they lost a ton on offense. This will be Michigan’s upset victory of the year.
Oct. 31 at Illinois: LOSS. Illinois knows how to defend the spread option, and Juice Williams to Arrelious Benn will be a great combination.
Nov. 7 vs. Purdue: WIN. Purdue will not be very good this year. Michigan probably would have won that game last year if Rodriguez didn’t make the bad decision to switch to the 3-3-5 stack.
Nov. 14 at Wisconsin: LOSS. Wisconsin plays tough at home.
Nov. 21 vs. Ohio State: LOSS. Unfortunately. Grrr.
Final record: 7-5