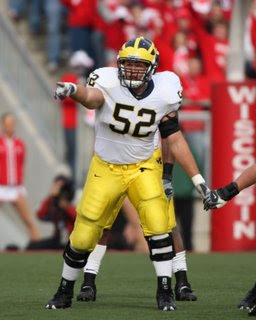 Schilling was a very highly touted recruit from the Pacific Northwest in 2006. Early in his career, he had issues with mononucleosis and a shoulder injury that prevented him from working out for much of his first year in college. Regardless, he became a starter at right tackle in 2007. Suspect in pass protection, Schilling played a bit at right guard in 2008 and moved inside full-time in 2009, starting every game at left guard. He has started every game over the past three seasons except for the 2008 contest against Ohio State, and begins 2010 with 36 career starts.

The Wolverines will be counting on Schilling’s leadership and run blocking in 2010. With a solid season, Schilling could squeeze into the middle rounds of the 2011 NFL Draft. He has good size and he’s a solid 308 lbs. He lacks the lateral quickness and balance to play tackle in the NFL, but he could project at guard for an NFL team. With his experience and talent, Schilling could be ranked higher. However, the depth on Michigan’s offensive line diminishes his importance somewhat. There are capable backups on the team in the form of Elliott Mealer, Ricky Barnum, and John Ferrara. Hopefully, though, Schilling is making his 49th career start sometime around New Year’s Day 2011.

Apparently, the populace thinks I’m underrating Schilling here. He was tied for the sixth-leading vote-getter, behind Cameron Gordon (28%), Ryan Van Bergen (21%), Jonas Mouton (19%), J.T. Floyd (12%), and Troy Woolfolk (5%). Remember that I finished this list prior to Woolfolk’s injury and will not be recalibrating his placement on the list, so take that into consideration before you vote.