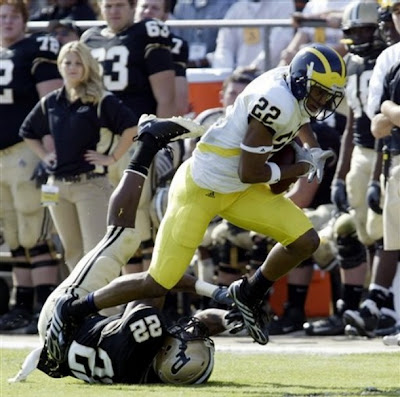 Stonum has been one of the more frustrating components of Michigan’s team over the past year or so. He committed to Lloyd Carr’s Wolverines and then enrolled early in January 2008 for spring practices run by Rich Rodriguez. At the time of his entry to the University of Michigan, it was assumed that he would be Michigan’s next great deep threat due to his excellent speed and acceleration. However, he suffered from a case of the Dropsies at times, and he doesn’t always run his routes with maximum effort. Furthermore, his quarterbacks for the past two seasons have been less than stellar, a phrase that could also be used to describe his decision-making – Stonum received a DUI as a Wolverine, too.

Now it’s 2010 and Stonum is an upperclassman. While he was an elite kick returner in 2009, his receiving stats weren’t anything to write home about. He averaged just over one catch per game, although in fairness, those passes were being thrown by true freshmen. The deep passing game has been somewhat de-emphasized, whether by scheme or necessity. Therefore, most of the passes we’re seeing are hitches, slants, or bubble screens, not deep posts, fly patterns, etc. Stonum has the talent to make plays on deep balls and run away from defenders, but the opportunities have been few and far between. But the 2010 season will see the use of quarterbacks who have actually taken college snaps before, whether that QB is Denard Robinson or Tate Forcier. This should improve Stonum’s stats, although the quarterbacks have grown to love targeting slot receiver/wideout Roy Roundtree. Roundtree might lead the team in receptions and receiving yards, but Stonum’s ability to get deep as well as return kickoffs makes him one of the most important members of the 2010 squad.

The leading vote-getter for #13 on the list was Cameron Gordon with 25% of the votes. Stonum finished second with 18%.